The homelessness problem isn't gone from Salem, but walking around downtown it might look like it. In fact, it's a growing problem with no perfect solution. 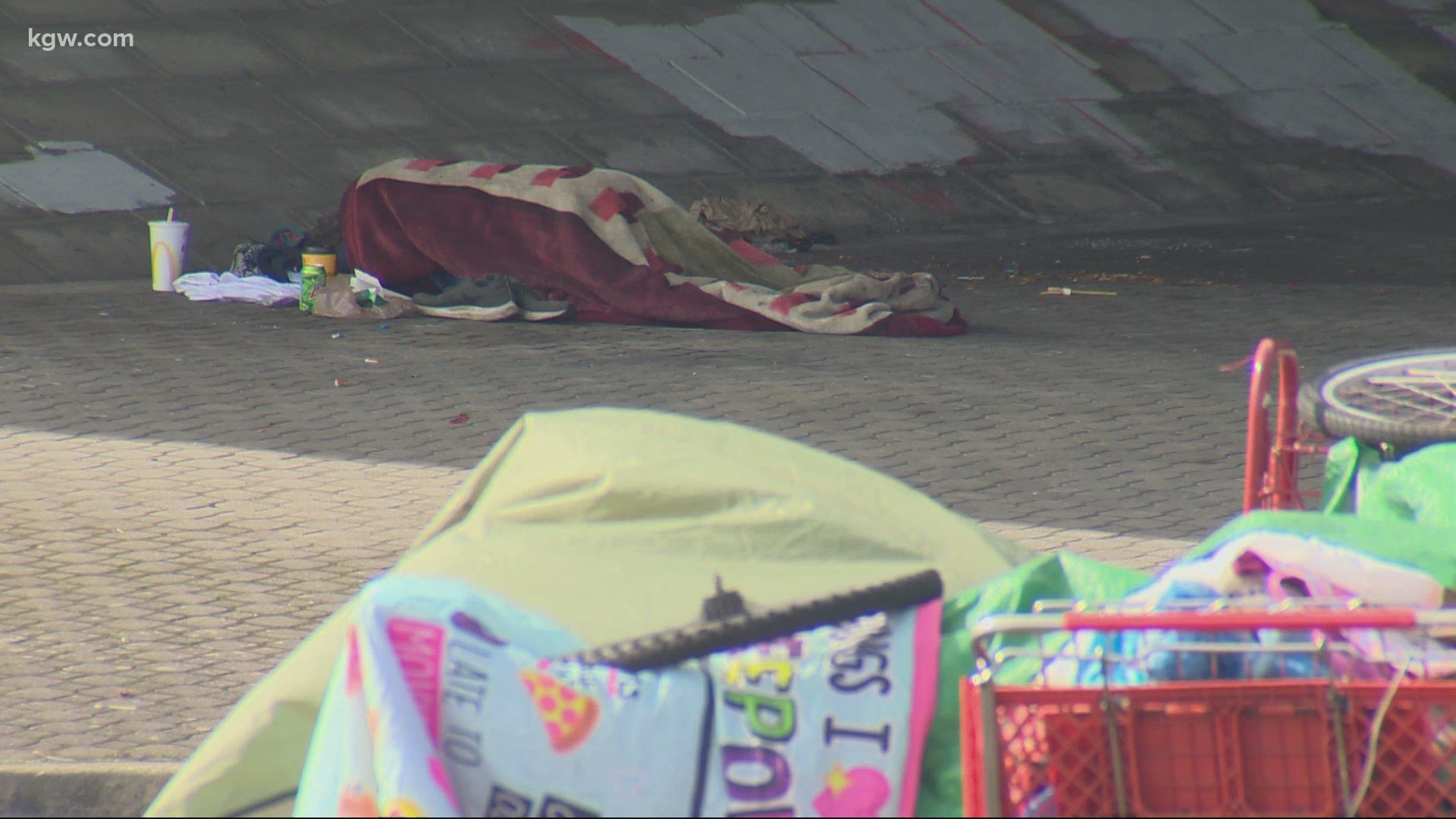 SALEM, Ore. — Driving south on I-5, the reality of Salem’s housing crisis greets drivers before they’ve even exited the interstate.

Dozens of people fill the grassy plots of land surrounding the intersection where Market Street crosses under the interstate.

Michael Warren is one of them. He set up his tent weeks after evacuating from Mill City, while wildfires raced his way.

“I never thought the world would be like this, you know. I never did,” he said in an interview Wednesday.

Warren said the Red Cross initially set up him up at the Oregon State fairgrounds, before getting him a room at the Days Inn by Wyndham Black Bear.

The motel’s manager, he said, ordered him to leave because he wasn’t keeping his room clean, which Warren denied. KGW has reached out to the Red Cross Cascades Region and the motel. Neither has commented.

Warren, who has nerve issues in his back, can barely walk.

“I've never been dealt with anything like this before. I've been through some rough stuff but I've never been treated like that. I feel like we're nobodies” he said. “We've been left alone, left to do nothing, left to die.”

Feet away from his tent, Tony Mathis is camping with his dog Angel.

The pair lived in an apartment until a few months ago, when Mathis says a clerical error stalled his social security checks.

Unable to pay rent, he left, and while the problem has been fixed, he said finding an apartment during a pandemic is hard.

Mathis added he’ll stay on the grassy property along I-5, land controlled by ODOT, as long as he can.

Finding an apartment during a pandemic is hard.

Finding a place to camp in a city shepherding, what appears to be, a growing homeless population to a limited list of parks, parking lots and shelters may prove harder.

Back in early March, downtown Salem, with its sidewalks covered by overhangs and easy bathroom access, was a big draw for the city’s homeless.

But business owners Downtown were frustrated, arguing camps were scaring away customers.

Then the pandemic hit, and people worried about COVID spreading between those living on the streets Downtown.

So the city, declaring an emergency, restricted camping on public sidewalks and in other areas. In exchange, they opened up Salem’s parks.

Wednesday afternoon, there wasn’t a tent in sight.

City officials say, while business owners are happy, it’s a band-aid on a much bigger problem.

According to the 2019 Point in Time Count, 1,462 people were homeless in Marion and Polk Counties. Of the nearly 1,500, 866 of them were unsheltered, meaning they literally sleep outside. The rest are in shelters, transitional housing, or they’re living with friends or family.

In an interview Wednesday, Bennett said city officials and the non-profits they partner with are certain more people have become homeless since the pandemic began and since wildfires displaced countless local families.

The city, which had roughly 300 shelter beds available before the pandemic, is scrambling to keep up.

“Oh my goodness. I think it's imperative that all of us look together for more warming capacity and the right types of solutions so that we can meet the needs of all the people that are out there,” she said.

Bennett added the city is eyeing new options, which includes leasing an old DMV on Portland Road Northeast. Between using the building as a shelter and letting people living in their cars park in the lot, they estimate they could house roughly 70 people.

They’re also looking for businesses, churches and non-profits willing to host people living in their cars in their parking lots overnight.

In the meantime, places like Cascades Gateway Park and Wallace Marine Park are playing host to hundreds of people.

People living in tents roughly 100 yards away are allowed to camp in the park.

Bennett said they only evicted the ones that were broken down, leaking fluids or, in general, posed an environmental hazard.

Stuart Heinrich’s van is one of them.

He has no idea where he’ll go, but he has until Tuesday to figure it out.

“My phone's been broken so I don't have a phone. Lost my food stamp card so I don't have food stamps. And the door fell off my van so I can't drive anywhere,” he said. “Yeah, it's interesting because we're kind of forgotten.”