'We are pleading for your help': Oregon front-line workers reveal grim realities, beg for Oregonians to be vaccinated

Hospitals across the state are overwhelmed, health care workers are exhausted and the peak of the delta variant has not yet hit Oregon. 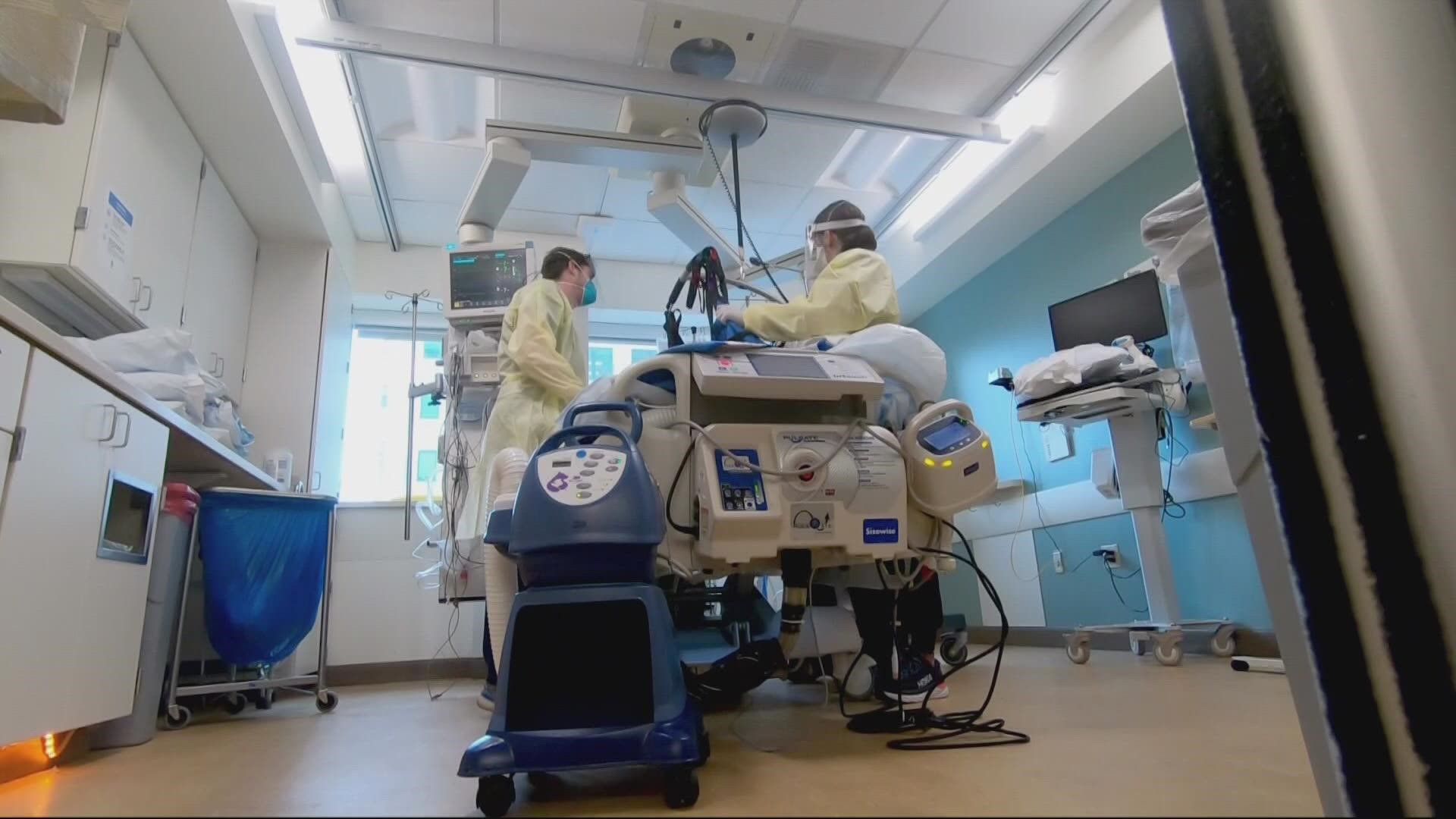 PORTLAND, Ore — All4Oregon, the four health care organizations responsible for the mass vaccination site at the Oregon Convention Center, which administered 550,000 doses, held a press conference that did not mince words. If Oregonians do not take immediate action, our health care systems will become overwhelmed as they are in danger of doing now.

The spread of the delta variant is unprecedented.

“We again join forces as All4Oregon and we plead with you and our communities that delta is different it’s creating a health crisis around our state," said chief medical officer at Legacy Health Seth Podolsky.

"This surge is both disheartening and preventable," he went on. "This week we set a record for statewide hospitalizations and this is not a record we want to be setting."

The delta variant is different, according to health officials. They are seeing patients who are presenting sicker, they're younger and there are more deaths among people who have fewer comorbidities.

"People most impacted by this are unvaccinated," Podolsky said. "With delta, we are seeing an increase of breakthrough infections. And while the vaccine generally protects against hospitalization or death, it’s not a guarantee. Let us not forget our children, kids under 12 not eligible to get the vaccine. Don’t we all have a responsibility to protect them?"

Beyond that, Oregon is facing what surgeon Mary Giswold called a perfect storm. The storm's elements include sicker patients who have delayed care due to the pandemic, the COVID surge and the fact that Oregon has fewer beds per 1,000 people than most states.

Health officials at all four hospitals detailed stories of patients waiting for intensive care unit (ICU) beds that simply are not there. Waiting for people to be moved to a lower level of care so others can be moved into their place. They expressed that people are being seen in lobbies and not being able to wait for rides home in their rooms because there is not room.

Two registered nurses spoke at the news conference to convey the grim realities of working in overwhelmed hospitals. They both expressed that they are exhausted, and they're seeing how the virus takes a personal toll on health care workers.

Debbie Sanchez, a registered nurse at Providence St. Vincents, said she was reduced to tears during her last shift.

"I helped a young girl get out of the car, she couldn’t even walk to the front desk. She said she was COVID positive and she couldn’t breathe," said Sanchez. This was the second time the girl had COVID. Sanchez said she asked her what was different this time from her infection in July.

"I am so much sicker, I think I am going to die and I need you to help me," Sanchez recalled the patient saying.

"One of the patients started declining and in a blink of an eye, we had to put a breathing tube in him because he couldn't breathe," Sanchez said. She said he had to be intubated in the emergency department instead of the ICU because there wasn't room for him. "Meanwhile, we had three more patients with no ICU beds."

She also said a man came in who had been delaying seeing a doctor due to the pandemic. He was diagnosed with cancer.

She closed her time with a plea for everyone to get vaccinated.

"Our staff are exhausted. With fewer staff and fewer beds, we are also scared for our families and coworkers." Sanchez said. "Sometimes we wonder if we are enough or if we’re doing enough. What we’re asking: get vaccinated. There is no reason for this to be delayed. We want the best for our communities, so please get vaccinated."

Likewise, Providence RN Levi Cole said he had been a nurse for 18-19 years and had worked in the ICU for the entirety of his career. He said the war has changed since the beginning of the pandemic.

"The enemy has gotten meaner and the society as a whole has let its guard down," said Cole. He recalled when people banged pots and pans to celebrate health care workers as heroes last year. He said health care workers are asking people to be their own heroes and get vaccinated.

He wants people to know the realities of COVID are watching someone die choking on their own blood, watching them die without their families. He too described patients that were sicker and younger.

Renee Edwards, chief medical officer at OHSU, said that most of the vaccinated cases that are ill in the hospital with COVID-19 have some other condition that makes them immunocompromised in some way.

She also spoke to the need for vaccination to combat another surge. With more people vaccinated, there are fewer bodies for the virus to enter and infect and mutate to create another dangerous strain the way the delta variant was created and eventually brought to the United States.

"As we have all said, we are in crisis and we desperately need your help," said Edwards. "If we all do our part now it will make a difference. Every mask, every vaccine, every attempt to limit social gatherings matters at this time. If you’re not vaccinated, you need to limit social interaction. Please encourage people to get vaccinated."

The health officials said their hospitals are working together to make sure things like communication, crisis care and patient moving are all as seamless as possible so they can make the most out of Oregon's limited resources.

PeaceHealth also held a news conference and echoed a lot of the same concerns.

"We got a few weeks ahead of us where things are going to be really hands on deck as we really take care of our community and then the numbers suggest it should start slowing down and reversing and we should see less patients in the hospital," said Lawrence Neville, chief medical officer for the PeaceHealth Columbia Network

PeaceHealth said on Wednesday, Aug. 25 that it had 69 patients in the hospital with COVID, 18 in the ICU.

"95% are unvaccinated, who come in with COVID and about 5% were vaccinated and had breakthrough," said Neville.

It, like other hospitals across the state, is having to make hard decisions to be able to care for the influx of patients.

PeaceHealth Southwest has started sending non-critical patients to care for themselves at home. They send them home with oxygen tanks and a pulse oximeter (to check their pulse) and very conservative instructions for if they don't feel well. Doctors and nurses check in on the patients twice a day to monitor either via phone or virtual visits. They want patients to keep their oxygen levels above 92%.

"One of the instructions is going to be, if you're feeling like you're worsening, your heart rate is going up, if you're having increased work of breathing, no matter the saturations to return to the emergency department to make sure that you're safe." said Jason Hanley, medical director for PeaceHealth Southwest.

Healthcare workers at PeaceHealth agree with the All4Oregon hospitals, getting vaccinated is paramount to helping hospitals become too overwhelmed.

The last projection of the delta surge in Oregon showed that the peak would come in the beginning of September, and officials are saying that only if everyone acts now by getting vaccinated, wearing masks, limiting social gatherings and washing hands will the surge see some semblance of waning in October.