According to Albany police, when the stepparent of two girls arrived home around 4 a.m., she found a strange man in the girls' room sexually assaulting them. 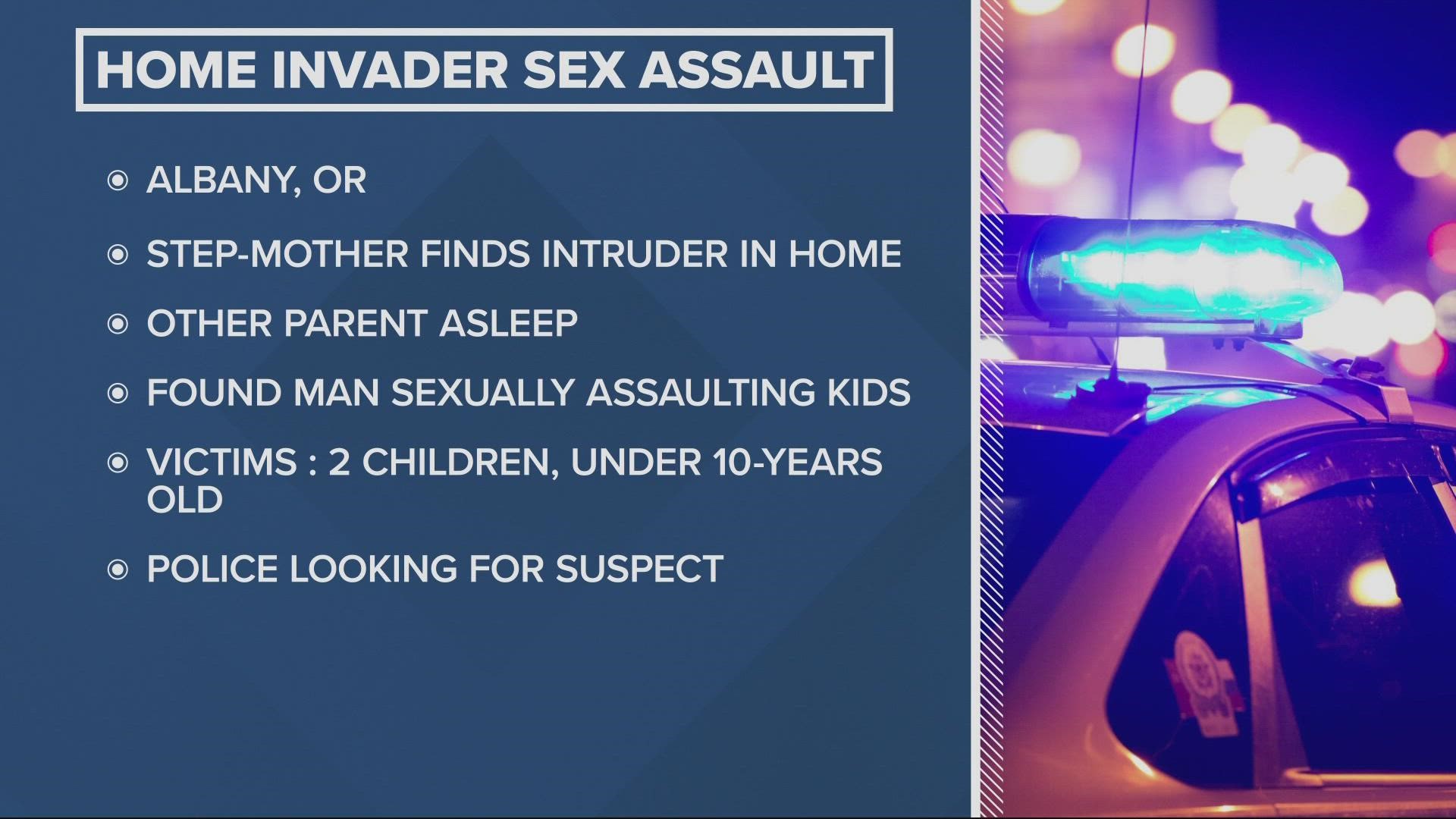 ALBANY, Ore. — Albany police are searching for a man who allegedly broke into someone's home and sexually assaulted the two children, both under 10, who were in the home.

The call came in just after 4 a.m. in the 3200 block of SE Jackson Street in Albany. The stepmother of the two children returned home after visiting someone. When she arrived home, she saw the door was open and some lights were on in the house. The other parent of the children was asleep in the home, according to police.

The stepmother said she heard noises coming from the girls' bedroom and went upstairs to find the suspect sexually assaulting the children. She said the man pushed past her and ran out of the home. The suspect is described to be a white man who is about 5'7" with short blonde hair in his late 20s or 30s. He was described to be wearing a blue shirt, black sweatpants-type pants. She did not recognize the man.

“These don’t happen very often, occasionally in the summers you get people who leave their windows open because of hot temperatures and someone will steal something or they will break in and leave but no real assaults, but they’re pretty rare," said Captain Brad Liles with the Albany police.

In fact, Liles reported that it has been seven years since Albany has seen a stranger break-in that resulted in violence; that case ended with a shooting.

Upon arriving on the scene, Liles said multiple off-duty personnel were called in to begin canvassing for the suspect.

“We just began searching the area for the described subject," Liles said. "Also brought in a K9 unit to try and see if we could track down the subject as well, which we weren't able to. We began a canvas, and that can be pretty large.”

Neighbors have also been contacted to inquire whether they had seen anything, heard anything or if they know anyone who matches the description of the suspect.

The girls were taken to the ABC House in Albany where they will receive an exam and will be interviewed.

Liles said the message in this case is one of home safety.

“It’s a repetitive message – whether you’re at home or whether you leave your home, lock your doors, lock your windows pay attention to your neighborhoods if you see suspicious people give the police a call," he said. "If someone is in an area it looks like they shouldn’t be in, creeping around residences late at night, definitely, give us a call. Be very vigilant. Obviously, we’re not trying to shock the community but we’re just wanting to accurately put it out there that we are investigating something of this nature, it doesn’t happen very often it’s just a good reminder to be vigilant in your own neighborhoods."