Officials said the location was chosen because the neighborhood is not supported with many existing resources and services. 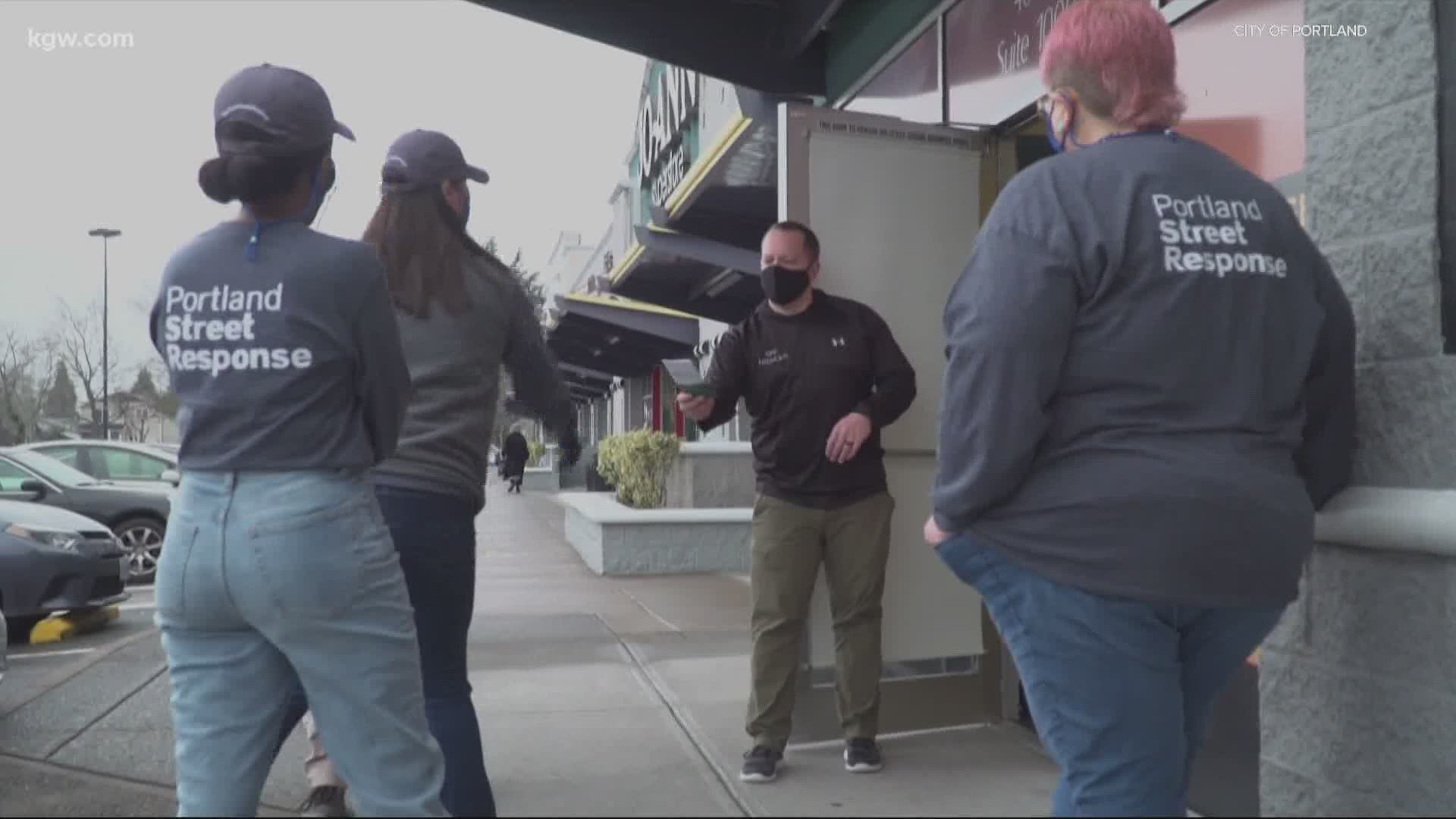 PORTLAND, Ore — After years of build-up, a non-police response to assist people in a behavioral or mental health crisis or experiencing homelessness officially launched in Portland Tuesday.

The program is based on a decades-old model in Eugene known as CAHOOTS. It’s is designed around dispatching city-funded teams of paramedics and crisis counselors to emergency calls that deal with a need for social services like housing, drug counseling, non-urgent medical attention.

“Having non-emergency personnel respond [to these calls] is a better utilization of our resources,” said Mayor Ted Wheeler at a press conference Tuesday afternoon.

"It's rare in modern times for a new branch of a public safety system to be created from scratch," Commissioner Jo Ann Hardesty said. "I couldn't be more excited to see this team in action and to learn from this pilot period about how to make this program the best it can be."

At that press conference, the Mayor and other city officials gave kudos to the Portland newspaper Street Roots for helping build support for PSR. In March of 2019, staff published an op-ed calling for a program like it.

“Honestly, last night I got a little teary thinking about it because, I mean, it's enormous,” Sand said. “It's an enormous shift of the imagination of the social imagination, and I think we're ready.”

Dan Douthit, a spokesman for Portland’s Bureau of Emergency Communications, said 911 operators will dispatch the team to calls where the person is “…outside and is possibly experiencing a mental health crisis; intoxicated and/or drug-affected. We ask if the person needing help appears to be violent or threatening violence. We also ask the caller if they have seen a weapon on or near the person.”

Complete with a price-tag of $4.8 million, much of which came from cuts to the Portland Police Bureau’s budget last year, PSR is still considered a pilot program and is only operating in the Southeast Portland’s Lents neighborhood.

Officials said the location was chosen because the neighborhood is not supported with many existing resources and services; additionally, the volume of mental and behavioral health calls in Lents is outpacing the growth of similar calls in other parts of the city.

In a statement released Wednesday, the Lents Neighborhood Association said the launch of PSR “…is especially important to provide a human solution for community members experiencing houselessness and/or a mental health crisis and to support all of our neighbors -- housed and unhoused.”

“Our neighborhood association has been acting like a liaison between the city and the program and the community at large,” said chair Sabina Urdes in an interview Wednesday. “We've been trying to keep the community informed of what's going on, engage them, and create opportunities for them to ask questions about the program and provide feedback. And I think going forward, we are committed to continuing having those conversations.”

According to a news release, for now, the team will be responding to calls Monday through Friday from 10 a.m. to 6 p.m. After six months, the release said, a second team will be added to take on nights and weekends.

The city hopes to expand the program to include more teams and additional locations around the city by 2022, but Commissioner Hardesty noted Tuesday officials aren’t sure how they’ll fund that expansion, which will cost more than the $4.8 million allotted from those cuts.

“Whether it's health care organization, whether it's Medicaid or Medicare at the national level … what we're looking at is, what would be the funding source to make this a citywide effort?” Hardesty said.

Hardesty added, the city's general fund is not an option. Thanks to lost revenue during the COVID-19 pandemic, Portland faces a massive deficit.

RELATED: Portland's mayor promises to tackle trash and graffiti but won't give specifics