Portland police are accused of being heavy-handed and reportedly injuring people who were protesting a rally by extreme-right demonstrators on Saturday. 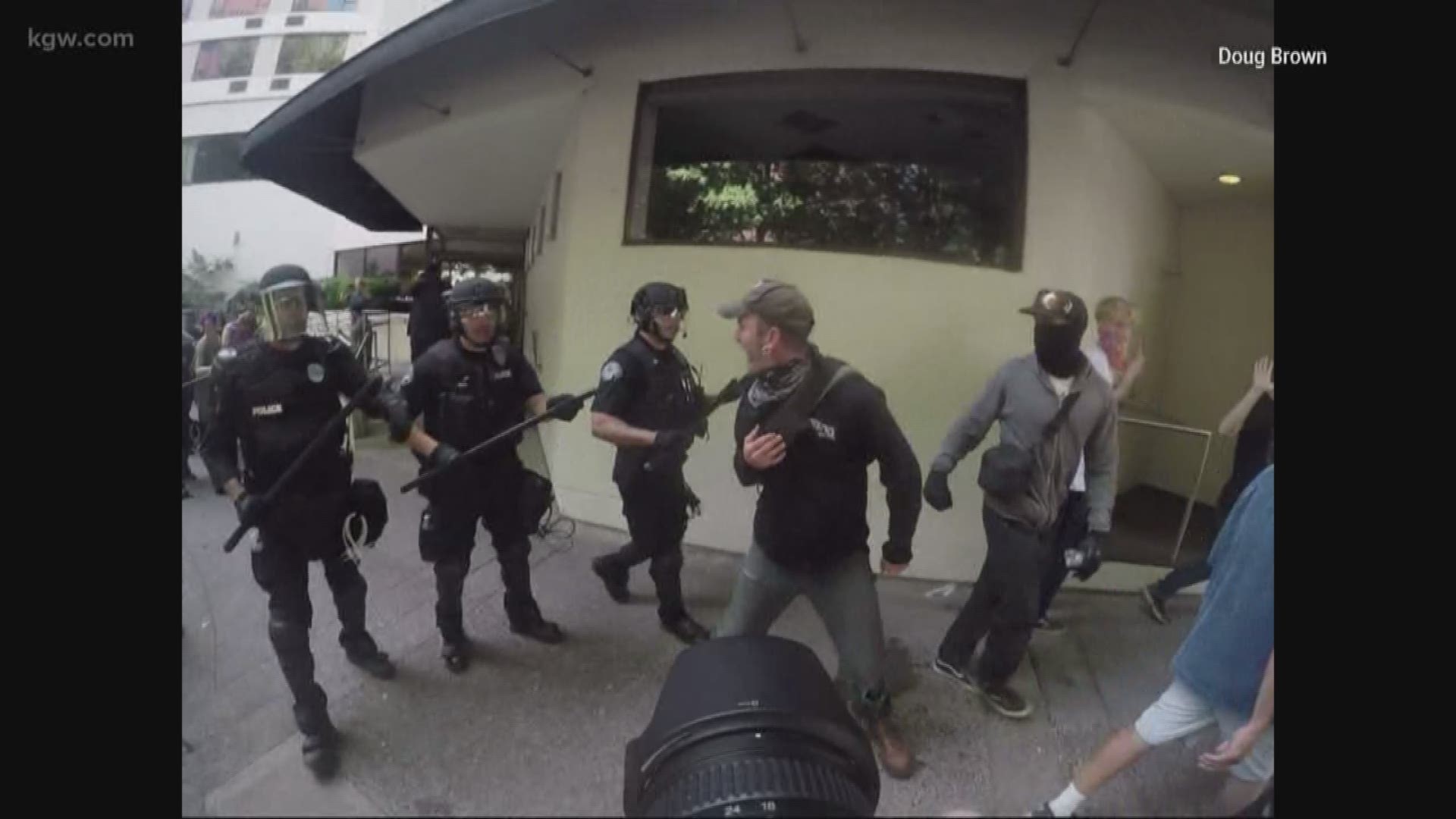 PORTLAND, Ore. — Police were accused Sunday of being heavy-handed against people protesting a Portland rally held by extreme-right demonstrators. Officers reportedly injured some counter-protesters, prompting the city's new police chief to order a review of officers' use of force.

Police in riot gear tried to keep apart the opposing groups, many of whom had arrived on Saturday dressed for battle, in helmets and protective clothing. Dozens of the extreme-right protesters were bussed to Portland, one of America's most liberal cities, from nearby Vancouver, Washington.

Saturday's clashes were the most recent of several this year in the city as right-wing militants converged, met by counter-protesters, including members of anti-fascist, or "antifa," groups. City officials have struggled with striking a balance between free speech and keeping events from spiraling out of control.

But on Saturday, some said police acted mostly against those protesting the presence of the extreme-right demonstrators, using stun grenades and what appeared to be rubber bullets against them.

Police "targeted Portland residents peacefully counter-protesting against racist far-right groups, including white supremacists, white nationalists, and neo-Nazi gangs," the Oregon chapter of the Council on American-Islamic Relations and the Portland chapter of the Democratic Socialists of America said in a statement. It called on officials to investigate.

Olivia Katbi Smith, the co-chair of the Portland Democratic Socialists of America, told KGW an investigation isn't enough. She called on the Portland Police Bureau to end use of force tactics at protests.

"It seems to keep getting worse, and I think someone is going to die," she said. "And their blood will be on the hands of Mayor Ted Wheeler and Chief Danielle Outlaw."

The head of the Oregon branch of the American Civil Liberties Union also criticized the way police handled the demonstrations.

"The Portland Police Bureau's response to protest is completely unacceptable in a free society," David Rogers said in a statement issued Sunday night. "The repeated use of excessive force, and the targeting of demonstrators based on political beliefs are a danger to the First Amendment rights of all people. We call on the Portland Police Bureau, Mayor Wheeler, and Chief Outlaw to immediately end the use of weapons, munitions, and explosives against protesters."

Police ordered the counter-protesters to disperse, then moved in behind a volley of stun grenades. The blasts echoed through downtown Portland.

One of the rounds reportedly hit a counter-protester in the head, becoming embedded in his helmet and injuring him. PPB is reviewing the incident and could not say whether or not the item lodged in the helmet came from police.

One woman was taken to a hospital after being hit in the arm and chest with a "flash-bang" grenade, local media reported.

A reporter for The Oregonian/OregonLive was bloodied when he was struck by a projectile. Eder Campuzano said later on Twitter he was "okay."

Video shot by Doug Brown, who was covering the protest for the ACLU, shows police in riot gear shoving him and others down the street. Brown said he was rushed by officers more than once.

In the video you can also hear repeated announcements being made over a loudspeaker telling protesters to clear the area and warning that failure to do so may result in arrest, citation or riot control tactics. The announcements also said officers observed protesters throwing items at officers. 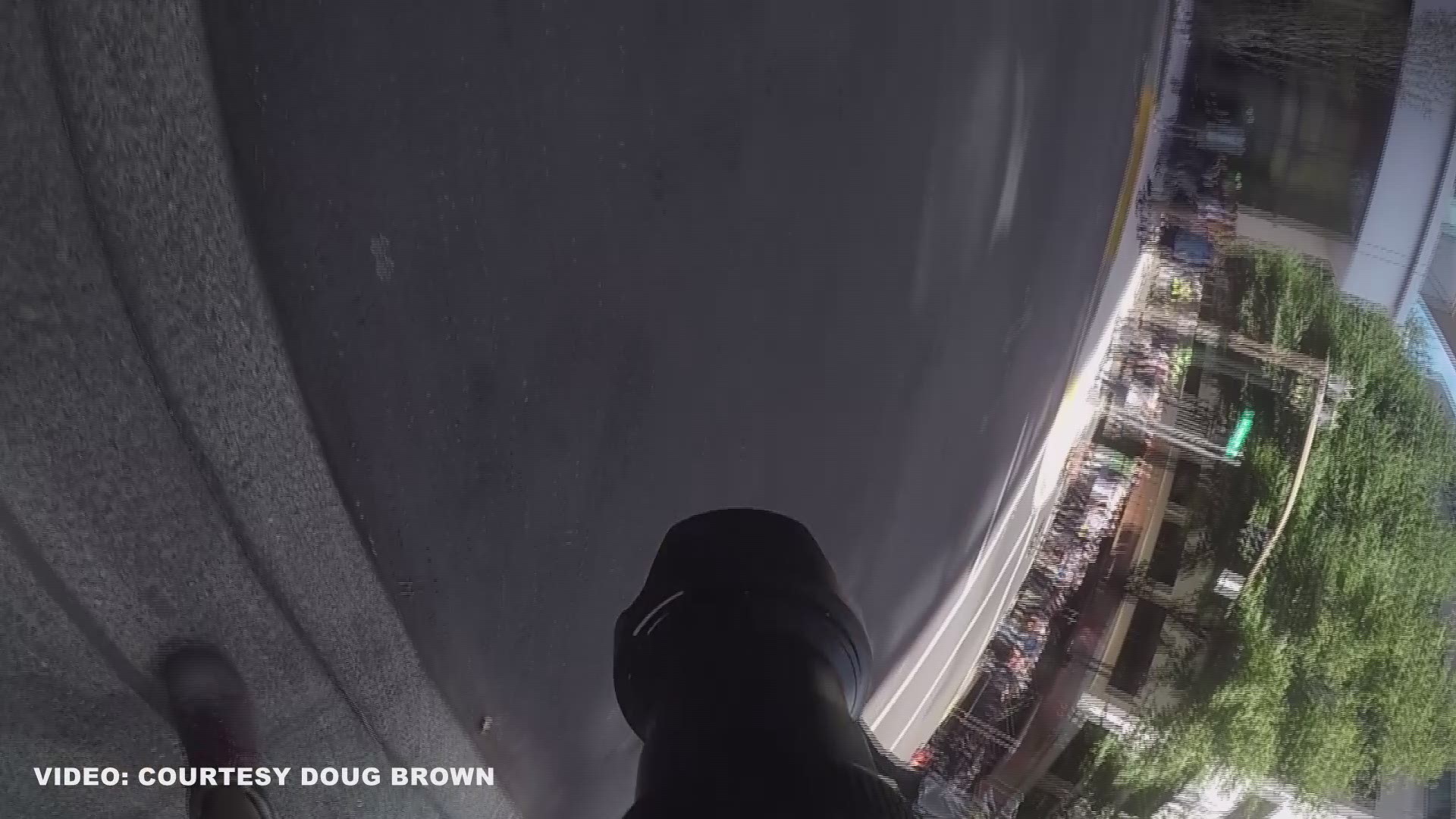 “People were throwing projectiles at law enforcement that included rocks, bricks, there was a report from officers that they were being, there was some type of unknown chemical agent that was being thrown on them that had a strong vinegar smell,” said Portland police Sgt. Chris Burley.

Chief Outlaw, who assumed command less than a year ago as Portland's first African-American female police chief, said in a statement Sunday she takes all use-of-force cases seriously.

Outlaw directed the professional standards division to begin gathering evidence to determine if the force used was within policy and training guidelines. The Office of Independent Police Review will be provided with the information for review and investigation.

1 / 47
Steve Dykes
Portland Police fire projectiles at counter protestors during an Alt Right Rally at Waterfront Park on Aug. 4, 2018. The rally was broken up after elements of the Antifa group allegedly threw items at police. (Photo by Steve Dykes/Getty Images)

Saturday's incidents started with demonstrators aligned with Patriot Prayer and an affiliated group, the Proud Boys, gathering in a riverfront park. The Proud Boys are characterized as a hate group by the Southern Poverty Law Center, which is "dedicated to fighting hate and bigotry and to seeking justice for the most vulnerable members of society."

Hundreds of counter-demonstrators faced them from across the street, holding banners and signs with messages such as "Alt right scum not welcome in Portland." Some chanted "Nazis go home."

Officers stood in the middle of a four-lane boulevard, essentially forming a wall to keep the two sides separated.

The counter-protesters were made up of a coalition of labor unions, immigrant rights advocates, democratic socialists and other groups.

Saturday's rally, organized by Patriot Prayer leader Joey Gibson, was the third to roil Portland this summer. Two previous events ended in bloody fistfights and riots and one counter-protester was sent to the hospital with a skull fracture.

This time, Gibson changed the venue from a federal plaza outside U.S. District Court (Terry Schrunk Plaza) to Waterfront Park so some of his Oregon supporters could carry concealed weapons as they demonstrated.

Gibson disputed the group's classification by some as a hate group.

"We're here to promote freedom and God. That's it," Gibson said. "Our country is getting soft."

Prior to the protest, police said in a statement that weapons may be seized if there is a violation of law and added that it is illegal in Portland to carry a loaded firearm in public unless a person has a valid Oregon concealed handgun license.

Among the things police ended up confiscating were long sticks and homemade shields.

Gibson's insistence on bringing his supporters repeatedly to this blue city has crystallized a debate about the limits of free speech in an era of stark political division. Patriot Prayer also has held rallies in many other cities around the U.S. West, including Berkeley, California, that have drawn violent reactions.

But the Portland events have taken on outsized significance after a Patriot Prayer sympathizer was charged with fatally stabbing two men who came to the defense of two young black women — one in a hijab — whom the attacker was accused of harassing on a light-rail train in May 2017.

Prior to Saturday's protests, a coalition of community organizations and a group representing more than 50 tribes warned of the potential for even greater violence than previous rallies if participants carry guns. It called on officials to denounce what it called "the racist and sexist violence of Patriot Prayer and Proud Boys" and protect the city.

Gibson, who is running a longshot campaign to unseat Democratic U.S. Sen. Maria Cantwell of Washington, said in a live video on Facebook last week that he won't stop bringing his followers to Portland until they can express their right-wing views without interference.

Self-described anti-fascists — or "antifa" — have been organizing anonymously online to confront Patriot Prayer and the Proud Boys in the streets.

Interview with a counter-protester from Denver

"Patriot Prayer is continuing to commit violence in our city, and their events are becoming more and more violent," said Effie Baum of Pop Mob, a coalition of community groups organizing the counter-demonstration. "Leaving them a small group to attack in the streets is only going to allow them to perpetuate their violence."

Dueling protests a month ago ended with Portland police declaring a riot and arresting four people. A similar Patriot Prayer event on June 4 devolved into fistfights and assaults by both sides as police struggled to keep the groups apart.