Three members of the Portland Police Bureau describe the violence they deal with at protests downtown, and the lack of resources to address gun violence elsewhere. 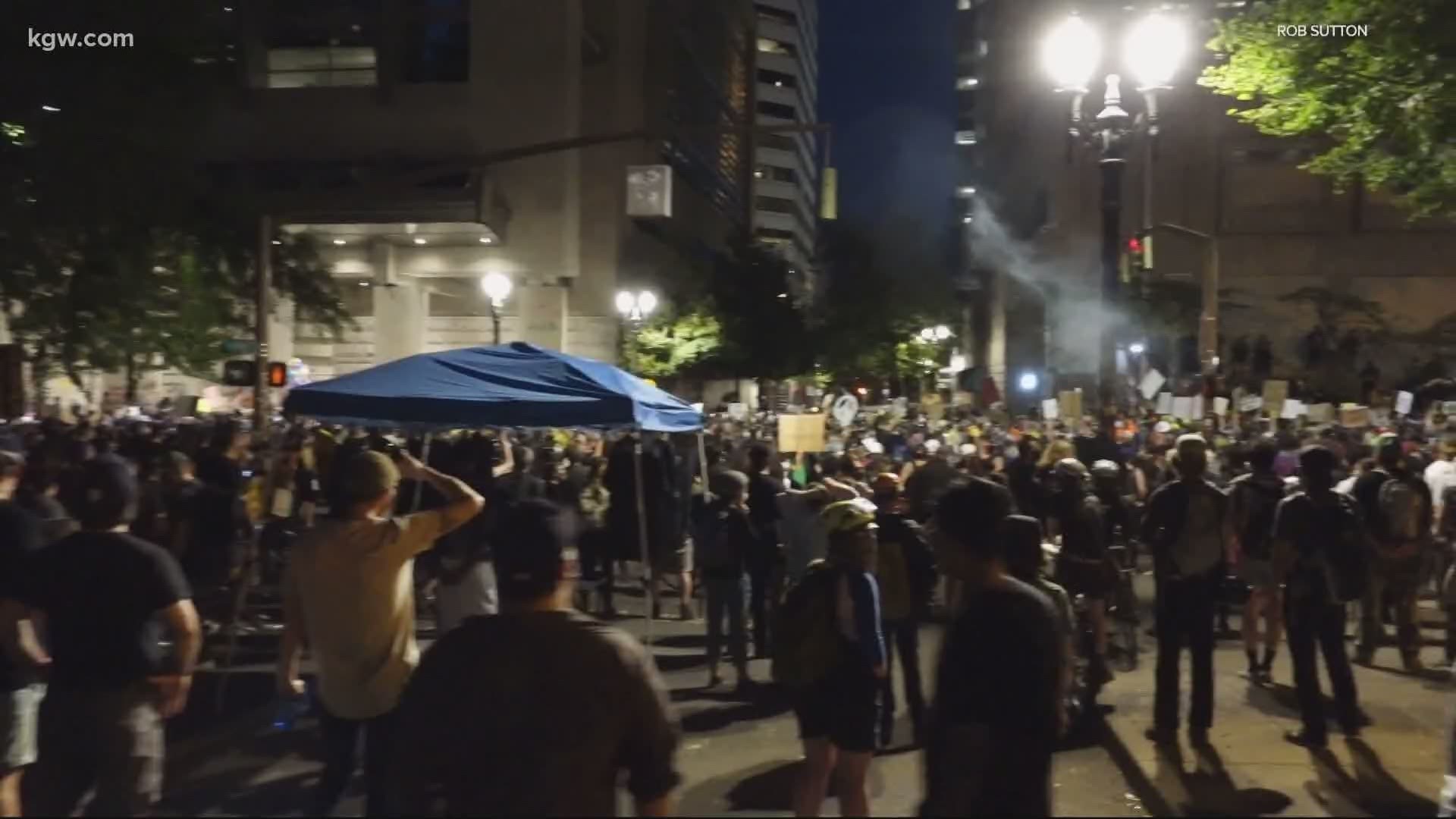 PORTLAND, Ore. — Three members of the Portland Police Bureau spoke to the media on Thursday afternoon to share personal experiences while working the front lines of Portland protests.

People have gathered each night in downtown Portland for the past 10 weeks to protest police brutality and systemic racism following the killing of George Floyd.

Sgt. Brent Maxey, Sgt. Derrick Foxworth and Officer Rehanna Kerridge spoke about that, and Kerridge also talked about funding being cut for the Gun Violence Reduction Team (GVRT), of which she was a member.

Kerridge said too many resources are redirected to the protests every night, including her position.

In the early weeks of the protests, during widespread calls for defunding the police, Portland City Council announced that the GVRT would be disbanded. Kerridge said that news was devastating for her, and that it was a step in the wrong direction.

She said sentiments against the GVRT, including that it was racist, were just not true.

RELATED: 'Enough is enough' | Police chief says Portlanders are tired of violence, at protests and elsewhere

"It was a sacrifice to work in that unit," she said. Upon learning funding was cut: "insulting was the first word that comes to mind. I had to find out about that by watching a press conference."

She said she had spent years in North Precinct as part of that team, building relationships with neighbors, businesses, victims and colleagues. Now she's been reassigned to Central Precinct, "where people are actively trying to destroy and create division" night after night.

Foxworth joined the police bureau in 2003, a month before his father was named police chief.

"It's interesting be an African American officer, and I think it's a shared experience," Foxworth said. "When you step outside or your agency, when you wear the uniform in public, especially if you're interacting with communities of color, it doesn't always go well. There's a common experience that you're no longer Black, you're blue."

Foxworth said he hasn't experienced any racism within the Portland Police Bureau.

"The men and women of the Portland Police Bureau are some of the most accepting and kind people that I've ever interacted with," he said.

He said the bureau should always be focused on how to become more diverse and inclusive, but he agrees with Kerridge that disbanding the GVRT was a step in the wrong direction. He said the escalating violence outside of downtown Portland cannot be addressed if officers are focused on nightly riots, and stopping gun violence requires the kind of community relationship the GVRT had.

Sgt. Maxey has been with the bureau for 18 years. He agreed that way too many resources over the last two months have been dedicated to violent riots, and he added that officers have been subjected to "some of the most horrific displays of hate" that he's ever seen during the ongoing protests.

Specifically he referenced a protest outside of Portland Police Association, where 4,500 people showed up and many in the crowd turned their attention to two female officers.

"The crowd keyed in on them, saying some of the most vile things to them, talking about sex assault, about being sex objects for other officers," Maxey said. "There was one individual that said that he was going to take the baton from one of the female officers and sexually abuse her with it. It was something that is so vile, no one should be exposed to it.

"It does take some type of psychological toll to sit there and listen to this hate for no other reason than we're police officers. I would say it's down there in one of the lowest nights in my career. I think more of those people that are showing support, need to stand up and speak out against it. I really think that's how we're going to get through this."

Portland's protests and rallies have mostly been peaceful, with thousands of people gathering in downtown Portland to chant, listen to speakers and call for change.

Portland Police Chief Chuck Lovell met with the media Wednesday and said the violence downtown needs to stop. He called on Portlanders to speak out.