The MacLean brothers want to help clean up the downtown parks near where nightly protests and riots have been happening. 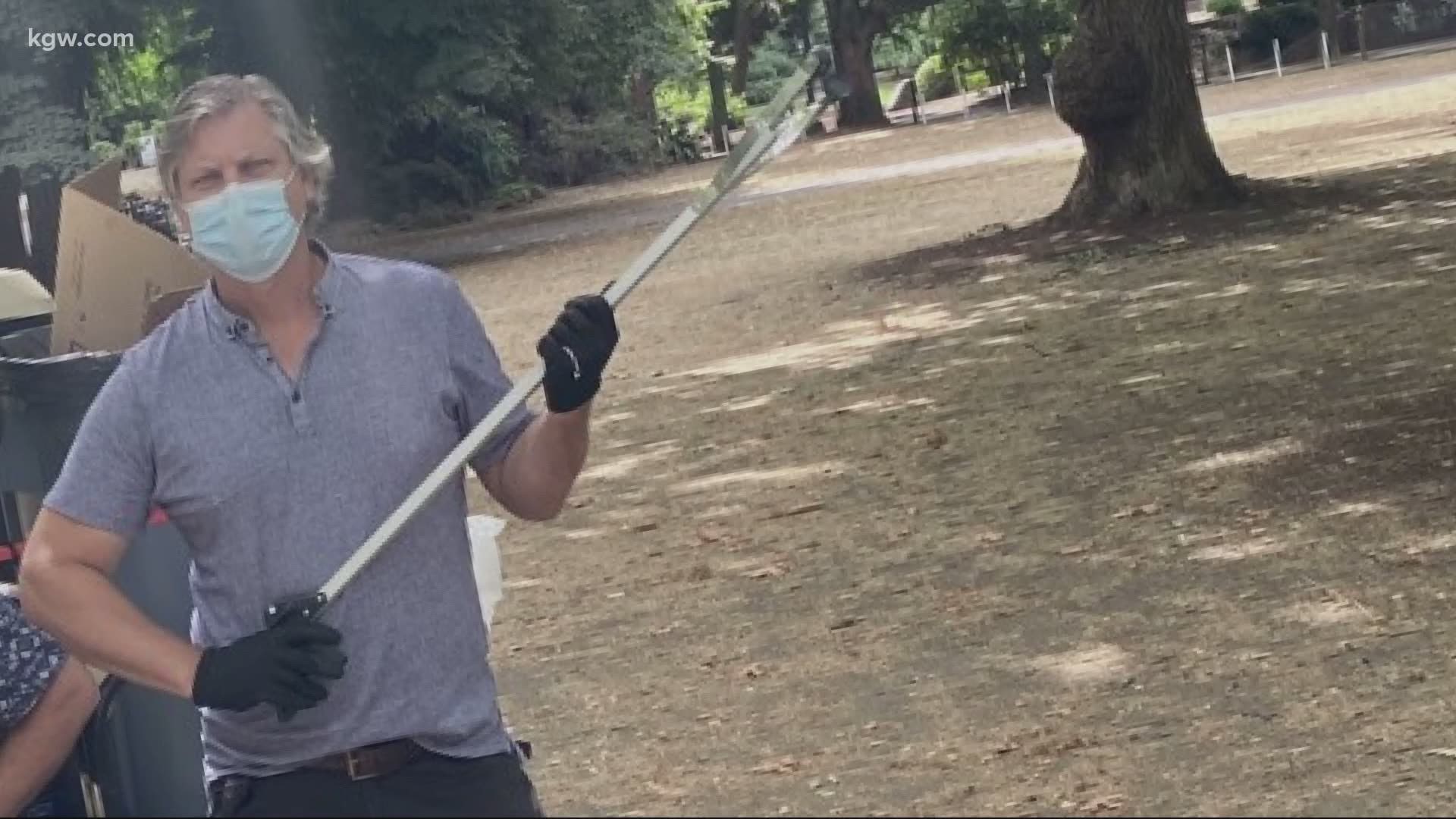 PORTLAND, Ore. — It's safe to say the MacLean brothers do pretty much everything together. Alex, Colin and Scott were born and raised in the Rose City and have worked downtown for about the last 35 years.

"We went to high school together, we went to college together, we get together regularly for lunch in downtown and we hang out with each other on the weekend," Alex MacLean, the oldest brother said.

While on a lunch break, Scott MacLean, the youngest of the three, noticed the trash in and around Lownsdale and Chapman Squares in downtown Portland. So he grabbed some garbage bags and picked up what he could.

"It was everything from food wrappers to beer cans and plastic bottles and different things like that," Scott said. "I got a pretty good start on it and I couldn't get it all."

He called his two brothers to help the next day. Colin attached two garbage cans to the back of his golf cart and Colin, Scott and Alex helped clean up trash in the two parks and around the former Elk statue.

In the last week, they took around 500 pounds of trash to the dump.

"You see the city that you grew up in," Colin said. "The city your family grew up in, being somewhat neglected and regardless of your political persuasion we can make a difference and clean it up."

So who picks up litter in Portland?

It depends on where it lies. For instance, at Chapman and Lownsdale Squares, the city works with Central City Concern's Clean Start Program. A spokesperson for the Parks and Recreation department wrote to KGW, "Clean Start visit the parks every morning and PP&R staff work hard to address any damage to park infrastructure and other public property, empty garbage cans, and to respond to other maintenance needs. These workers are equipped with appropriate personal protective equipment and training to safely collect and dispose of debris."

Outside the parks, cleanup is done by Downtown Portland Clean and Safe, which over the last few months has picked up more trash downtown during the same time frame as last year.

"Between March and July this year, under COVID-19 closures, our teams cleaned more than 92,870 bags of trash, biohazards, needles and graffiti. A 12% increase from last summer during the same timeframe," a statement from Maureen Fisher, the Executive Director or Downtown Portland Clean and Safe writes.

Downtown has changed in the last 5 to 6 months since the pandemic shut down businesses and forced companies to work from home. Take a drive through the downtown core and you'll find businesses boarded up after riots and protests first started almost three months ago.

Some businesses have closed altogether.

RELATED: 'Is it even worth it?' Restaurant owner says reopening a popular brunch spot during a pandemic is challenging

In a statement sent to KGW, Andrew Hoan, President and CEO of The Portland Business Alliance was critical of the city's cleanup efforts and government response.

"We're just not seeing the action we need from our elected leaders at all levels of government," said Hoan in the statement. "Commitments were made several weeks ago and there's been a failure to fully act on that plan and put in action long-term commitments such as toilets and cleaning stations for those in need and proactive graffiti cleanup and repairs after each night of damage."

The typical energy and vibrance of a major city isn't there anymore, night life replaced with nightly protests and sometimes riots.

The MacLean Brothers aren't making any statements by what they are doing, other than picking up the trash on the streets and parks of a city they grew up in.

"For us, it's more of what can we do on a very small scale that's not political to try and improve the reputation of Portland, and this was an easy one," Colin said.

Alex said his message is simple: "We're out doing this for no other reason than we're taking care of our own backyard."

RELATED: One man's mission to clean up the Potomac River on paddleboard