Police dispersed a crowd after they said some people threw bottles at officers. Later, a group of protesters marched through downtown. 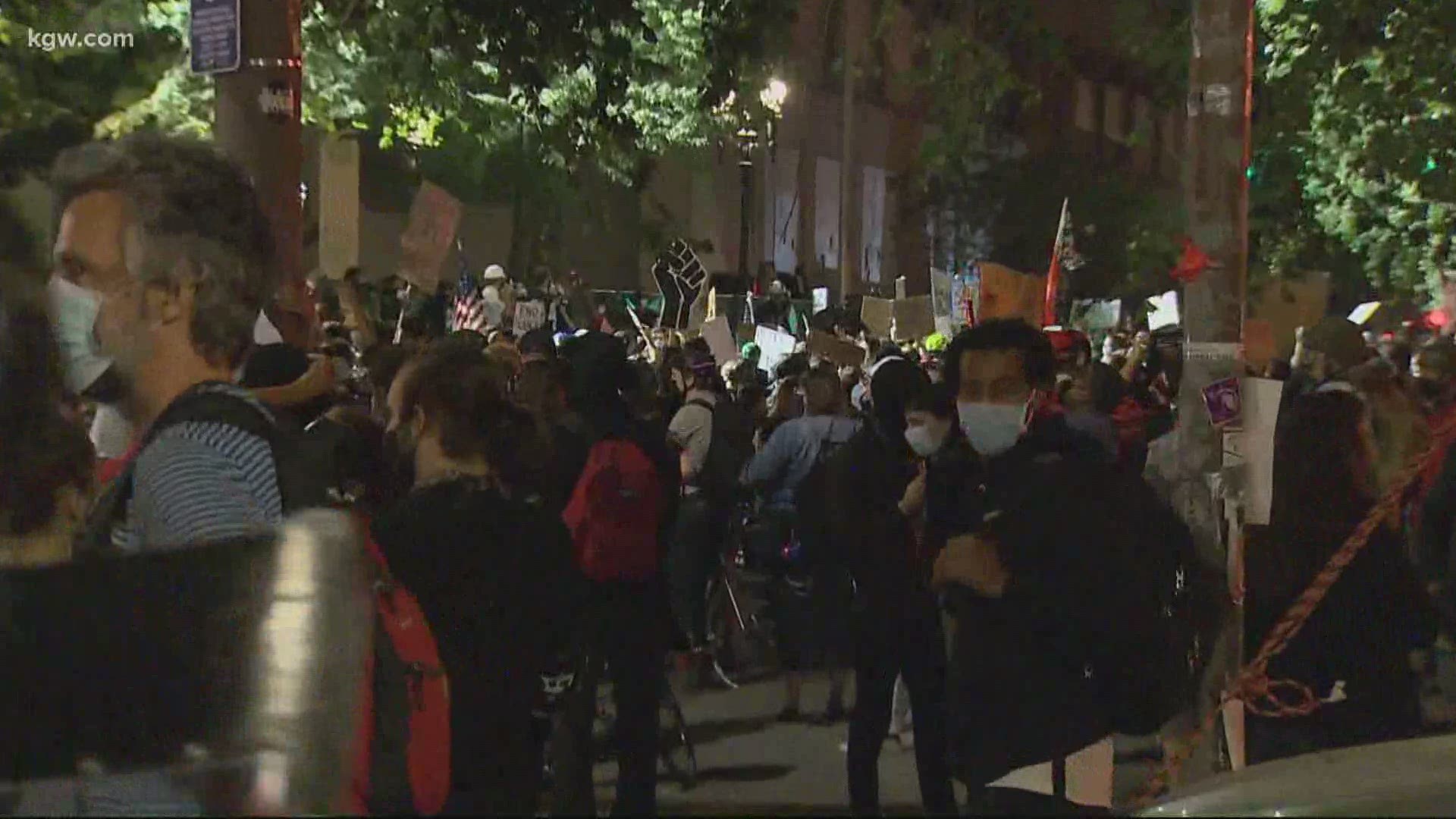 PORTLAND, Ore. — A crowd marched through the streets of downtown Portland Saturday night and early Sunday morning, marking the third consecutive night of protests that ended in a relatively peaceful manner as federal agents pulled back and made their presence less visible.

Earlier in the evening, the Portland Police Bureau announced an unlawful assembly in the 4700 block of East Burnside Street, alleging that some protesters had thrown glass bottles at officers and directed lasers at them.

People in this unlawful assembly have thrown glass bottles at Portland Police and directed lasers at them. Anyone who does not disperse may be subject to force or arrest.

Video shared by a journalist showed officers dispersing the crowd and pushing them back as they chanted "why are you in riot gear, I don't see no riot here?"

One journalist at the scene did say he saw someone being treated for pepper spray. In a news release distributed early Sunday morning, Portland Police denied the use of CS gas.

Someone near me is being treated for cop mace. I think cops are leaving this area. Press and medics are far easier to identify here than cops. pic.twitter.com/ahBdbegXdp

Another reporter tweeted video of officers rushing the crowd.

Police said two people were arrested following this incident. They were identified as:

- Max Van Briesen, 31, of Portland, who faces charges for assaulting a public safety officer, interfering with a police officer and disorderly conduct in the second degree.

- Freedom Moreno, 34, of Portland, who faces charges for interfering with a police officer, disorderly conduct in the second degree, resisting arrest and harassment.

Police alleged in the release that people with "press" written on their outer garments "repeatedly threw objects at officers."

The release says one officer was hit in the head with a "glass bottle or can full of paint." That officer was not injured, according to police.

In addition, the news release says that near Burnside and Southeast 44th Avenue, someone moved a car in front of police, "interfering with their attempts to safely move people out of the road."

"To remove the hazard the car presented, Portland Police deflated its tires and passed it by," the release says. "Upon reaching Southeast 41st Avenue and Southeast Pine Street, Portland Police disengaged and returned to the Penumbra Kelly Building."

This happened as another crowd gathered around the Multnomah County Justice Center downtown, something that has happened for 65 consecutive nights following the death of George Floyd while in custody of Minneapolis Police.

It’s quiet at the justice center and US courthouse at 7pm. A few dozen people gathering. Several unions are calling on members to form a “solidarity wall” here later, much like the “wall of moms.” They’re expected to march over around 10pm. @KGWNews pic.twitter.com/DtoTujJ9XW

KING5's Ted Land witnessed some demonstrators yelling at law enforcement before they entered the Justice Center. After this incident, no additional members of law enforcement were visible on the streets.

A few people were yelling at Multnomah Co. Sheriff’s Office deputies who were gathered on a corner and just went inside the justice center. No more law enforcement visible on the streets. pic.twitter.com/6gOzhcdxrJ

As the night continued, the crowd watched a multimedia display showing the faces of people -- like George Floyd and Breonna Taylor -- who died after interactions with police.

On Friday, protesters said now that federal agents have pulled back, their hope is for their message to return to eradicating systemic racism.

A multimedia display is projected on the side of the federal courthouse, showing #GeorgeFloyd #BreonnaTaylor and many others. Crowd here has grown by hundreds in the last hour. @KGWNews pic.twitter.com/sUSMjh8IbG

Just after midnight, the crowd began marching through the streets, pausing to hear stories over the megaphone of racism and police violence. A live feed from NBC showed the group chanting "no justice, no peace" and "out of your homes and into the streets."

By around 2:30 a.m., the crowd had largely dispersed, with some subdued stragglers remaining near the federal courthouse.

After marching for nearly two hours, the crowd returned to the federal courthouse. It's a pretty subdued scene here for the third night in a row. I'm heading out. pic.twitter.com/7VxitN4NSz

Photos did show police putting out a small fire near the courthouse. At this point, it's unclear who was responsible for it.

Another march took place earlier in the afternoon.

On Saturday at 2 p.m. hundreds of people gathered at King Elementary School for a march put on by #WeGoneBeAlright. They marched to Peninsula Park where they demonstrated peacefully.

After a 1.3 mile march from King elementary, hundreds of peaceful protesters have now arrived at Peninsula Park. pic.twitter.com/SchVGoS7mV

The graphic circulating social media to promote the march encouraged protesters to practice social distancing and asks that people wear their masks. The march is to bring awareness to the need for justice system reform and equity in education.

Hundreds have so far gathered at King elementary for a peaceful march to Peninsula park to bring awareness to the need for justice system reform and equity in education. pic.twitter.com/pyKbspjWuR