Who is flying circles over Portland protests? 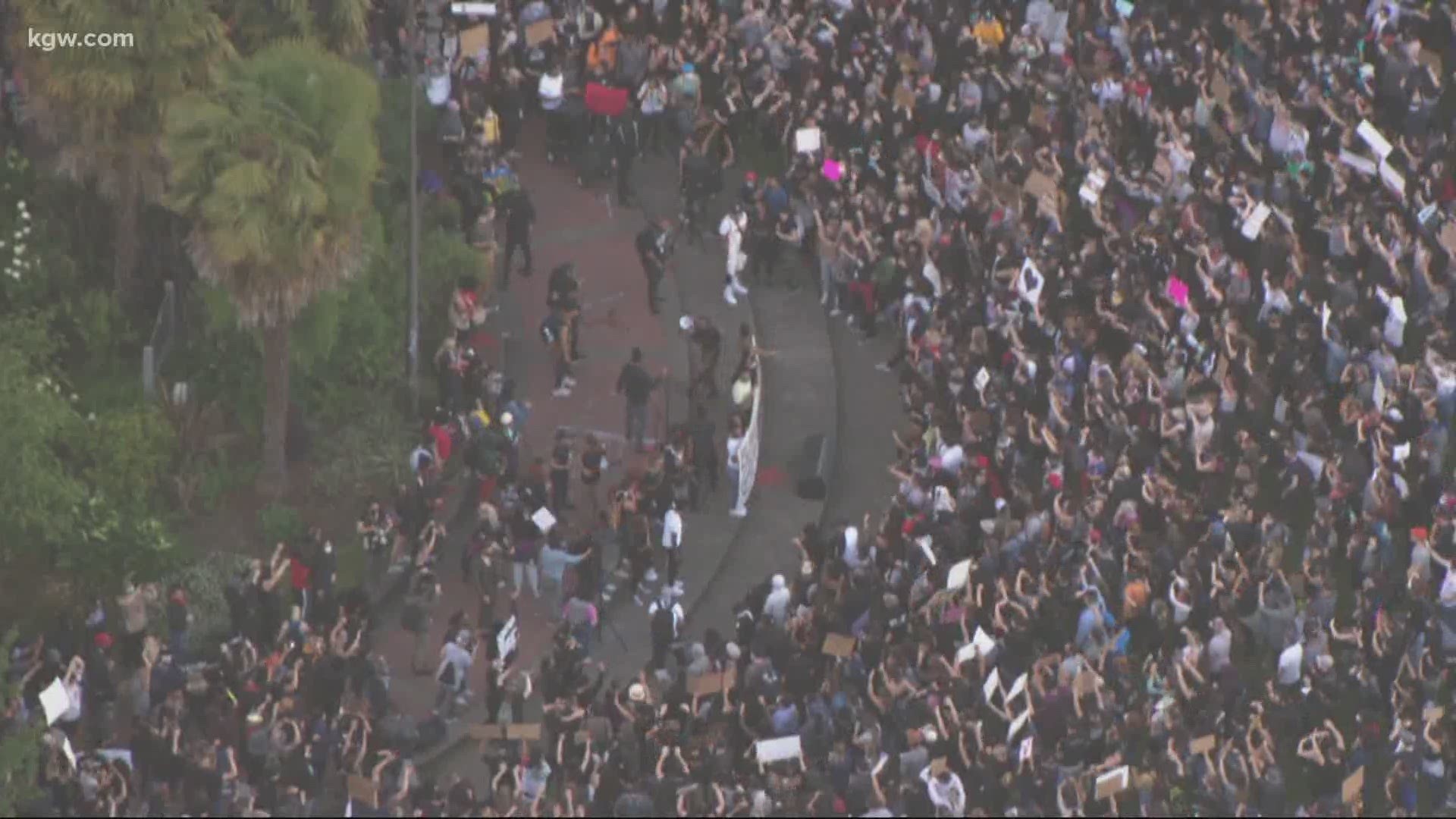 PORTLAND, Ore. — As hundreds of protesters marched peacefully along Sandy Boulevard in Northeast Portland, a small airplane buzzed overhead. The Cessna Skyhawk couldn’t be identified by demonstrators on the ground. It was too high, flying at roughly 3,400 feet.

Flight records show the aircraft operated by the Portland Police Bureau took off from PDX at 7 p.m. on Thursday. The airplane spent five hours and 43 minutes flying wide, counterclockwise circles over demonstrators. The plane landed at PDX at 1:48 a.m.

Using publicly available flight data, KGW found since large demonstrations began in Portland, police have spent more than 65 hours flying surveillance. The aircraft has circled the sky every night since May 28, except for one.

On most nights, the police airplane took off around 7 p.m., had a short break (presumably for refueling) and then landed in the early morning hours, often after 2 a.m.

“This type of activity is really troubling,” said Jake Laperruque, senior council with the Project on Government Oversight, a government watchdog group. “If surveillance is used to identify protesters and catalog them, it can be used to target protesters to direct retaliations and selective prosecution.”

The Portland Police Bureau’s use of a fixed-wing aircraft is no secret. The Air Support Unit has been around since 1990 and helped locate suspects, find missing children and evaluate large disasters.

City policy explains the aircraft may be deployed to provide patrol support, surveillance, enforcement and training. Additionally, city policy states the aircraft can be used for “surveillance of identified problem locations or people” and “crow control, protest marches and demonstrations.”

Portland police was not available for comment on recent use of the aircraft or what equipment has been utilized during surveillance of protesters.

“A lot of it comes down to the aircraft itself, but also what types of cameras are equipped on the aircraft and most importantly how that footage is being used,” said Laperruque, who believes police should be clear to explain what images are being captured, how the images are being stored and for how long.

The government’s use of surveillance planes to watch over people protesting the police killing of George Floyd has attracted the attention of nearly three dozen Democrats in Congress, including Oregon Representatives Earl Blumenauer and Peter DeFazio.

In a June 9 letter to the heads of Drug Enforcement Administration, Customs and Border Protection and the National Guard, lawmakers demanded federal agencies stop the practice after government aircrafts were found flying over protests in Washington, Minneapolis and Las Vegas.

“We demand that you cease any and all surveilling of Americans engaged in peaceful protests,” said the letter, which did not mention local police.

Various news agencies, including KGW have also flown over protests in Portland using a helicopter. KGW does not share aerial footage or a live feed with law enforcement. The helicopter, operated with two other television stations, is considered a safe way to document crowd size and movement.

Portland police has stated on social media that one person was caught flying a drone over protests. Portland police said it is not using any drones during the protest.

Government watchdogs complain the use of aircraft above protests is a breach of Americans' First and Fourth Amendment rights.

“The notion of using powerful surveillance tools on protesters is dangerous both because it creates opportunity for abuse and because, even absent misconduct, it could chill free expression, especially given the retaliation against protesters we've been seeing throughout the country,” said Laperruque.