The night Donald Trump was elected, the future of millions of residents nationwide was called into question. In Oregon, an estimated 130,000 people living in the state without proper authorization likely wondered what would happen next.

Trump called for the deportation of 11 million undocumented immigrants during his presidential campaign. He recently pivoted and said two to three million people would immediately be deported, which is how many were deported during Obama’s tenure.

The uncertainty of what Trump will do once he take office prompted hundreds of cities across the country to announce or re-affirm their status as sanctuary cities.

Sanctuary cities, however, may not provide the protection the word “sanctuary” suggests.

A sanctuary city does not mean the community has become a refuge for people who are not living there legally. It does not provide more homes for people, nor does it guarantee shelter. And some cities, like Portland, have declared themselves sanctuary cities without enacting any laws to back up that claim.

Still, for leaders to assert their city a sanctuary is a politically risky maneuver as Trump and his pick for Attorney General, Jeff Sessions, have threatened to cut federal funding to sanctuary cities.

So what does a “sanctuary city” mean? 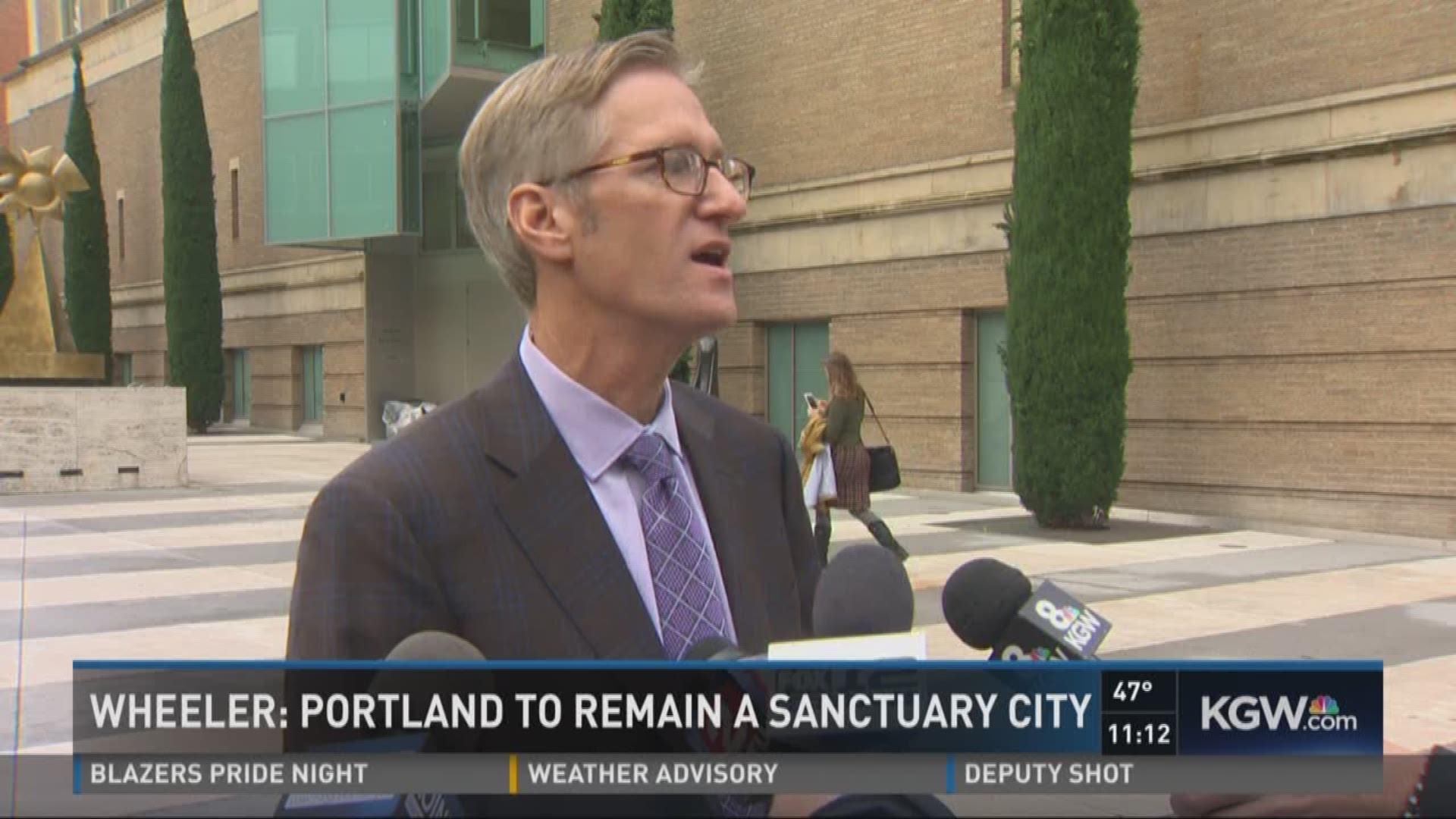 There is no hard-and-fast definition and each sanctuary city is different. In Portland, it mainly means that local law enforcement has been asked not to work with U.S. Immigration and Customs Enforcement (ICE) to help deport undocumented immigrants.

“ICE would like local jails to hold folks who have immigration violations for an additional 48 hours, so ICE can process them,” said Michael Cox, spokesman for Portland’s mayor-elect Ted Wheeler. “Many cities feel like those actions impair their ability to police their own city.”

The ICE request has been criticized because it may make people less likely to report crimes.

But there are no laws that prohibit the city from at any point changing its mind.

That doesn’t sit well with many in Portland. On Nov. 21, hundreds of people, led by a group called Latino Milenios (translation: millennials), demonstrated in front of city hall and demanding legal action to back up the city’s sanctuary declaration.

“We’re in a very difficult moment here. There are Latino families that don’t even want to take their children to school,” said Francisco Lopez, political director for the immigrant-rights group Voz Hispana Cambio Comunitario. He says he’s received more than a dozen phone calls daily since the election from people worried about deportation.

Hate crimes have also increased nationwide, and Oregon has landed at the top of the list. Many crimes are targeted at immigrants and people of color.

Lopez and others want Portland to implement a bevy of protections, similar to other sanctuary cities such as San Francisco, which has dedicated millions to its immigrant protection efforts.

San Francisco has been criticized for being over-protective. President-elect Trump blasted the city after a woman was shot to death by a Mexican man with a criminal record who had been deported several times.

Most undocumented immigrants in the U.S. do not have criminal records. Two-thirds have lived in the country for more than a decade and 70 percent contribute to the workforce.

Lopez says many are part of families that include U.S. citizens and legal action is a necessary step to protect people in Trump’s America, which he calls “a very different world.”

Voz Hispana and Latino Milenios want Portland to provide legal services to immigrants who have been victims of racism or face deportation, formally declare the city will not cooperate with ICE or allow raids of immigrant families, lobby the state to create safeguards to protect immigrants, and launch a campaign against hate crimes.

“These laws will not prevent things from getting worse,” Lopez said. “We are talking about being prepared to protect and defend our undocumented immigrant families.”

He likens the idea to a Martin Luther King, Jr. quote: "It may be true that the law cannot make a man love me, but it can keep him from lynching me."

Mayor-elect Ted Wheeler’s office said he will consider the requests once he takes office.

“The phase we’re in now is analyzing the legal framework that exists and determining whether it’s adequate given the incoming administration,” said Wheeler’s spokesman, Michael Cox.

Wheeler’s office is adamant that protecting Portland's immigrants is paramount, even if that means losing federal funding.

“Our values as a community, when it comes to being a place that is safe and welcoming for all people, are more important than the federal funding that would be attached to violating them,” Cox said.

Portland received $48.9 million in federal grants last year. It’s unclear how much Trump would drain from sanctuary cities as punishment for not working with federal immigration officials.

“It’s unknown what that federal funding would be,” Cox said. “We don’t know what he’s talking about withholding. The president-elect has made many commitments during the campaign, some of which he’s backed off of already. It’s hard to say.”

Lopez says the uncertainty of what a Trump administration could do is all the more reason for Portland to act.

“We don’t know what’s going to happen. There are people who are afraid of being on the streets,” he said. “These human beings are part of the socioeconomic fabric of our community and we need to do something about it.”