What happens when college students are arrested for off-campus, criminal behavior? 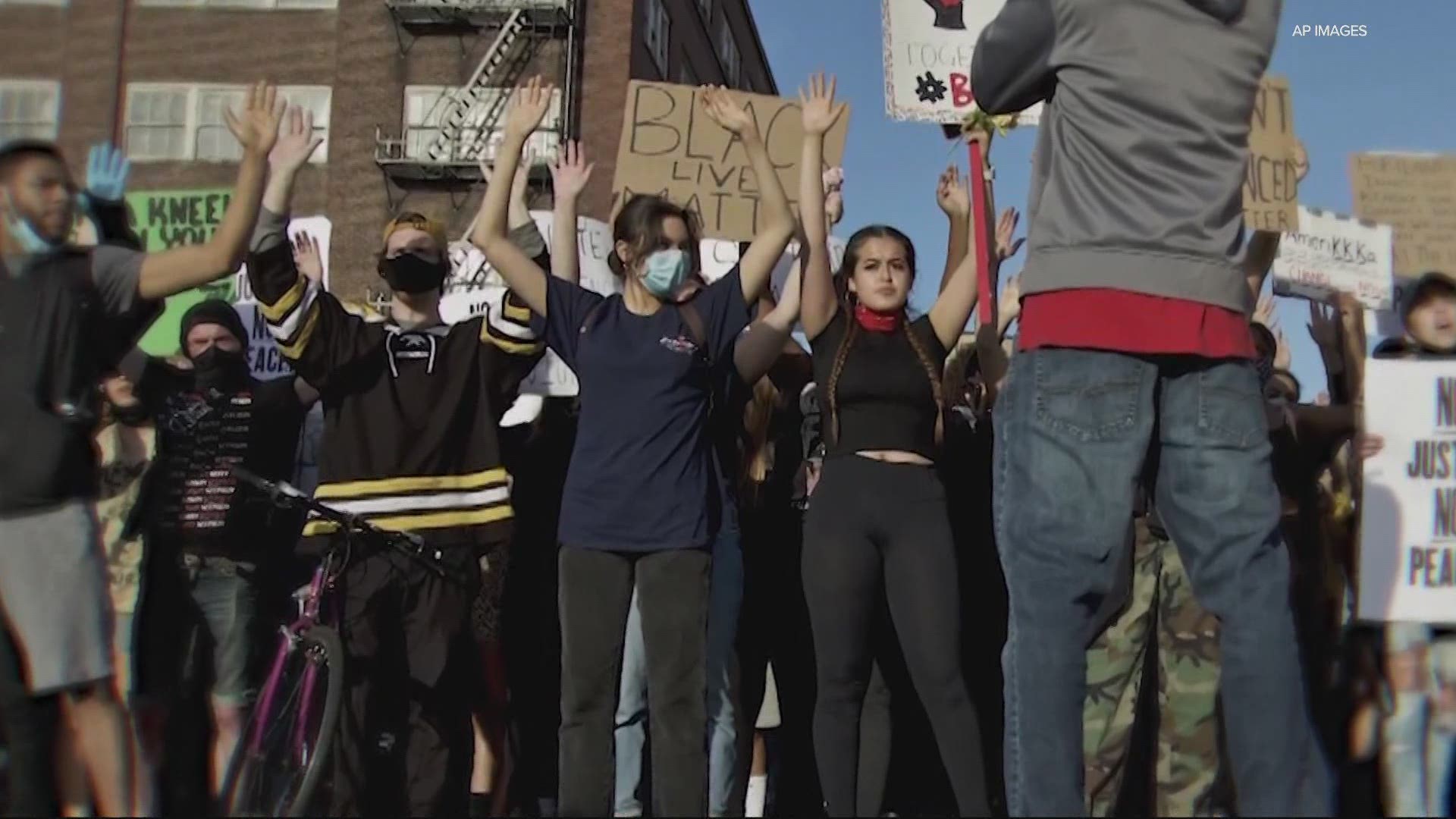 PORTLAND, Ore. — Over the past year, hundreds of people have been arrested for alleged violence at protests and riots in Portland. Some of those people currently face felony charges, including at least three local college students.

But how do universities respond when their own students are arrested?

A KGW Investigation found local universities vary in their handling of arrested students, some taking swift disciplinary action, while others wait for criminal trials to play out.

In March, Matthew Klein and his brother Jonathanpeter Klein were arrested by federal agents for their alleged involvement in the Jan. 6 riot at the U.S. Capitol.

At the time, Matthew Klein was a senior at George Fox University. In an email sent to KGW, a spokesperson for the private Christian college in Newberg said Klein "has been dismissed [from the university] and is barred from campus."

It's unclear what sort of internal investigation Klein faced prior to his dismissal. The university could not comment further due to "legal and privacy considerations" but said "student discipline is dealt with on a case-by-case basis."

Both Klein brothers now face multiple federal charges ranging from conspiracy to destruction of government property. Both have pleaded not guilty.

Disciplinary proceedings at universities operate differently than a criminal trial. Colleges take disciplinary action according to their established community guidelines, often known as student codes of conduct — rules that students agree to when they attend the school.

Those rules vary from campus to campus and depend on a number of factors. Public universities must set rules and procedures in accordance with the Constitution but private colleges can have much wider guidelines established by state laws.

WATCH: What happens when college students are arrested for off-campus, criminal behavior?

Student codes of conduct can apply to some off-campus behavior. According to the University of Oregon's student conduct code:

"The University may apply the Student Conduct Code to Students whose off-campus behavior has a significant adverse impact on the University community, its members, and/or the pursuit of its mission and educational objectives.

Deciding when to pursue a student conduct investigation is usually up to the university.

Just last month 19-year-old Alma Raven-Guido, a student at the University of Oregon, was arrested for allegedly setting fire to the Portland police union building. She now faces a federal arson charge and up to 20 years in jail if convicted. Raven-Guido has pleaded not guilty.

A spokesperson for the University of Oregon confirmed Raven-Guido is still enrolled but due to privacy laws, the university said it "does not share information about a student's conduct status."

A legal expert we spoke to said universities can take disciplinary action prior to a criminal conviction but only in some circumstances.

"When dealing with potential felony behavior a school probably can suspend a student while charges are pending if they believe there is a credible threat to the safety of the campus environment,” said Joe Cohn, the legal and policy director for the Foundation for Individual Rights in Education (FIRE).

FIRE is a nonprofit that advocates for individual rights on college campuses.

In situations where criminal charges are dropped, Cohn says universities should not continue to pursue disciplinary action if the conduct occurred entirely off-campus and no federal jurisdiction applies.

Despite the legal grey area, some local schools said they wait until criminal trials have concluded before their disciplinary process begins.

22-year-old Theodore Mathee-O'Brien is a student at Reed College, according to police documents. Since last July, Mathee-O'Brien has been arrested on at least four separate occasions.

Mathee-O'Brien now faces numerous criminal charges stemming from protest related violence, including an April 16 incident where police say he smashed the windows of numerous buildings, including those of the Oregon Historical Society.

In a press conference addressing ongoing vandalism in Portland last month, Mayor Ted Wheeler alluded to Mathee-O'Brien's case and called on the student to be expelled if he is found guilty.

“I noted for example that one of the individuals arrested is a student at one of the nation’s most expensive, elite, private universities that happens to be located in our community. If that individual is convicted, I hope he’s expelled,” said Mayor Wheeler.

KGW reached out to Reed College to see if any disciplinary action had been taken by the university. A spokesperson for the school said it "cannot comment on the conduct of individual students" and that the "college's adjudication process would only begin after a court case is resolved."

The school went on to say: "Reed condemns vandalism in Portland and joins other civic leaders, including members of the Black Lives Matter movement, in speaking up against wanton property destruction."

Cohn says it's not uncommon for universities to wait until a criminal trial has concluded before conducting their own internal investigation. In fact, it may be in the student's best interest. That's because statements made by students during campus investigations could be admissible in a criminal trial.

"So even though a dean can't sentence a student for time behind bars, if [students] are speaking freely about potential criminal behavior to the campus, they have waived their Fifth Amendment rights in their criminal trial later on. That transcript can be read to the jury in a criminal case," Cohn said.

It's not clear how many college students have been arrested for protest related violence over the past year, but these three cases reflect the varied responses from universities in determining whether students can return to campus or not.