TriMet's Westside Express Service, known as WES, has never met ridership expectations, but the pandemic has made the rail line's struggles even more pronounced. 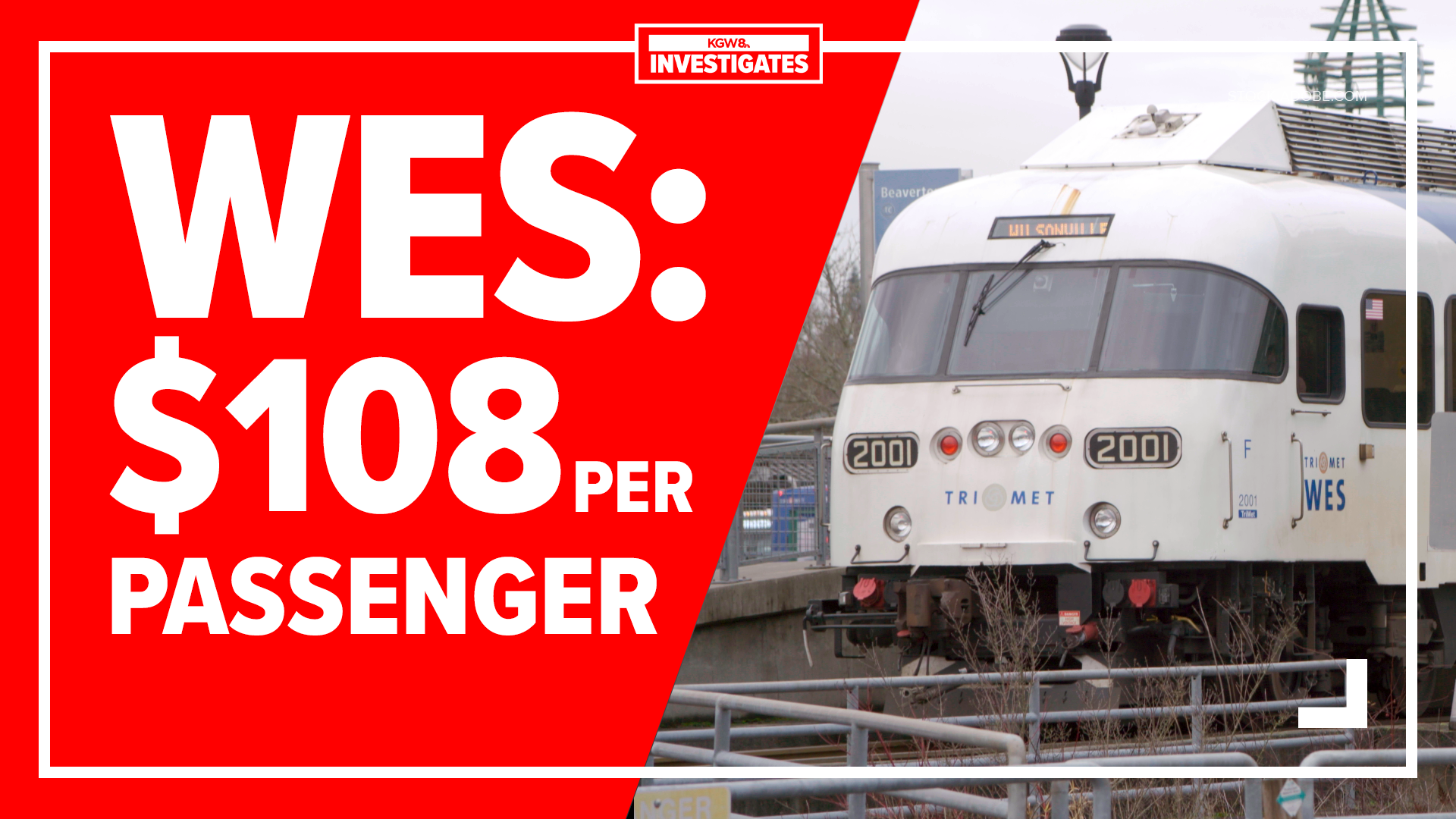 PORTLAND, Ore. — TriMet’s Westside Express Service, known as WES, was already headed in the wrong direction with rising costs and declining ridership. The pandemic has made the commuter rail line’s struggles even more pronounced.

Ridership on WES was down nearly 75% in December 2020 compared to the same month last year, according to the most recent data available.

At the current rate, it costs TriMet nearly $108 per passenger to operate the metro area’s only commuter rail line.

“There’s no market for WES,” said John Charles, president of the Cascade Policy Institute. “They should just admit it was a mistake.”

TriMet launched WES in 2009. The commuter rail operates on nearly 15 miles of track between Beaverton and Wilsonville. Critics argue that its limited system is the problem. WES goes from suburb to suburb, not downtown Portland.

According to a 2019 report on TriMet’s history, the agency said “between 3,000 and 4,000 daily riders were forecast for the line by 2020.” WES has never come close to those numbers, even pre-pandemic.

“So far, the ridership potential has not lived up to the expectations,” said Trimet spokeswoman Roberta Altstadt.

“The destination-type employers haven’t matured in the corridor as quickly as had been projected,” Altstadt said.

WES does have supportive riders who like the free WiFi, comfortable seats and consistent on-time record, Alstadt said, but attracting new riders has been challenging.

The route runs along Portland & Western Railroad freight line through a mix of farmland, wetland and industrial areas.

“If the WES line actually went from Wilsonville into Beaverton and into Downtown Portland, ridership would be a lot higher. But it had to go where the tracks already were,” said Altstadt, who said expanding the commuter rail downtown would be both extremely costly and a logistical challenge.

Since its inception, WES has seen operating costs per passenger dip slightly then rise dramatically.

The pandemic has crippled public transportation nationwide. Ridership has plummeted and revenues have dried up. TriMet is not alone.

As part of an agency-wide reduction in service last April, TriMet reduced WES service by using just two trains making five roundtrips. Prior to that, WES had three trains with eight roundtrips.

When comparing the cost of operating WES versus TriMet’s other services like light rail and bus, it's not even close.

Credit: KGW
This graphic shows the cost per passenger for TriMet for the WES commuter rail, the MAX light rail and its bus service.

TriMet said the commuter rail is always more expensive because it requires two people to operate – an engineer and a conductor – compared to other types of transit, like bus and light rail, which require only one operator.

Even the rail line’s fiercest supporters suggest there needs to be change.

"It is too expensive," said Dan McFarling of the Association of Oregon Rail and Transit Advocates. "The way we are operating it today, we’re not operating it correctly."

McFarling said WES should run more frequently and maybe even extend the line to Salem. Right now, WES only runs during the four-and-a-half-hour morning and evening commutes.

"Study after study has shown that when you have a public transit system, particularly a rail system, and you increase the frequency, the ridership goes up per train," McFarling said.

TriMet coordinates schedules with the railroad. Previously, the agency said it hasn’t pushed for additional time on the line because of low ridership.

Additionally, TriMet is locked into an agreement to use the freight rails for decades. Critics argue those deals should be reconsidered.

"I believe that WES is terminal, and it should be euthanized," Charles said. "There’s a fallacy known as the 'Sunk Cost fallacy,' which is that we’ve already put all this money in and we can’t stop now. My response is: yes, actually you can."

If you have a suggestion for an investigation, or want to blow the whistle on fraud or government waste, email kiboshi@kgw.com.