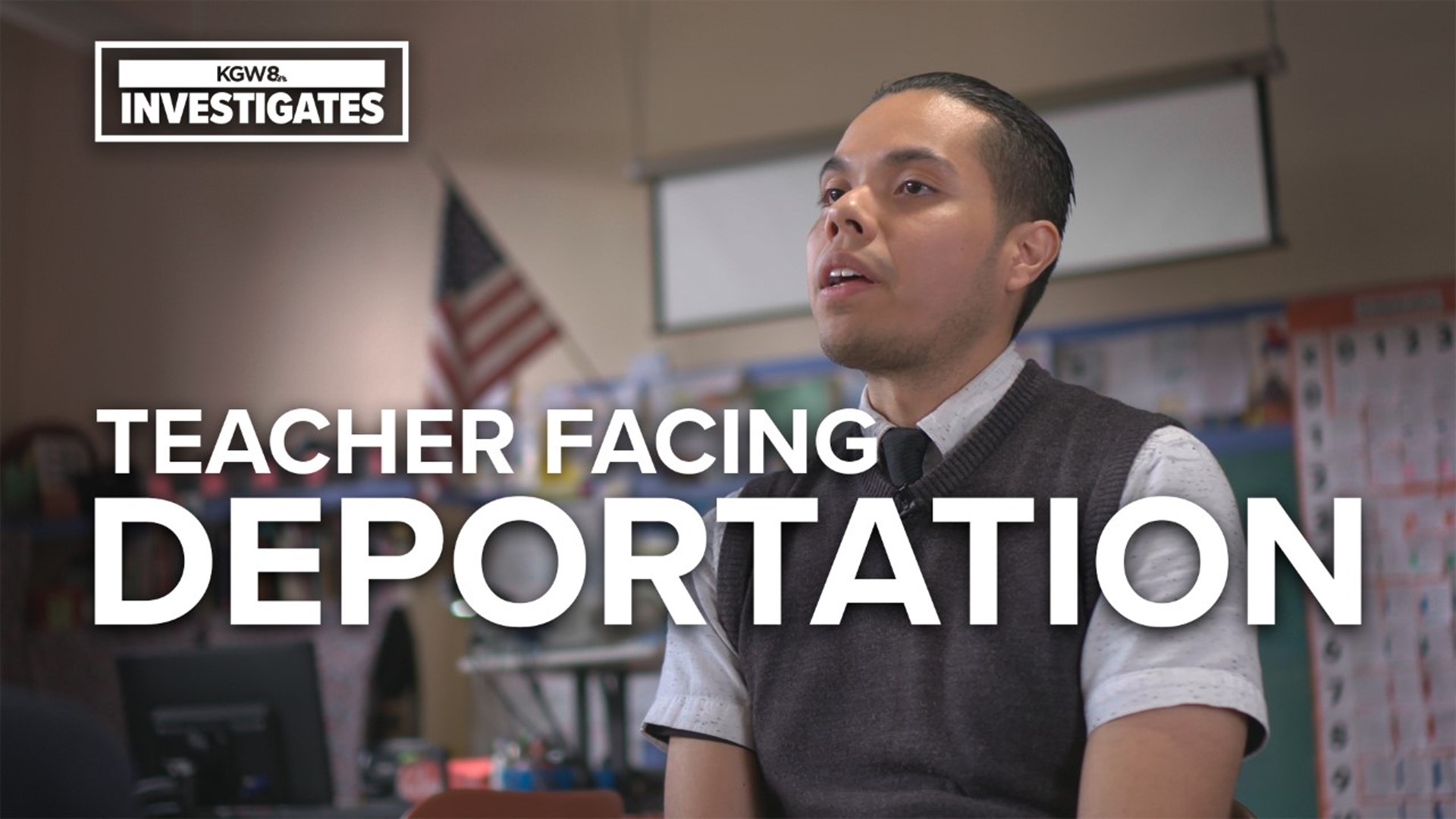 PORTLAND, Ore. — A third grade teacher in Southeast Portland is facing deportation after an immigration judge ruled that he must leave the country.

Hector Canedo-Sanchez teaches at Bridger K-8 School in Portland’s Montavilla neighborhood. He was brought to the United States illegally as a child but has been allowed to live and work in the country under the Deferred Action for Childhood Arrivals program, known better as DACA.

While he still has active DACA status, the federal government has been pushing to deport Canedo-Sanchez because of a drunk driving charge in 2016. Immigration officials continued to push for deportation even after Canedo-Sanchez completed a diversion program and the charge was dismissed.

Canedo-Sanchez continues to teach as his lawyers appeal his deportation order.

Portland Public Schools Superintendent Guadalupe Guerrero has been vocal in supporting Canedo-Sanchez, going so far as to testify at his immigration hearing that Canedo-Sanchez should be allowed to stay in the United States and should continue teaching in his school district.

Canedo-Sanchez, 30, is in his second year teaching a Spanish Immersion class at Bridger.

“It's pretty amazing. I feel like I'm able to connect with them on a culturally responsive level,” said Canedo-Sanchez. “I am noticing that connection with all of my students regardless of their backgrounds or whether their language is English or Spanish.”

Nearly two-in-five students at Bridger are Hispanic and one-quarter are learning English as a second language.

When we met Canedo-Sanchez at the school, his students were chanting his name in the courtyard after school, something he says they do almost every day.

“It's humbling for me to hear them do that and just fills me with energy to, like, really to come back and be on for them,” he said.

Despite support from his students, Canedo-Sanchez doesn’t know how long he has left in the classroom. Last month a federal immigration judge in Portland, Judge Richard Zanfardino, ordered that Canedo-Sanchez be deported.

“I was really thinking about, just my daughter. I can't even express in words how hard -- It's difficult to, to think about. I don’t visualize it,” said Canedo-Sanchez, who has a 7-year-old daughter.

Canedo-Sanchez was brought to U.S. illegally by his parents from Mexico when he was 8 years old.

Credit: KGW
A childhood picture of Hector Canedo-Sanchez hangs outside his classroom.

“I knew that I was an immigrant, but I didn't know that I was different,” said Canedo-Sanchez.

His mentor and former high school teacher, Susan Anglada Bartley, said he was a gifted student who excelled in AP classes and classes that also earned him college credits.

“Hector's the only student who I have ever had who walked from his house and said, ‘I want to be at school on a snow day.’ He wanted to be there because he was really dead-set on achieving this goal of being the first in his family to go to college,” said Anglada Bartley.

Achieving that dream was tricky, not because of his grades or GPA, but because he was an undocumented student.

Anglada Bartley worked hard to help find a school that would accept him despite his immigration status. Whitman College in Washington accepted Canedo-Sanchez and offered him a $55,000 scholarship.

“He received this full scholarship and he also opened the doors for people who come, who are coming behind him,” said Anglada Bartley.

Anglada Bartley was later awarded a national education award for her work in helping undocumented students further their education.

She keeps a photograph from Canedo-Sanchez’s high school graduation in her classroom.

“That's why I still have his photograph in my classroom, and I've had it these 15 years since I had him because I would tell that story and I would tell the story that it was possible. So here we are today and it's a slightly different story,” said Anglada Bartley.

After Canedo-Sanchez graduated college he became a father to a daughter named Kelly.

In 2012, he applied for and received DACA status. Under DACA, he could live and work in the U.S. but would have to update his status every two years.

“I kicked it to overdrive and said, like, 'We need to get some income and DACA is what's available,' and just did the best we could with that,” said Canedo-Sanchez.

Over the next several years, he said his relationship with his wife fell apart.

“The marriage was, you know, not looking so good. I think there was, just a lot of strain on the family, from many different areas financially,” said Canedo-Sanchez.

He said it all culminated to his lowest point in 2016 when he was arrested in Washington County for drunk driving.

The DUII triggered immigration proceedings, he lost his DACA status and he spent a month at the Immigration and Customs Enforcement detention center in Tacoma, Washington.

“I definitely reflected on like, 'Whoa, I need to make this right again,' totally out-of-character moment of weakness,” he said.

Canedo-Sanchez pleaded "no contest” and successfully completed a diversion program. After completing diversion, the charge was dismissed.

He got a job as a janitor at a convenience store, saved money and applied again for DACA status. His DACA status was reinstated.

In 2018, Canedo-Sanchez ran into Anglada Bartley and she told him Portland Public Schools was recruiting native Spanish speakers.

“At that time, I realized, wow, 'He has a degree. Portland Public Schools is hiring right now for this program, for people who have degrees, are native Spanish speakers. What if he might be interested in becoming a teacher?'” Anglada Bartley said.

Canedo-Sanchez went to a Portland Public Schools hiring event. While he was a good student and a college graduate, he thought with no master’s degree or teaching certificate, getting hired would be a long shot.

“I had a dream and I went for it. And I humbly talked to people and just straight up said, 'Hey, this is my situation. This is where I'm at, but this is what I want to do and here’s how I think I can do it,'” said Canedo-Sanchez.

He was accepted into a PPS program where he could teach in the classroom while getting his graduate degree.

“I felt at home I actually felt like, ‘Whoa this is great.’ I'm glad I listened to the community and I hope I could just give back,” said Canedo-Sanchez.

Canedo-Sanchez was then hired at Bridger, the same school where Anglada Bartley is working.

“To actually look out my window and to see Hector, who was very much that student, the one who I kept his picture in my classroom to inspire others for over a decade. To see him out the window with his class, giving his gift like that here in the neighborhood. It's a true gift,” said Anglada Bartley. "And to receive that gift daily, to see that daily, it's a precious thing. And I don't want to look out the window and not see that."

Looming over him this entire time: his status as a U.S. citizen.

Even though the criminal charge was dismissed, and his DACA status reinstated, the federal government was still fighting to deport Canedo-Sanchez.

His deportation hearing didn’t happen until January 2020, four years after the original charge. Canedo-Sanchez’s attorney Philip Hornik said the delay was caused by a major backlog in the immigration court system.

Hector had a large group supporting him at the hearing including friends, family, coworkers and Portland Public Schools Superintendent Guadalupe Guerrero.

“I think it was important that I offer support for this young teacher,” said Guerrero.

Guerrero testified on Hector’s behalf regarding his impact as a teacher.

“Here is a teacher who has lived most of his life here, who went through Portland Public Schools, who's a graduate, who went to college here, who has made a decision because of the opportunity he had in public education to devote his life to educating children in the same community” Guerrero told KGW. "And I'm not going to stand with him? Of course I am."

Hornik argued to the judge that his client should be allowed to stay in the United States.

In order to remain in the country, Canedo-Sanchez had to prove four things to the judge: that he’s lived in the U.S. for the last 10 years; that he has good moral character; that he pays taxes; and, that his daughter would suffer exceptional and unusual hardship if he were deported.

According to Hornik, the immigration judge ruled Canedo-Sanchez met the first three requirements but not the fourth, because 7-year-old Kelly would live with her mother, Canedo-Sanchez’s ex-wife.

The application was denied, and Canedo-Sanchez was ordered deported.

KGW reached out to Immigration and Customs Enforcement officials to discuss the case. Spokeswoman Tanya Roman said she can’t comment on the case because of privacy issues.

Canedo-Sanchez is still fighting deportation. Hornik filed an appeal to the Board of Immigration Appeals in Virginia.

Neither Hornik nor Canedo-Sanchez will travel to Virginia to argue the appeal. The Board of Immigration Appeals reviews the case without oral arguments. Both sides submit appeal briefs stating their case and then the board will make a decision.

Canedo-Sanchez plans on teaching until a decision is made on the appeal, which could be anywhere from six months to one year.

Canedo-Sanchez said he recognizes some people will hear his story and think he broke the law and he should be deported. But he argues that shouldn’t be cause enough for him to be separated from his daughter.

“I honestly feel like my reality right now is one where I'm able to exercise my deferred action as a childhood arrival. I have all the legal documentation to be able to work as a teacher,” he said. “I'm going to do what I can to make sure that, you know, my daughter knows I'm doing whatever I can for her.”