'They’re kicking you while you are down': Wildfire victims face school district tax as they try to rebuild

The Lincoln County School District said wildfire victims are not exempt from Construction Excise Tax because of state law, yet other districts provide a waiver. 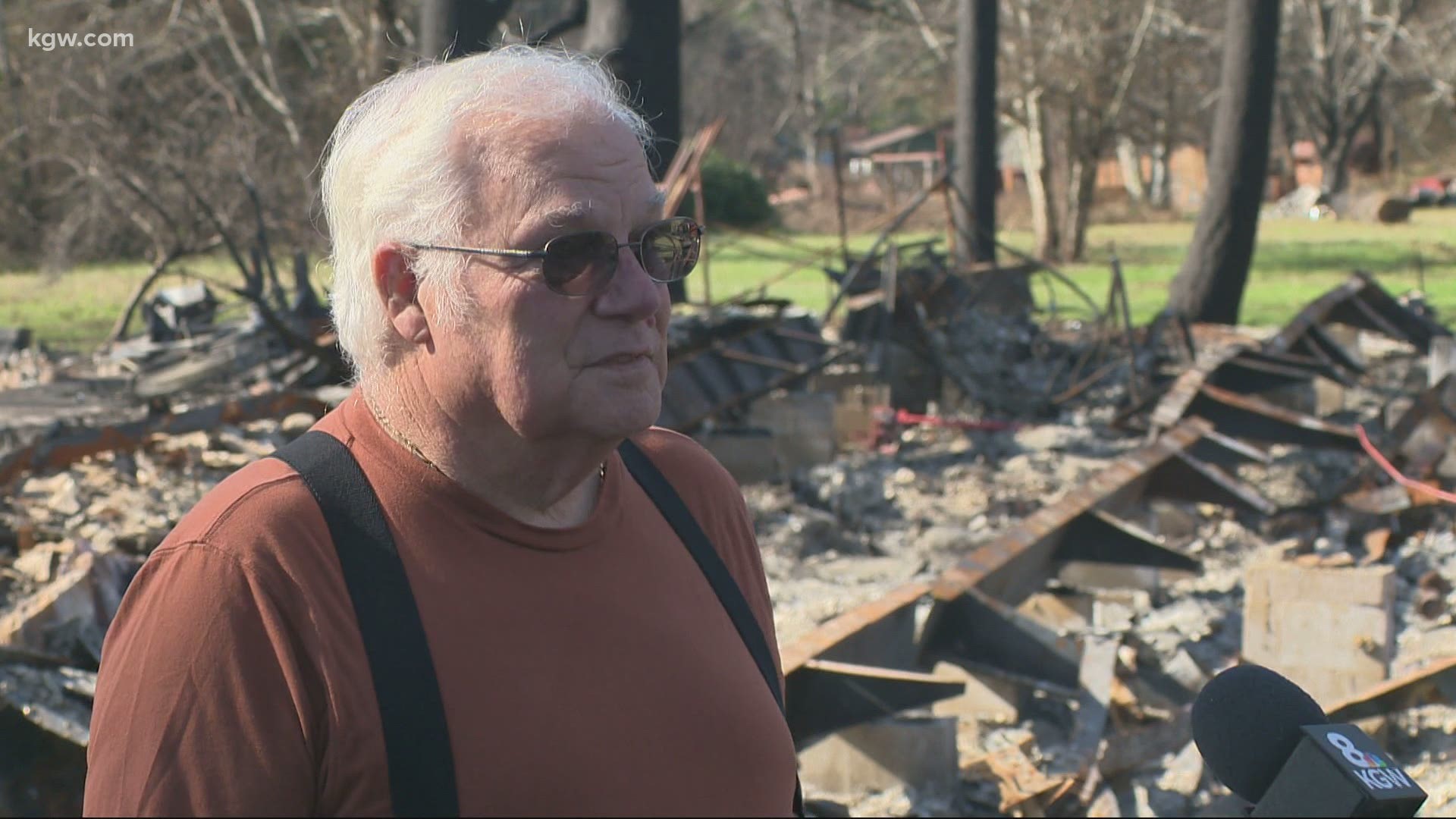 “They’re kicking you while you are down,” said John Skelton of Otis.

Skelton and his wife, Casey, barely escaped before the Echo Mountain Fire destroyed their home near Lincoln City. All that remains on the rural property is a skeleton of steel, broken pieces and melted glass.

“This is home,” said Skelton, who is working with an old friend, Douglas Bernhardt, to rebuild.

When the men applied for a permit, Lincoln County warned they had to pay a new construction tax of nearly $2,000. The men tried to explain this wasn’t new construction. They were simply replacing a manufactured home. County officials wouldn’t budge. Wildfire victims had to pay.

“We didn’t start this fire. We didn’t ask for this,” said Skelton.

More than 300 homes were lost in the Echo Mountain Fire.

“Everything is gone. Only thing left of my property is sheet metal,” said neighbor John Parrott.

Parrott is working with his family to rebuild their Otis home, but fears insurance will only cover so much of the cost.

“I’m living in a trailer,” said Parrott. “It’s going to be 33 degrees tonight. They need to come out there and help us. Not be charging people extra taxes.”

The Construction Excise Tax allows local school districts to charge for construction, if they want. The tax money helps accommodate growth, so districts can pay for larger classrooms and improved buildings.

In Lincoln County, the construction excise tax is $1.24 per square foot for new or replacement homes.

Earlier this month, Bernhardt appeared before the Lincoln County School Board. He asked that wildfire victims receive a waiver, making them exempt from paying the construction excise tax.

“It’s not a new burden on the school district so why should they have to collect that money?” asked Bernhardt.

During the October 13 meeting, Lincoln County School Board members said their hands were tied because of how the state law was written. Despite losing their homes to wildfire, the victims would have to pay.

“There are no exceptions I am aware of,” said Lincoln County School District Superintendent Karen Gray in an email to KGW. “The law requires that we collect it at the board approved rates.”

“I would absolutely support a change that includes exemptions for homes affected by natural disasters,” wrote board chair Megan Cawley in an email.

A review of local tax records shows there are potentially hundreds of Oregonians who lost their homes in the Almeda Fire, the Holiday Farm fire and the Beachie Creek fire who could be assessed similar Construction Excise Taxes by their local school districts when rebuilding.

“This was so not the intent,” said former state senator Ryan Deckert, who sponsored the 2007 legislation creating the Construction Excise Tax.

Deckert explained school districts have the leeway to provide waivers.

“I’d be really disappointed and surprised if they charged the wildfire victims this fee because it would relatively easy for them not to do it,” said Deckert.

The Greater Albany school district doesn’t charge a construction excise tax for “Replacement due to fire or flood loss equal to or less than the square footage of the original structure prior to the loss.”

The North Santiam School District waived its construction excise tax for victims of the Beachie Creek fire during an October 15 board meeting.

“It certainly can be done. Any district can waive it,” explained board chair Mike Wagner.

The temporary waiver applies to new construction within the North Santiam School District boundaries until March 2021. Homeowners requesting an exemption had to own and occupy the property at the time of the fire.

“Somebody who had their home burned- they don’t need to have extra tax put on when they are rebuilding their home,” said Wagner.

Representative David Gomberg said he is working to clear up confusion statewide. Gomberg said he is drafting legislation that would allow school districts to waive the construction excise tax for those impacted by a declared natural disaster or emergency.

“Let’s fix this. That way there won’t be a question,” said Gomberg.

In the meantime, wildfire victims in Lincoln County are frustrated there’s no tax relief as they try and rebuild their lives.

Instead, just the opposite. The Lincoln County School District is looking to increase the construction excise tax. The school board is scheduled to vote on the tax increase November 10.