KGW spoke with neighbors, business owners and those experiencing homelessness to better understand the widespread impact of a single homeless encampment. 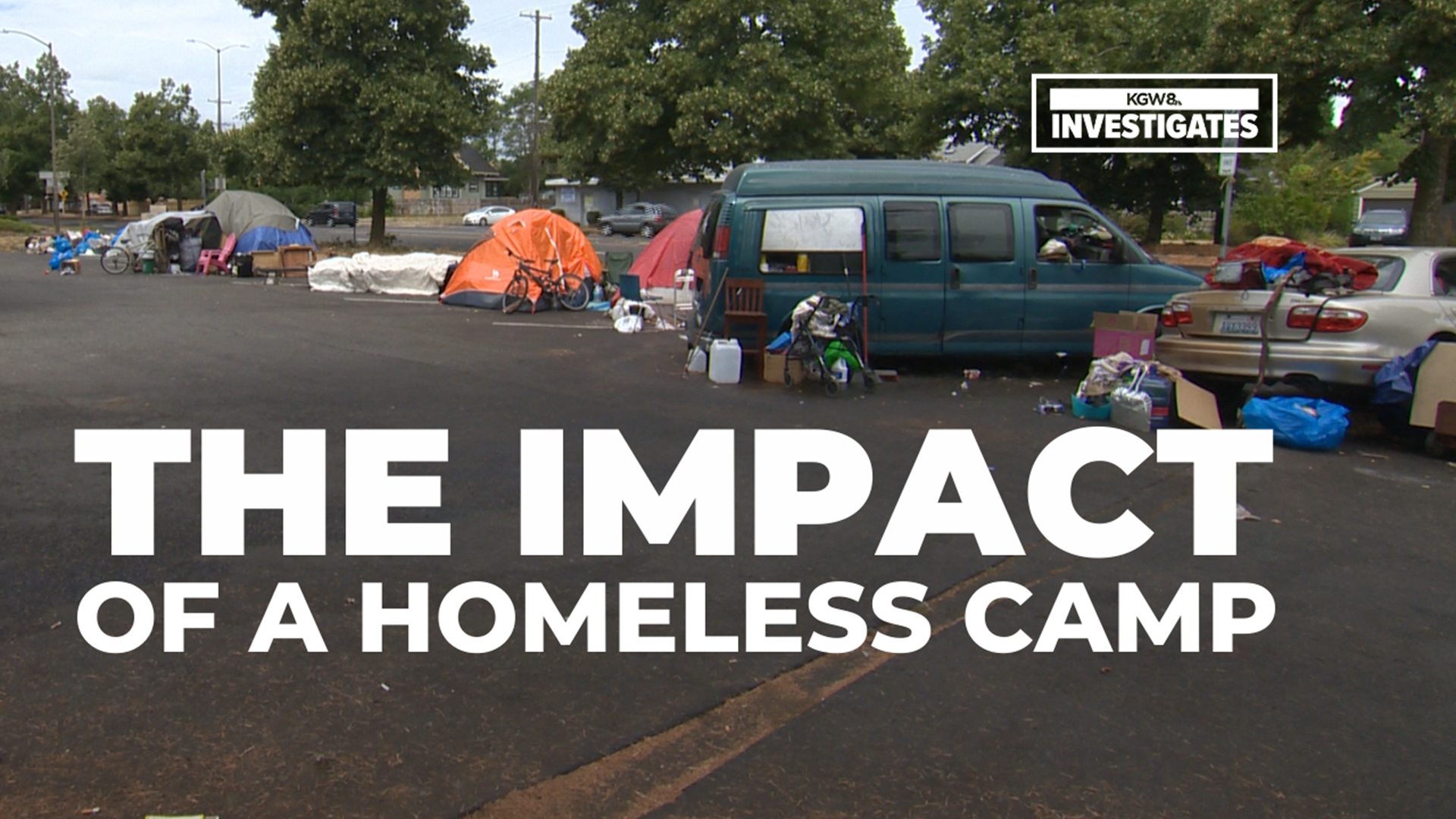 PORTLAND, Ore. — The busy stretch along Southeast Powell and 57th in Portland is no place to call home. Piles of trash and unknown waste surround the tents, and broken vehicles are sprawled across a frontage road.

This troubled space serves as a vivid example of the more than 100 large homeless encampments spread across the city. These growing tent communities are now part of the fabric of Portland — they surround us. And many neighbors have run out of patience.

“It’s not just where the camps are that are being affected,” said neighbor Keely Montgomery. “Our friends and neighbors that live several blocks away — they’re affected too.”

To better understand the widespread impact of a single homeless encampment, KGW focused on Southeast Powell and 57th in Portland. We spoke with neighbors, nearby business owners and people experiencing homelessness living in the encampment.

Over the past two years, resident have filed more than one thousand complaints on the city's website about illegal camping at Southeast Powell and 57th:

Many neighbors described public intoxication, drug use and overly aggressive behavior at the encampment.

“You’ve got prostitution, drug selling. Someone might get drunk. It gets wild,” said Paul Woods, who lives a block-and-a-half away from the encampment.

Woods explained it is not unusual for trouble to spill into the neighborhood, including petty crime like vandalism and theft.

A few families have decided to sell their homes to get away from the encampment.

“It’s really hard. We love our neighbors and the neighborhood, and it’s been tough,” said Keely Montgomery.

INTERACTIVE MAP: Homeless camps reported to the city of Portland

After 16 years in the Foster-Powell neighborhood, Montgomery and her family are packing up and moving to Tigard. She’s sympathetic to those living in the encampment, but after repeatedly finding hypodermic needles on the sidewalk, having bikes stolen and all the stress — Montgomery has had enough.

“Our hope is that, you know, these people get help too and it is not just about us, but it is about them too,” explained Montgomery.

RELATED: 'Right now, they're bouncing people around': City, neighbors and houseless struggle with sweeps near cemetery

Crews have cleaned up or completely removed the encampment at Southeast Powell and 57th almost two dozen times over the past two years with a price tag totaling just over $18,000. Despite those repeated efforts — piles of trash, old food and hazardous waste have returned and become part of the landscape.

Over the past year, city of Portland contractors cleaned the property on six different occasions. Cleaning the site is just one step the city can take. When a site continues to be problematic it gets removed completely. Over the past two years, city contractors have removed the camp twelve times. Those cleaning and removal efforts have cost city taxpayers almost $17,500.

In addition to city crews, the regional government Metro said its Regional Illegal Dumping, or RID Patrol, has cleaned the area seven times over the last two years costing roughly $900.

The Oregon Department of Transportation has also cleaned the area but could not say how often or at what cost.

RELATED: 'Not really fixing anything': Dozens move from park to school after city of Portland clears homeless camp

It is difficult to assess the environmental impact of pollution created from litter at the encampment. Neighbors worry the failure to appropriately dispose of garbage, biohazards and illegal substances could contaminate the ground and water through stormwater drainage systems.

“Where does all this trash end up, in our sewer drains?” asked neighbor Paul Woods.

The city of Portland placed a portable toilet at the campsite.

Records from Portland Fire and Rescue indicate crews have responded to at least ten incidents at the encampment. Many of the fires were determined to be warming or cooking fires. In one case in January, a vehicle caught on fire.

Illegitimate use of public space

There have been more than a dozen complaints to the city of Portland about abandoned cars or debris in the roadway — blocking the right-of-way near Southeast Powell and 57th:

In September, records show TriMet investigated conditions and found part of the encampment prevented rider access to and from a bus stop.

“I can’t say that we’re losing business, but people are more afraid to come to the office,” explained Angelina Kocharov Dzhuga, who works at a law office near the campsite. The office building has been the target of repeated vandalism, theft and trespassing.

Across the street on Southeast Powell, the Classic Denture Center is open for business, but the front door remains locked during business hours.

“For now, the door is always locked. I wouldn’t open the door. I would first look,” explained owner Tanya Poleon.

This section of Southeast Powell, which is controlled by the Oregon Department of Transportation, hasn’t always looked this bad. Images from Google Maps in June 2019 shows empty spaces.  Two years later — it’s become a well-established encampment.

The presence of a burgeoning homeless community has created tension. Passing drivers sometimes yell at those living in the encampment, explained Aysha Martin, who has lived in a tent at Southeast Powell and 57th for the past two months.

“They honk or they may drive by and shout out slurs like ‘You’re a waste of time on this earth. You’re nobody. Get a job!’" said Martin.

The 41-year-old Portland resident said she worked for TriMet before falling on hard times.

“It can happen to anyone,” warned Martin. “Never take life for granted because one minute you are doing well and the next minute you wake up, everything is gone.”

Credit: KGW Staff
Aysha Martin has lived in a tent at Southeast Powell and 57th for the past two months. She was a TriMet employee before falling on hard times.

Martin said she chose this encampment at Southeast Powell and 57th because it is safer than other spots.

“It’s more open. I wouldn’t want to be in some place that is secluded. If something happened, then nobody would know,” explained Martin.

Compared to other encampments, this tent community is relatively small. When KGW visited in mid-August, eight unhoused people were staying at the encampment including five women and three men.

“It’s kind of like home,” said Eddie Lafferty, who grew up in the neighborhood. He and his girlfriend parked their van at the encampment almost six months ago. It is overflowing with belongings and surrounded by piles of trash.

The experience of being homeless can affect a person’s mental health. It can compound what might already be preexisting mental illness or substance use disorders.

“I’m too old for this anymore,” explained Lafferty.

Credit: KGW Staff
Eddie Lafferty grew up in the Foster-Powell neighborhood. He says the encampment feels like home and has lived there for the last six months.

The campsite attracts frequent visitors like Ray Seamster, whose car is overloaded with belongings inside and hastily strapped to the rooftop.

“My friend just lives right here so that’s why I come here a lot,” explained Seamster, a lifelong Portland resident.

Instead of shuffling people around from encampment to encampment, Seamster said the real solution is housing.

“They’re just going to come back here anyway. People get kicked out and three days later and they’re back here,” said Seamster.

The city of Portland plans to start clearing more camps and intends to build six managed villages for people experiencing homelessness by the end of this year. In theory, the plan will move people into a safer space, away from neighborhoods and off the street.

As it stands now, many homeless are simply being pushed from one spot to the next. There’s no real solution.  Campsites dot the map. And with every new or growing encampment, the social and economic impact is multiplied.