Tent City: A closer look at the numbers

A survey of 100 tent campers in Portland shows that many have lived in the city, and a tent, for many years. 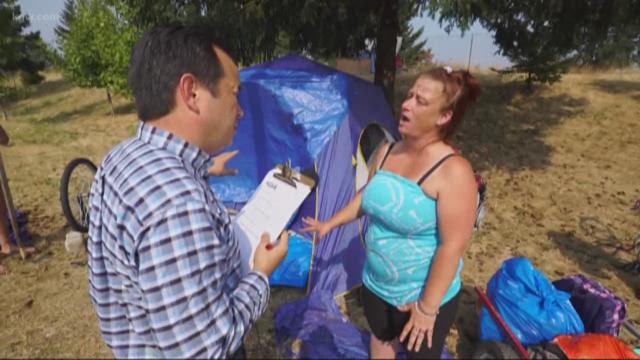 The survey was conducted between July and September 2017 in every quadrant of Portland: Northwest, Southwest, Northeast, Southeast, and North. Campers were able to remain anonymous. Further interviews, both on and off camera, as well as photographs, were voluntary. Campers were surveyed in both highly visible locations, like downtown, and hidden areas of the city, such as forested areas in outer Southeast. The survey itself was simple and brief, in order to allow for widespread participation.

1. How long have you lived in a tent?

2. Where were you living before?

3. How long have you lived in Portland?

4. Why do you live in a tent as opposed to other sheltered locations?

5. Given the choice tonight, would you rather sleep in a shelter or a tent?

The last question may seem redundant, but the goal was to discern whether shelter unavailability was a major contributor to tent camping, or if people see tents as preferable to shelters even if there was plenty of space for them inside.

Question 1: How long have you lived in a tent?

The majority of people (63 percent) surveyed have lived in a tent for longer than a year. For most, tent camping is not a temporary living situation.

Still, there is a sizeable population of new tent campers; 37 people said they have lived in a tent for less than a year.

Question 2: Where were you living before?

A few said they were previously staying in a vehicle, shelter, transitional housing or hotel. Seven said they moved to a tent after living on the street. The “other” answers ranged from living in a trailer to a church to foster care.

Question 3: Why do you live in a tent as opposed to other sheltered locations?

The reasons people have for living in a tent are myriad. Every answer was nuanced and some offered multiple reasons. KGW did not prompt people’s answers, but many fell into the same broad categories.

Eighteen people said they had issues with unsanitary conditions in shelters. Several said they contracted illnesses from shelters, due to other residents. Some said they encountered bed bugs.

Nine people said safety issues, such as inappropriate sexual advances or fighting, kept them out of shelters.

While shelter issues dominated the responses, 18 people also said they just liked independence and open space. Many talked about how much they enjoyed waking up in a natural setting.

Twenty-one said they couldn’t stay with their significant other or pet in a shelter. Some shelters do allow couples and pets, but they are usually full.

Question 4: How long have you lived in Portland?

Question 5: Given the choice tonight, would you rather sleep in a shelter or a tent?

Overwhelmingly, respondents said they would prefer a tent tonight over a shelter, reiterating the many issues campers had with shelters. Eighty-nine percent of people surveyed said they would rather stay in a tent.

The 11 percent who said they would prefer to stay in a shelter were, for the most part, either quite young or older with health issues.

Portland’s homeless population by the numbers:

1,668: Number of unsheltered homeless (sleeping in vehicles, tents, on the street) – the lowest since 2009

71: Percentage of Portland’s unsheltered homeless population who are chronically homeless