Critics argue the city of Portland is using aggressive, heavy-handed tactics to recover the $35 tax.

PORTLAND, Ore. — The city of Portland has been using a private debt collector to go after residents who didn’t pay the Arts Tax. Since 2016, the city’s revenue division has sent 14,600 taxpayers to collections for failing to pay the $35 tax.

Critics argue the tactic is too punitive. If unpaid, the city doubles the amount owed on the Arts Tax from $35 to $70. A private debt collector tacks on additional collection fees and interest. As a result, small unpaid tax bills can easily balloon into hundreds of dollars, creating stress and uncertainty.

“It can change your whole life -- getting hounded to pay a debt,” said Portland attorney and consumer advocate Michael Fuller.

The longer you wait to pay, the more debt collectors make.

In November 2012, 62% of Portland voters approved the Arts Tax. By law, every Portland resident age 18 and older must pay $35. The city bundles the money and then distributes it to help pay for more art teachers and art programs around the city.

Since its inception, the Arts Tax has been a lightening rod of controversy triggering lawsuits and complaints.

“I think its completely unfair,” said Laurel Greenwood of Portland.

Greenwood was confused after getting three demand letters from a private collection agency in Springfield, Oregon. The notices from Professional Credit Service didn’t explain why or who she owed. It was an odd amount: $91.66.

“My husband said this is for that Arts Tax that you are supposed to be exempt from,” explained Greenwood, who thought she didn’t have to pay the Arts Tax because she is on social security for a permanent disability. Greenwood said she sent the city paperwork months earlier, explaining she was exempt but never heard back.

“It’s very confusing. Why are we getting these letters? We are exempt. Why are they sending us to collections?” asked Greenwood. “It was just very confusing to us.”

Greenwood said she also sent documentation to the collection agency in hopes of clearing up any confusion about unpaid taxes and debt.

Residents are exempt from the Arts Tax if their household income is below the federal poverty level and their personal income -- not including social security -- is $1,000 or less. Critics argue this complex formula places an unreasonable burden on the poor and disabled because they must prove they are exempt. 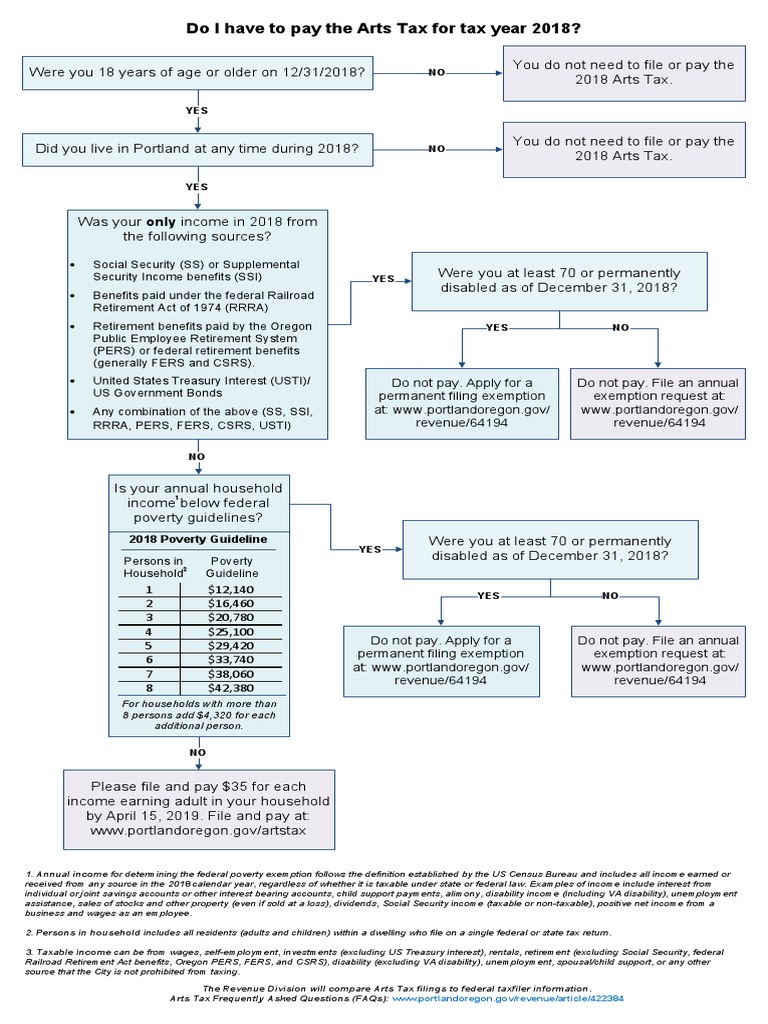 The city of Portland claims Greenwood is not exempt and declined to explain why, citing taxpayer confidentiality. Greenwood provided the revenue division a letter waiving confidentiality, allowing the city to discuss her case with KGW.

Revenue division director Thomas Lannom wouldn’t elaborate on Greenwood’s case except to say there were some “misunderstandings” and she had to pay.

Lannom declined three requests for an on-camera interview regarding the Arts Tax and the city’s use of a private collection agency to recover delinquent payments. Lannom said the public agency would only answer this reporter’s questions in writing.

The city sends a warning letter to residents if they fall behind on the Arts Tax and says taxpayers are sent to collections if they owe $100 or more.

By outsourcing its dirty work and allowing a private debt collector to charge a 23% fee and nine percent interest, the city gets these collection services free of charge.

“It is a common practice for tax agencies to use third party collection agencies to pursue delinquent tax debt,” wrote Tyler Wallace, Portland tax division manager in an email. “It is effective in increasing compliance.”

Debt collectors that work for the government don’t have to work within the confines of consumer protection laws, like the Fair Debt Collection Practices Act (FDCPA), opening the door for aggressive tactics and higher fees.

“This kind of tax is unique,” warned Fuller, the attorney and consumer advocate. “Consumers don’t have any protections under the law from abusive tactics to collect this type of debt.”

The city said Professional Credit Services, the debt collector contracted to go after unpaid Arts Tax payments, complies with FDCPA. The revenue division admits it conducts no audits or reviews to monitor the collection agency’s performance or practices.