KGW found 31 of 90 protest cases have been dismissed by the U.S. Department of Justice, despite warnings there would be “consequences for acts of violence." 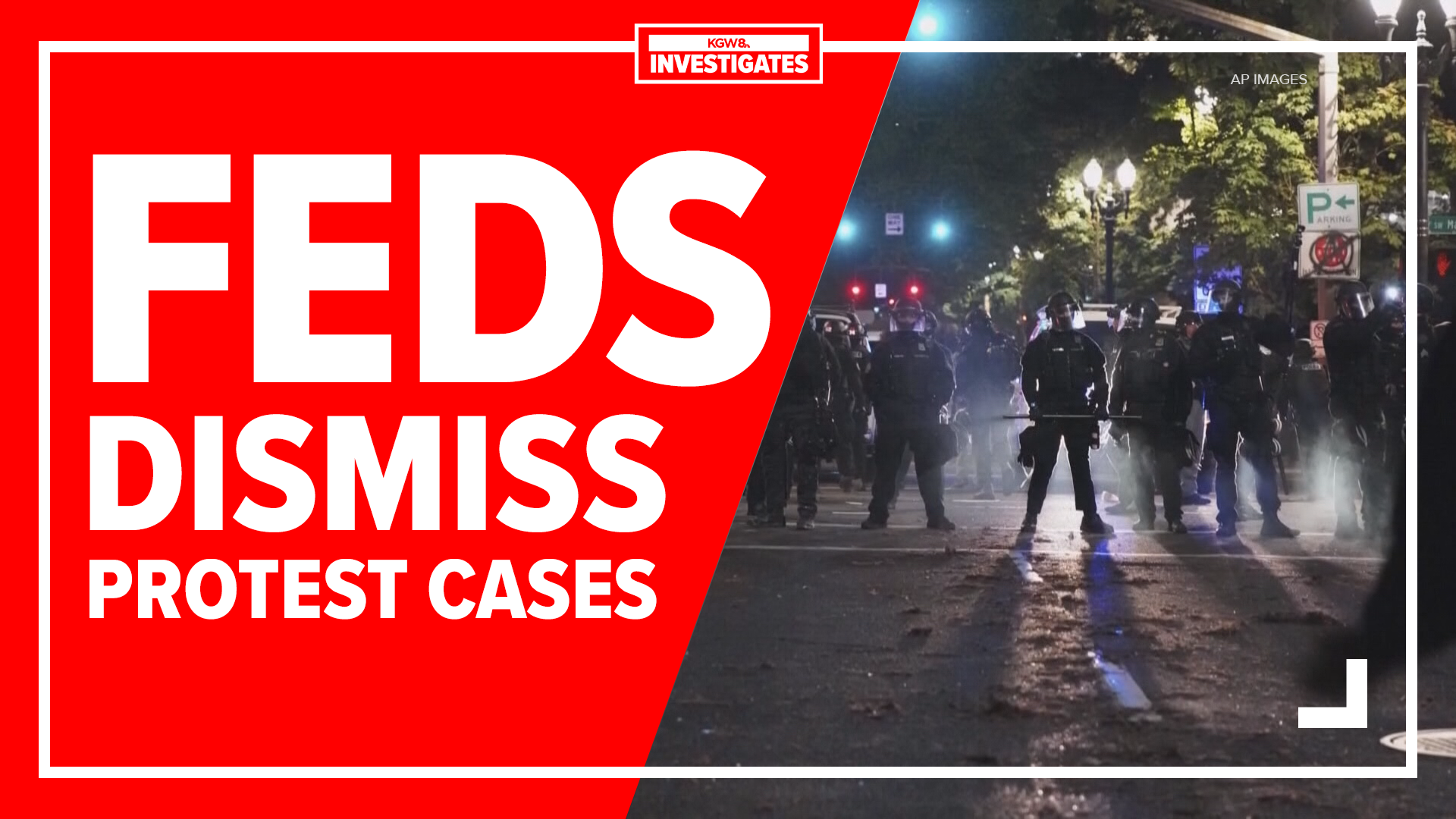 PORTLAND, Ore. — Federal prosecutors have dismissed more than one-third of cases stemming from last summer’s violent protests in downtown Portland, when protesters clashed with federal agents. KGW reviewed federal court records and found 31 of the 90 protest cases have been dismissed by the U.S. Department of Justice, including a mix of misdemeanor and felony charges.

Some of the most serious charges dropped include four defendants charged with assaulting a federal officer, which is a felony. More than half of the dropped charges were "dismissed with prejudice," which several former federal prosecutors described as extremely rare. “Dismissed with prejudice” means the case can’t be brought back to court.

The dismissal of protest cases runs counter to the tough talk coming from the U.S. Department of Justice last summer. Billy Williams, then-U.S. Attorney for Oregon, vowed there would be consequences for the nightly graffiti, fires and vandalism outside the Mark O. Hatfield United States Courthouse.

“Make no mistake: those who commit violence in the name of protest, will be investigated, arrested, prosecuted, and face prison time,” said Williams in a Sept. 25, 2020 press release.

RELATED: 'This is just mindless violence': US Attorney for Oregon critical of response to protests by local leaders

In a recent interview with KGW, Williams explained the cases were dismissed in instances where prosecutors didn’t believe they could prove a case beyond a reasonable doubt.

“Each case was analyzed for the evidence that we had at the time," said Williams. "Careful decisions were made on whether or not someone should be charged based on the evidence."

Williams explained decisions are made on a case-by-case basis.

“Everything is case-specific when you go about these cases being processed through the system,” said Williams, who stepped down on Feb. 28. U.S. attorneys are traditionally asked to resign at the start of a new administration.

“I've never made a decision in my career based upon political pressure or institutional pressure,” said Williams.

By summer’s end, scores of people would be arrested on various federal charges by agents guarding the federal courthouse in Portland. The names and ages of those arrested were published by the U.S. Department of Justice and U.S. Homeland Security in press releases. Additionally, photos of defendants’ belongings, from helmets to gas mask to goggles, were included in court documents.

Most of the defendants whose protests cases are still pending have seen their trials delayed, largely because of the pandemic. Those defendants face a mix of felony and misdemeanor charges. Three defendants cut plea deals resulting in probation and home detention. Two of the plea agreements required a relatively short prison sentence of 30 days. Several people closely involved with the protest cases, who asked not to be identified, said they expect many more federal charges to be dismissed soon.

Laura Appleman, a law professor at Willamette University who is not directly involved in these cases, believes federal prosecutors aren’t making decisions based on politics. Rather, she thinks they’re considering resources and an already busy caseload.

“The U.S. Attorney’s office has to go through and very carefully ask, ‘Is it worth using our limited time and energy to prosecute each and every of these federal misdemeanors?’” Appleman explained.

The most vigorous legal fight, laid out by public defenders in lengthy court filings, has involved nearly a dozen Portland protesters charged with “civil disorder." Defense attorneys argue the obscure law enacted during the 1960s civil rights era is unconstitutional.

At least 11 of the dismissed federal protest cases were dropped on or after the inauguration of President Joe Biden. With a new president and soon new a U.S. Attorney in Oregon, it’s unclear how these cases will be handled going forward. Like the protests themselves, there will undoubtedly be opposing views. Some will argue by dismissing cases, there’s no accountability while others will claim the feds never should have filed protest cases in the first place.

RELATED: After vowing to crack down on protest violence, Portland mayor says change will 'take some time'