"Right now, we have about 3 million in excess dollars," said Dave Benson, a senior manager for the Portland Bureau of Transportation. 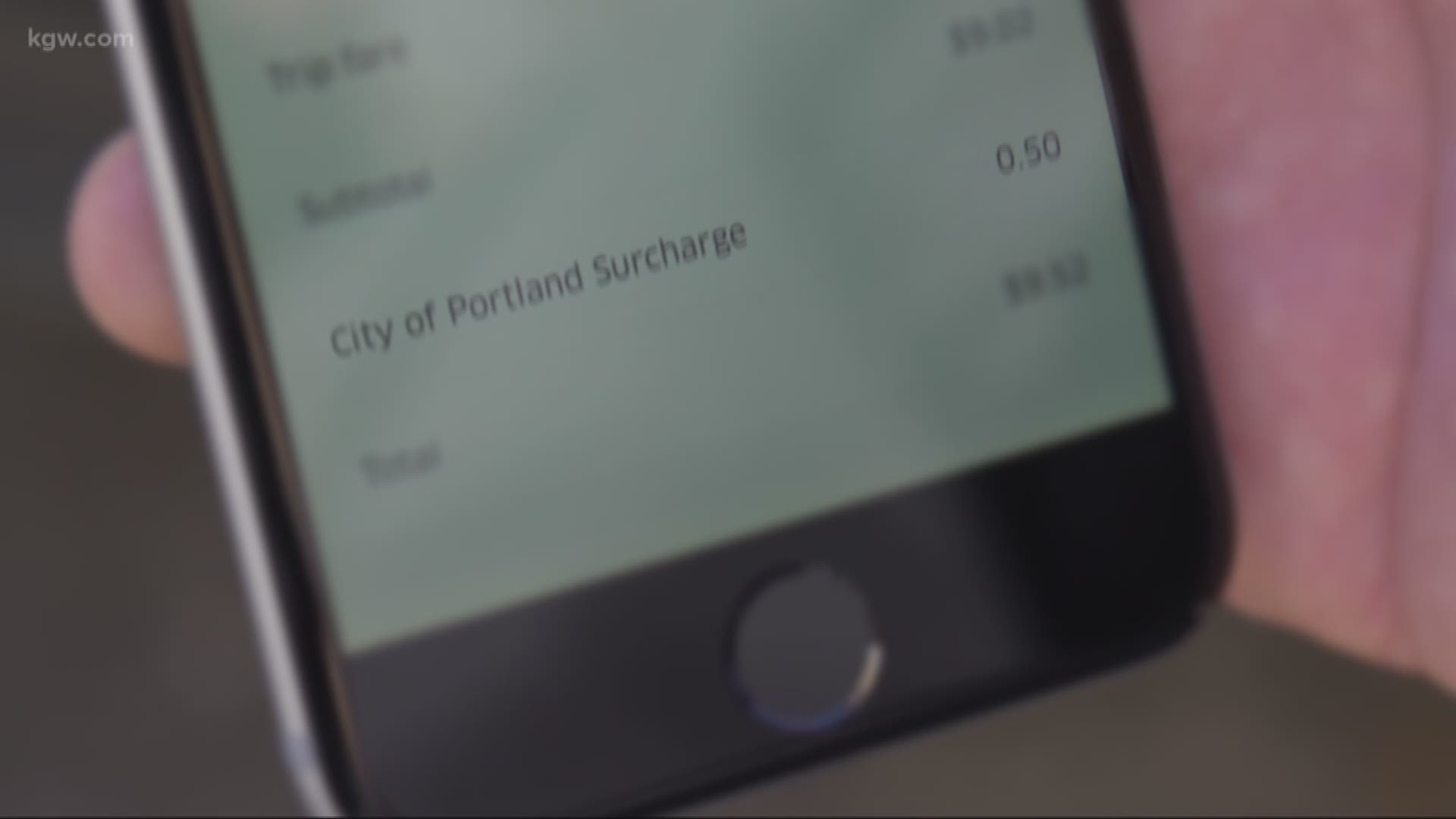 PORTLAND, Ore. — The city of Portland has tapped into an unexpected stream of revenue: Uber and Lyft. A 50-cent surcharge, which is paid by passengers for every ride-hailing trip or taxi, has raised $6.7 million since 2016, according to data obtained through a public records request.

By law, the revenue can only be used for enforcement and regulation of the ride-hailing and taxi industries, which puts the city in an unusual position. The 50-cent surcharge is currently bringing in more money than the city needs to run the program.

“The program is not designed to make money,” said Dave Benson, a senior manager for the Portland Bureau of Transportation. “Right now we have about 3 million in excess dollars.”

As ride-hailing services increase in popularity, the city expects to generate even more revenue.

Last year, Uber, Lyft and taxis recorded a record 10 million rides in Portland, according to PBOT.

“Ten million rides is enough for 15 rides for every man, woman and child in the city of Portland,” said Benson. “I thought we would have hit the ceiling by now. Every quarter we see the numbers going up.”

For the first three quarters of 2016, the 50-cent per-ride fee generated $2.3 million. In 2017, revenues jumped to $4.4 million. This year, city officials say collections continue to rise.

Critics argue the city should rethink the 50-cent surcharge, because the government is taking in more money than it needs.

“The city of Portland is notorious for trying to grab money wherever they can,” said Steve McKinney, a driver for Uber. “If they think people have more money in their pocket then they are going to take some of it.”

“I think the city likes to tax people wherever they can,” said Paul Nicewonder, a driver for Lyft.

PBOT explains the bulk of the money is used to help pay for enforcement efforts. Last year, 10 city inspectors conducted roughly 3,300 on-street field audits of Uber, Lyft and taxi drivers and their vehicles.

PBOT proudly notes that it does more spot checks than any other city in the country, except for New York City.

“Many, many cities aren’t doing on the street inspections at all,” said Benson of PBOT. “We think it keeps the consumer safe.”

For-hire drivers are required to show a paper copy of their business license, insurance and carry safety equipment like a fire extinguisher and first aid kit.

A 2017 study by PBOT found 28 percent of Uber or Lyft drivers had at least one violation. PBOT said the number of violations has steadily decreased.

“Just by virtue of knowing that we are out there, I think they are paying attention to the details,” said Benson.

Next year, PBOT intends to spend $600,000 of the extra funds on a wheelchair accessibility fund. The agency will also pay for a congestion study to examine the impact of Uber and Lyft on Portland traffic.

“We try to be really good stewards of the dollars we collect,” said Benson. “That’s why we have excess funds left over.”

Portland taxi drivers complain the 50-cent per-ride surcharge has created more headaches for a business that is already struggling.

“The city has placed us in a position of being tax collectors for them,” said Steve Entler, general manager of Radio Cab. He estimates the city took in almost $300,000 in rider fees from his company last year.

“They’ve become addicted to the additional revenue,” he said.

Many taxi drivers believe the surcharge has resulted in smaller tips because passengers lump the charges together.

“The ride that used to be $8 is now $8.50 because of the surcharge,” explained Entler. “But the customer hands you a $10 bill and says keep the change- who’s really paying the 50 cents?”

“Our focus in Portland is to continue working with city officials to insure that the regulations governing private for-hire transportation encourage the availability of safe, affordable and reliable transportation for riders, and flexible earning opportunities for drivers,” wrote Nathan Hambley, a spokesperson for Uber for Oregon in an email to KGW.

Lyft did not respond to a request for comment.

Across the country, cities and states are enjoying a similar windfall after imposing fees or taxes on ride-hailing companies or their passengers.

In New York, a state task force has proposed a surcharge of $2 to $5 on Uber and Lyft as part of a broader plan to improve congestion and raise money to improve public transit.

In Chicago, a 15-cent surcharge on ride-hailing trips is helping pay for improvement of the city’s train system.

“If you look at it, Uber and Lyft are really an easy target for cash-strapped municipalities,” said Harry Campbel, an Uber and Lyft driver who writes a blog called The Rideshare Guy.

Some Uber and Lyft drivers in Portland would like to see the surcharge pay for pothole repair or other road improvement projects.

“I would really like it to go to the streets,” said Mark King, an Uber and Lyft driver.

Unlike other cities, Portland can’t divert the money for other projects. City charter requires the 50-cent fee be used to fund all program costs required to administer the ride-hailing and taxi program -- nothing else.

Other nearby cities, including Beaverton and Gresham, don’t have a surcharge and city officials tell KGW they have no plans to add fees on ride-hailing or taxi trips.

PBOT says it plans to discuss the surcharge with the city council this spring.

Critics say the obvious question is, Should Portland continue to charge customers an extra 50-cents per ride when the city is making more money that it needs?

“I think that’s a fair question,” responded Benson from PBOT.