Oregon Employment Department has seen a surge in identity theft cases, including 2,157 cases opened in November. 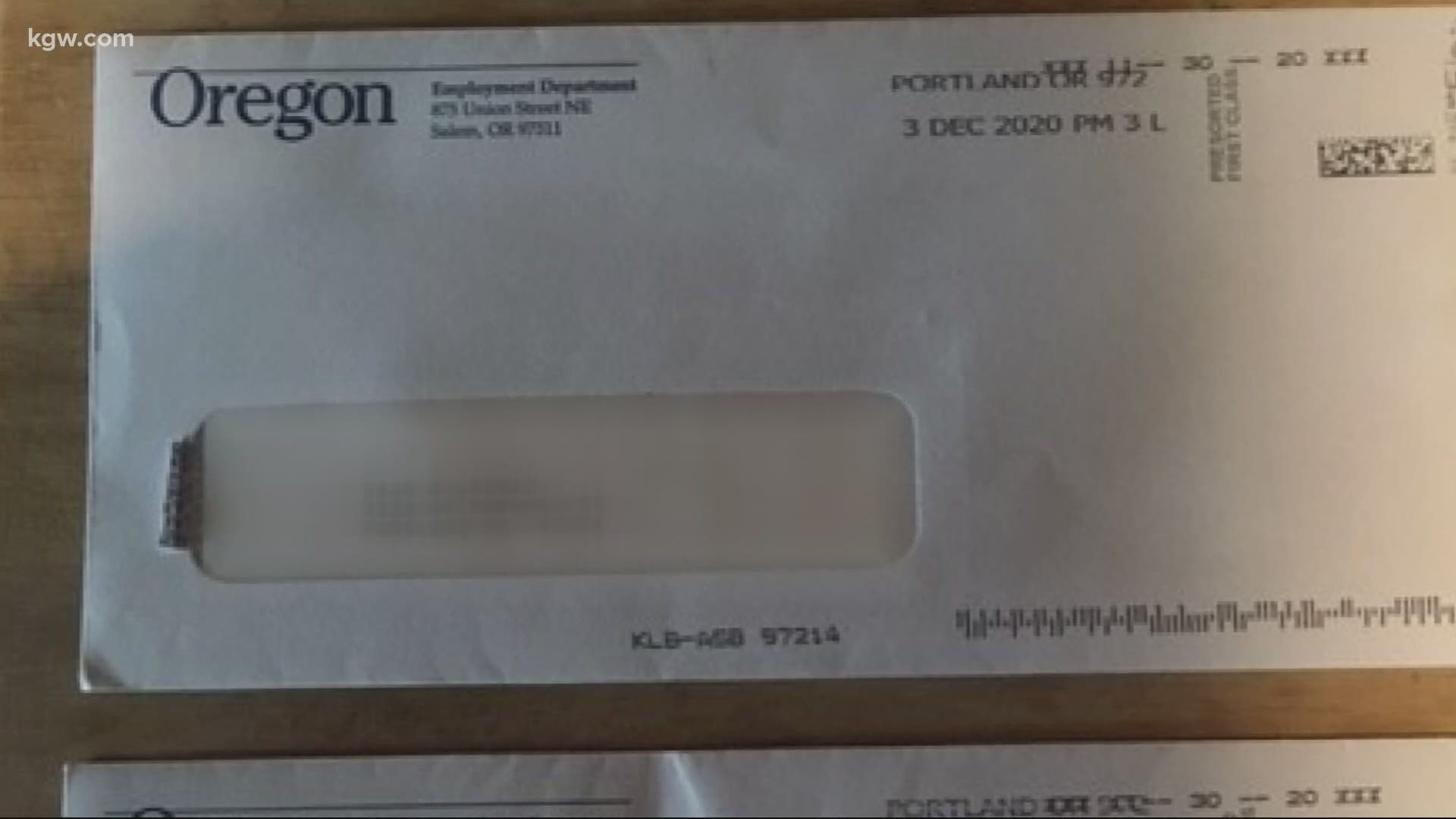 PORTLAND, Ore. — Amy Anderson knew it had to be a mistake when unemployment checks started showing up in her mailbox. The Portland woman didn’t file for unemployment.

“It went from one letter to six to 12- they just grew in numbers,” said Anderson.

And the unemployment checks keep coming. Since early November, she’s received dozens of envelopes from the Oregon Employment Department (OED), despite notifying the agency. Each letter listed her home address, but someone else’s name.

“It’s definitely a widespread problem,” said Parker Crucq of the cybersecurity firm Recorded Future. Crucq explained that nearly every state has been the target of organized unemployment fraud - including Oregon.

OED has seen a growing number of identity theft cases in the past year, including a record 2,157 cases opened in November, according to data obtained through a public records request.

“We have seen upticks in fraudulent claims being filed,” explained David Gerstenfeld, director of the OED.

Over the past two weeks, KGW has heard from numerous people who received mysterious letters in the mail from the state employment department.

A man in North Portland reported his elderly neighbor has received dozens of letters addressed to strangers. He helped return them to a postal carrier.

James Moriarty of Estacada found his mailbox filled with 30 unemployment checks made out to his father-in-law, who died last year.

“He lived, worked and retired in California,” said Moriarty who is working to return the checks totaling $12,000. “I just don’t understand how someone at the employment office could miss that.”

Moriarty said he’s had difficulty notifying the agency of fraud because phone lines are jammed.

Agency director Gerstenfeld said the historic volume of applicants combined with new programs is challenging unemployment systems in every state. Oregon has paid $6.1 billion in unemployment benefits since March. Unemployment insurance has become a target for fraudsters during the pandemic.

“Some overpayments have happened, and some fraudulent payments have gone out,” said Gerstenfeld, who declined to provide an exact amount lost to fraud.

The agency has intentionally revealed little about its investigations to avoid tipping off the bad guys.

In May, the U.S. Secret Service warned of a massive operation to file fraudulent unemployment claims in states around the country, like Washington. The Secret Service attributed the activity to Nigerian scammers and said millions of dollars had been stolen.

Victims of identity theft often have no idea they’ve been targeted by cybercriminals who’ve bought or stolen their personal data online.

KGW used the names on the letters sent to Anderson to locate several victims across the state. One man learned his identity had been compromised after being notified by his employer that an unemployment claim had been filed. His company’s payroll department flagged the claim as fraudulent and notified the state in late October. The man also tried to call the state agency to warn the claim was bogus, yet unemployment checks were still sent out in his name. The checks arrived in Anderson’s mailbox in November and December.

The state declined to explain why it sent checks for a fraudulent claim despite being warned, citing privacy laws. The agency also declined to discuss strategies used to identify and prevent fraud.

“I like detective work but this one’s got me puzzled,” explained Anderson, who still doesn’t understand why checks are being sent to strangers.

Crucq, the cybersecurity expert, said similar schemes have been reported across the country where crooks use false addresses in hopes of stealing the checks.

“Some of these crews will actually set up shop and bounce from state to state for a short time, renting out something like an Airbnb while they try to intercept some of the letters associated with unemployment claims in the mail,” explained Crucq.

In October, federal authorities charged a Michigan for defrauding the Michigan Unemployment Insurance Agency and stealing the identities of residents. Federal prosecutors said Andre Taylor Jr. concocted a scheme to intercept unemployment benefits mailed to his family members or sent to specific routes were letter carriers were allegedly bribed to secure the unemployment benefits.

There’s no indication the Michigan case is connected to letters received in Oregon.

Similar arrests have also been made in California, Florida and elsewhere around the country.

Whatever the scheme, Anderson explained the criminals didn’t get anything from her mailbox. It’s secure. She sent the unopened envelopes back to the state of Oregon.

If you receive suspicious letters from the Oregon Employment Department, you should immediately file a report online or call 1-877-668-3204, then return the letters clearly writing “Fraudulent” and “Return to Sender” on the envelopes.

The FBI advises the public to be on the lookout for the following suspicious activities:

Have a story idea for Kyle? Send him an email.