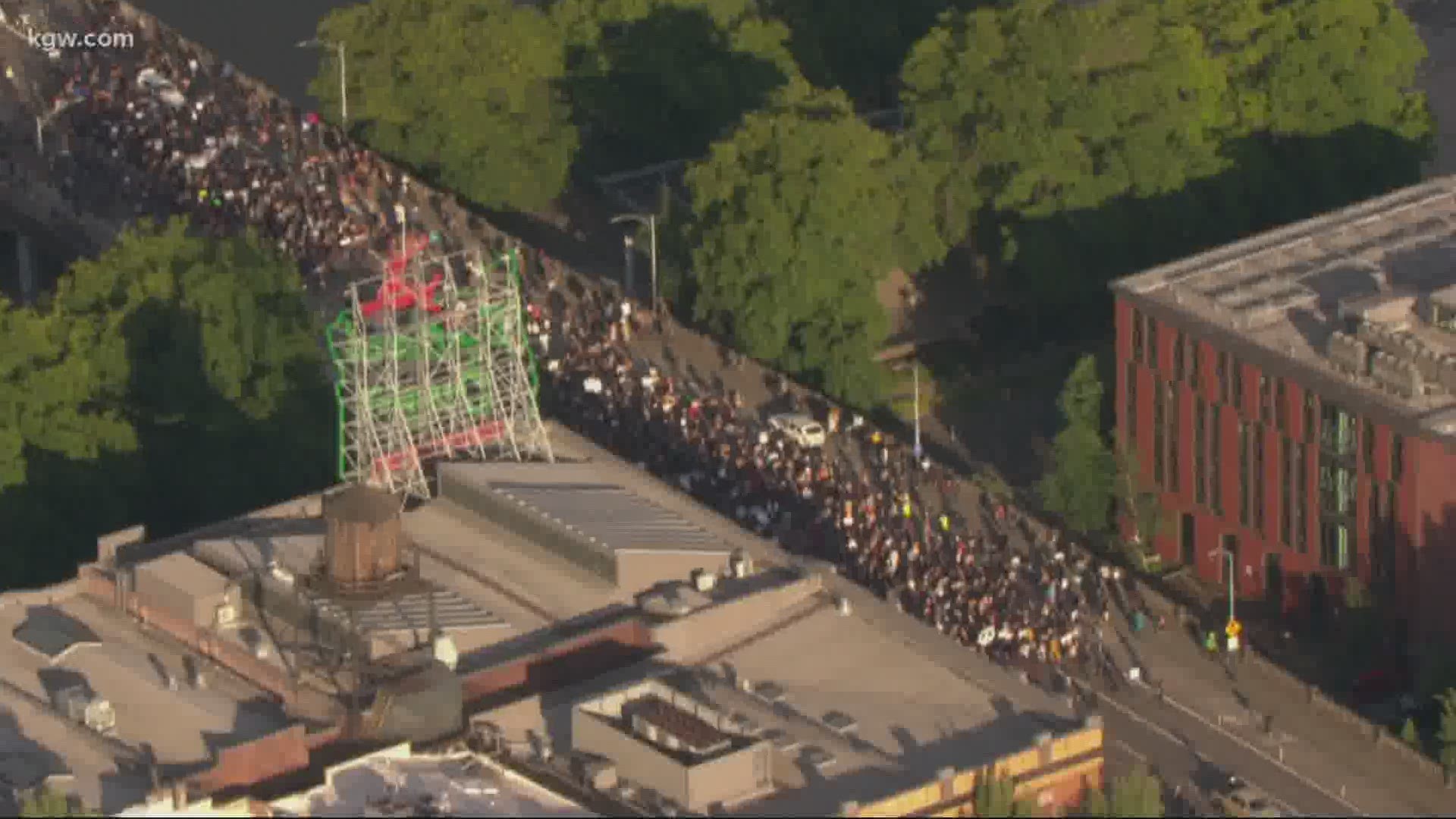 The Cessna Caravan flew just above a Portland Police Bureau aircraft in wide, counterclockwise circles over demonstrators for almost four hours before returning to Olympia, Washington.

“We are concerned to learn that there are planes flying surveillance missions over Portland during protests,” said Sarah Armstrong from ACLU of Oregon. ”It raises questions about a lack of transparency. We don’t know what equipment. We don’t know what agency.”

A search of publicly available flight records showed the same fixed-wing aircraft plane flew similar patterns over St. Louis one week earlier, as thousands of demonstrators took to the streets.

BuzzFeed News reporter Peter Aldhous said the company, which appears to have no official paperwork other than aircraft registrations, is a front for the U.S. Marshals Service.

“It is not that unusual for federal law enforcement to operate behind fake company addresses. The FBI does it. The DEA does it,” Aldhous said in an interview with KGW.

RELATED: Who is flying circles over Portland protests?

Aldhous explained the plane flying over Portland had the same tail number as the plane featured in the Buzzfeed News investigation. FAA records obtained by Buzzfeed News showed the aircraft is equipped with a sophisticated camera, a networking system (similar to Wi-Fi, which allows agents to communicate with other aircraft or people on the ground) and surveillance equipment to follow GPS or radio trackers placed on suspects’ cars.

It is not clear if the plane can capture cellphone data.

“They do have the capacity to carry devices that can be used to track cellphones, but I would be very cautious about jumping to any conclusions about whether that was going on here,” said Aldhous.

In a statement, a spokesperson for the U.S. Marshals did not acknowledge the plane or address the flights over protesters.

Wade explained any investigative techniques are consistent with federal law and subject to court approval.

“Any investigative techniques which the Marshals Service uses are deployed only in furtherance of ordinary law enforcement operations, such as the apprehension of wanted individuals, and not to conduct domestic surveillance, intelligence-gathering, or any type of bulk data collection,” wrote Wade.

Portland Police said its Air Support Unit saw the aircraft flying Saturday but did not have communication with the plane. A spokesperson explained, it has not requested any aviation support outside of the Portland Police Bureau and had no knowledge of the aircraft.

The government’s use of surveillance planes to watch over people protesting in various cities has attracted the attention of three dozen Democrats in Congress, including Oregon Reps. Earl Blumenauer and Peter DeFazio. They’ve asked federal agencies to stop the practice.

“It is inexcusable for what appears to be a federal domestic law enforcement agency using advanced technologies and tactical support to conduct surveillance against peaceful protesters. But further, to hide that fact under the guise of a shell company is outrageous and deeply disturbing,” said Rep. Blumenauer.

“If true, this potential government data collection and surveillance of Americans who are peacefully expressing their First Amendment rights is yet another example of government abuse of surveillance programs," wrote Rep. DeFazio in a statement. "It is an unconstitutional breach of privacy by our government and has no place in our democracy.“