The employee called 9-1-1 three times in a short period to report he was surrounded in his car and felt threatened. 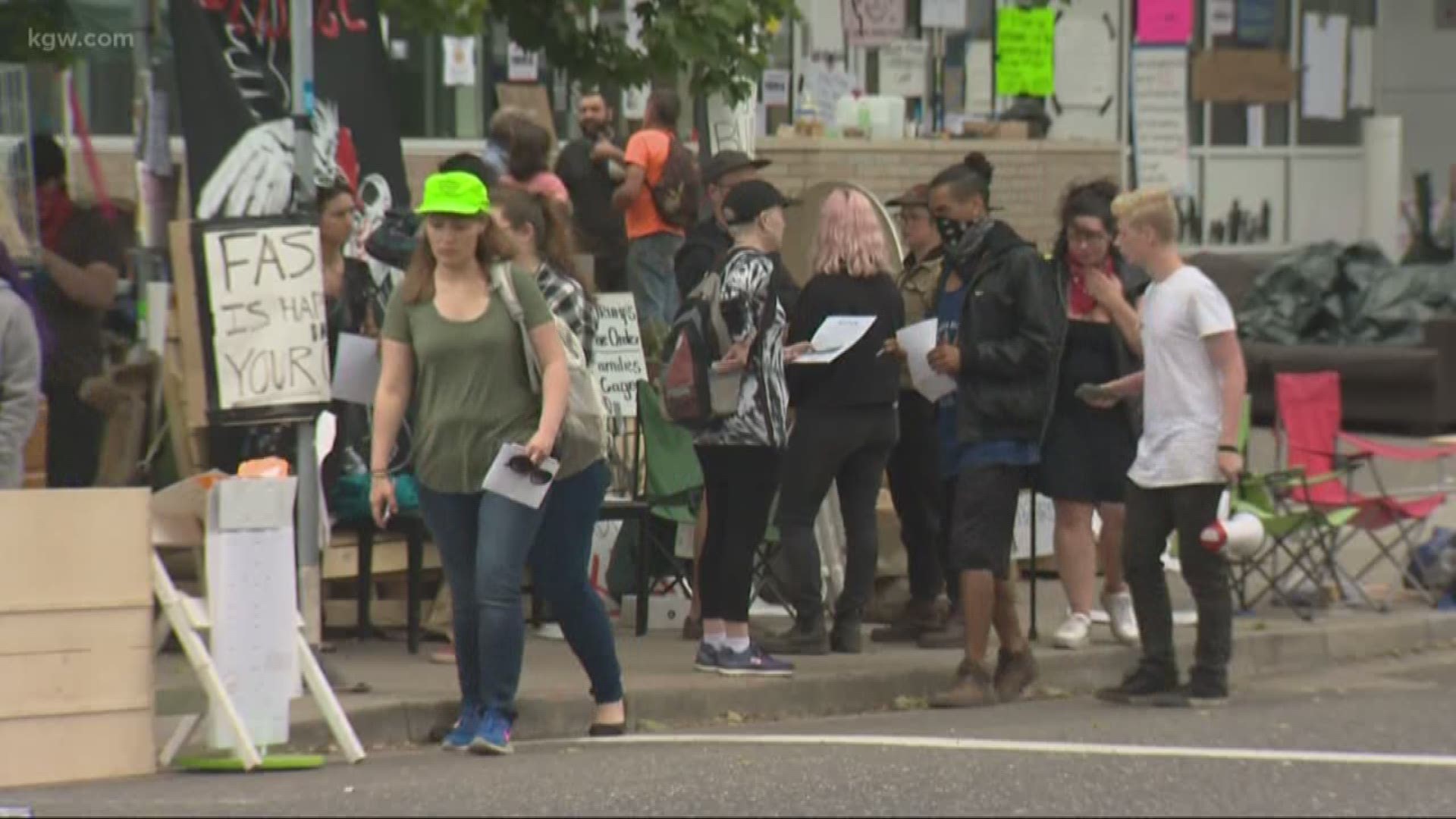 PORTLAND, Ore. — Newly released 9-1-1 calls show Portland Police officers did respond to repeated calls for help from an Immigration and Customs Enforcement worker who feared for his life after being surrounded by protesters during a weeks-long protest in June.

The employee called 9-1-1 three times in a short period to report he was surrounded in his car and felt threatened.

The union representing ICE officers has previously used the June 19 incident as an example of how local police didn’t show up because Portland’s mayor ordered them not to intervene.

However, the new recordings show Portland Police officers responded to the calls for help but didn’t immediately intervene because they were outnumbered by Occupy ICE demonstrators. An emergency dispatcher said officers were waiting for more help to arrive before moving in.

KGW obtained the recordings through a public records request.

On June 19, an ICE student intern called 9-1-1 at 1:09 p.m. to explain his vehicle was surrounded by protesters. Demonstrators from the Occupy ICE protest were blocking him from leaving the ICE offices in southwest Portland. Listen to the 911 call

Dispatch: Why are they surrounding you? What is there.

Caller: ‘Cause I am leaving my job to go pick-up my daughter and you’ve got a bunch of people out here blocking me from getting out of the parking lot.

The emergency dispatcher asked the caller about his exact location and took down contact information.

Dispatch: Alright, I’ll let the officers know and I’ll have them either stop by or give you a call.

Caller: Ah, thank you very much. Can you have an officer hurry up because they are telling me they are going to kill me.

The dispatcher asked about the threats and any possible weapons. The man said he spotted someone with a knife.

The emergency dispatcher told the man to keep himself safe and hung up.

Caller: Yes, ma’am. I called a few minutes ago. Ah, I have protesters surrounding my car. They’re trying to deflate my tires.

The man repeated that he was trapped in his vehicle and surrounded by protesters on northbound Macadam Avenue. He told the dispatcher he was not injured. Listen to the call

The dispatcher told the man police were responding.

Dispatch: Yea, they’re already on the way and have been for a while. Cause they’re getting out of hand they need officers to meet first and go walk in cause they’re not just going to walk in with just two people since there are so many people out of hand.

At 1:28 pm, the man called for a third time. He explained that protesters appeared to be vandalizing his car. The dispatcher recognized that the ICE worker had called before. Listen to the call

Caller: I did ma’am, but it’s getting worse and worse.

The man explained the situation appeared to be escalating.

Caller: I don’t know what they are trying to do, but I feel like my life is in danger. I need somebody to come out here fast.

Dispatch: They’re already nearby. They’re waiting to walk in together as a group so that they are safe themselves from all the protesters ‘cause there are about 200 of them and we only have five officers there.

The caller was eventually able to drive away uninjured before Portland Police officers reached him.

Caller: Ma’am, I just had a chance to be able to get out through the front of where I was stuck. I was able to leave.

The dispatcher gave the ICE worker instructions to meet officers a few blocks away and file a report.

In July, a local lawyer for the National Immigration and Customs Enforcement Council sent Portland Mayor Ted Wheeler a cease and desist letter demanding he end a policy of not responding to calls for police services from ICE employees.

Sean Riddell, the local lawyer for the ICE union, declined to answer KGW’s questions about the 9-1-1 calls. Instead he offered a statement:

“For 30 days Mayor Wheeler did not enforce the law in a particular section of the city for political motive and this is evidence of that,” said Riddell.