Despite efforts to fix the building’s water system, residents at Rosemont Court are still getting sick and health officials don't know why. 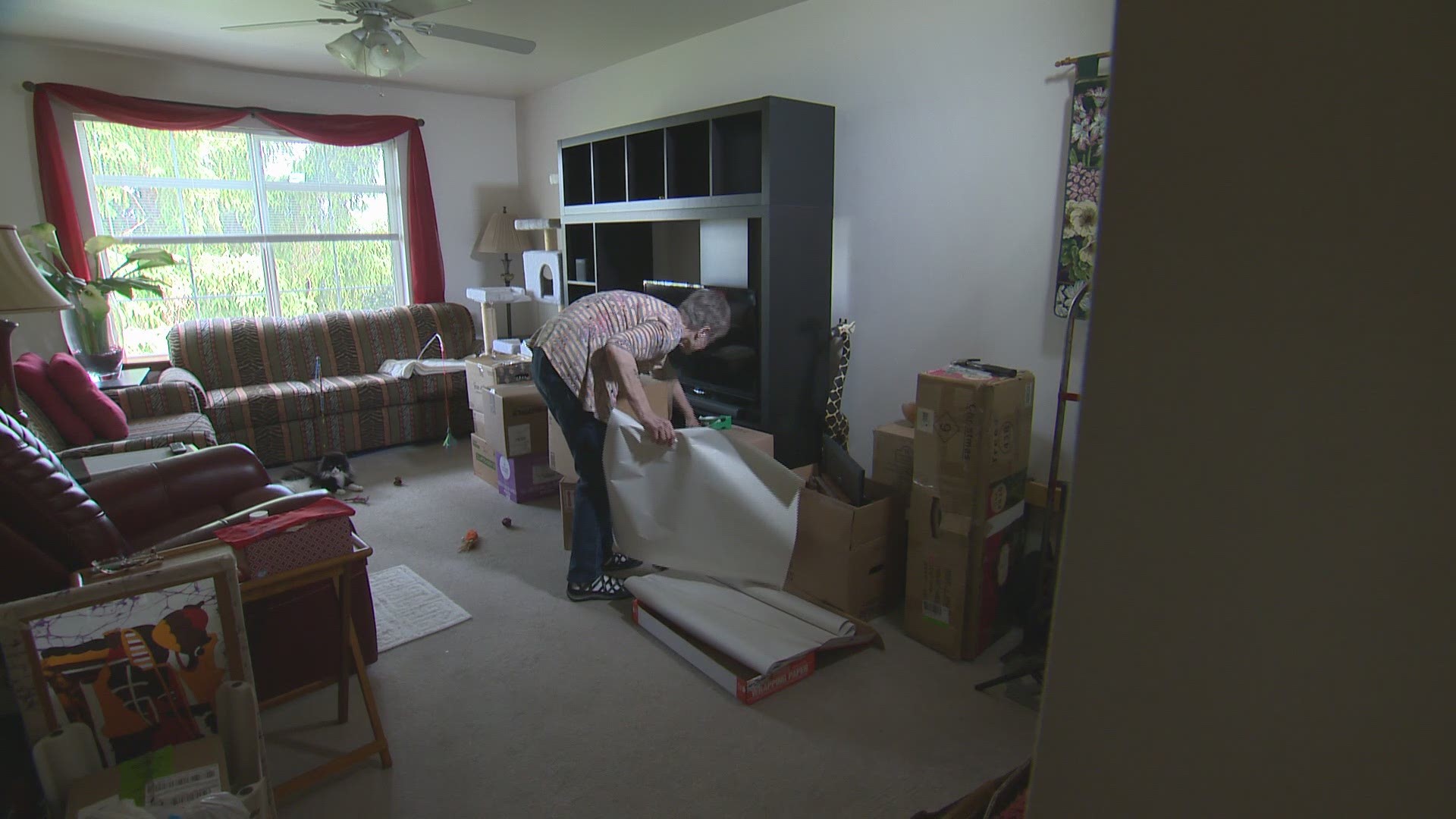 PORTLAND, Ore. — Residents at an apartment building in North Portland are still getting sick with Legionnaires’ Disease, a severe form of pneumonia or lung infection, despite efforts to fix the building's water system.

The outbreak at Rosemont Court has dragged on for more than six months, and health officials don't know why.

Jane Foreman doesn’t want to move. She loves her apartment where she has lived for more than decade, but the 71-year-old is packing up and her living room is stacked with moving boxes.

“I don’t want to be leaving but the Legionella situation really concerns me. I feel my health is at risk,” Foreman said.

The most recent case was disclosed just last week.

Since January, at least 13 residents at Rosemont Court have been diagnosed with the illness. Several residents have been hospitalized and one has died.

74-year-old Lucy Schneider died on January 2 of Legionnaires’ Disease, according to her family.

Nearly 100 seniors live in affordable housing at Rosemont Court. The apartment complex is owned by the non-profit Northwest Housing Alternatives.

On January 4, Multnomah County Health urged residents to temporarily leave and put them up in hotels after several people became ill with pneumonia-like symptoms.

Legionella, the bacteria that causes Legionnaire’s disease can form in stagnant water and then disperse through the air and be inhaled. For example, when a shower or tap is turned on.

“Every time you turn on a faucet, you wonder, ‘Am I breathing that aerosol into my lungs?’” said Foreman.

Since January, professionals have run chlorine through the water system to destroy any potential bacteria, installed a disinfection system and added filters on faucets in the apartments.

Despite all the precautions, three additional residents have gotten sick since March 17. Health officials believe the three cases may be related to some residents not using faucet filters properly, but the source of this outbreak remains a mystery.

“It can hang around in pipes anywhere that water is slowed or stagnant and it can get shaken loose in ways that we may not completely understand and then come out of somebody’s faucet or showerhead,” said Dr. Vines of Multnomah County.

Several residents have wondered if the outbreak might be connected to nearby construction activity, involving the replacement of a fire hydrant on December 10.

The Portland Water Bureau warned residents in the neighborhood to temporarily boil water, as a precaution. Water samples from that day came back clean for bacteria, according to the city.

It is not clear what role, if any, the December 10 incident may have played in the Rosemont Court outbreak.

“I don’t know that that’s a smoking gun but that is part of the timeline and part of the larger picture that we’re looking at,” explained Vines.

Tracking down the source of an outbreak and fixing the problem can take months, or even years, experts explain.

“Sometimes you get lucky and it is easy to resolve. Sometimes it drags on for a while,” explained Mark LeChevallier, who led research programs for 32 years at American Water, a multistate utility.

LeChevallier, who works as a private consultant on legionella cases, said the bacteria can resurface even after the situation appears to be under control.

The bacteria can live in biofilm, or the thin, slimy film that lines the inside of pipes.

“The bacteria can find that niche and regrow,” said LeChevallier. “The issue isn’t how bacteria got into water. It’s more about right environment in a building that allows it to grow to high levels that becomes a health risk.”

Nationwide reports of Legionnaires’ Disease have climbed in recent years.

No one is sure why, but factors could include better reporting, aging infrastructure and climate change.

Oregon has also seen an increase in Legionnaires’ Disease cases from 31 in 2018 to 55 in 2019, according to data from the Centers for Disease Control and Prevention.

There is concern among health officials that cases could really flare as buildings reopen after prolonged shutdowns during the pandemic.

“That is a real consideration with water that has been sitting stagnant,” said Vines.

In September, the CDC issued guidance for reopening buildings.

Stagnant or standing water in a plumbing system can increase the risk of Legionnaires’ Disease.

Drinking fountains, hot tubs, sinks, toilets, showers and air-conditioning systems are among common sources. It tends to flourish when temperatures are warm, water is stagnant and nutrients are plentiful, for example inside corroding pipes.

RELATED: VERIFY: Why you should worry about water in pipes before buildings reopen

Many residents at Rosemont Court feel overwhelmed by the uncertainty that has consumed their daily lives.

“We don’t want to go through life psychologically thinking there’s something to fear, something to doubt, something to be worried about,” explained Rosemont resident Leslie White.

On June 14, Northwest Housing Alternatives announced it would offer permanent relocation assistance to those living at Rosemont Court. Residents will get one-on-one support to help move, if they choose.

“About half of the residents at Rosemont Court have expressed interest in [being] permanently relocated,” said Trell Anderson, executive director of NHA in a written statement. “We will continue sharing updates with residents and will be calling on our partners to support residents through this difficult time.”

Several residents explained the pandemic has been hard enough. Now, they’ve been asked to leave their friends and the place they’ve called home.

“I’m struggling to have a quality of life,” said Rosemont resident Annette Stills. “Help us. Help us because we are suffering.”