PPS superintendent Guadalupe Guerrero talks about the duty of the state’s largest school district to provide an education for undocumented students. 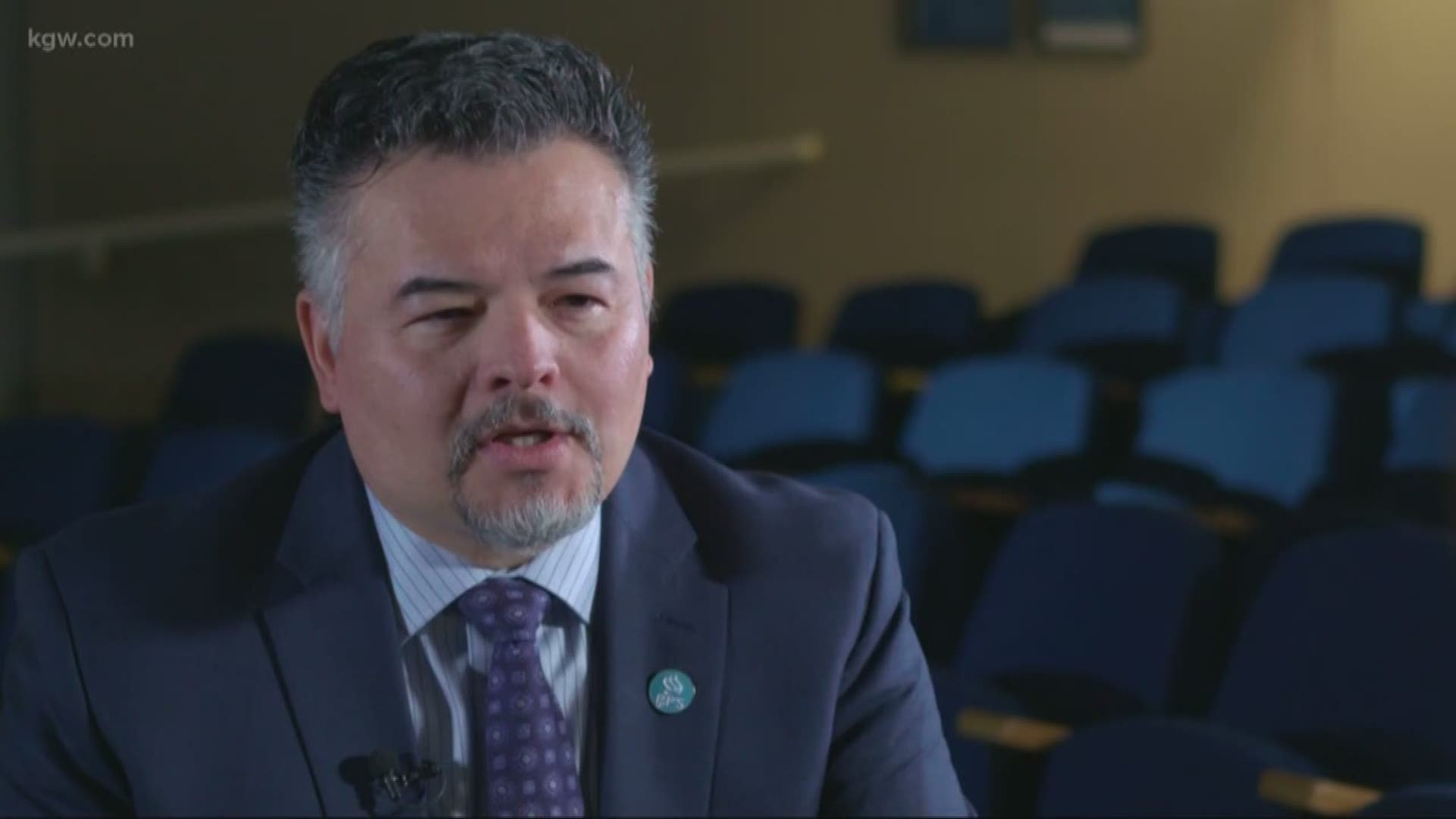 Portland Public Schools Superintendent Guadalupe Guerrero does not mince words when it comes to providing an education for undocumented students.

“We're in the business of taking care of children and youth. We're not a place where agents should come in and make arrests or apprehensions,” he said.

Guerrero sat down with KGW’s Cristin Severance to talk about her latest Inside Woodlawn episode after the elementary school was told a student, named Karen, was deported, the school’s stance on not cooperating with ICE officials and the impact of the current climate surrounding immigration on his students.

This conversation has been edited for length and clarity.

Cristin Severance: You called Karen’s story heartbreaking. How common is a story like Karen's in PPS?

Superintendent Guadalupe Guerrero: Well, unfortunately, over the last several years we've seen an escalation of these kinds of stories. I think last spring I was vocal about how our families were being impacted, such as a parent of a student. But now we're seeing examples of students themselves having to be removed from their classroom learning.

My fear is, how far is this going to go? It's parents, it's students and employees. Who's next? Is it the Nigerian physics teacher who's been with us for a decade? Is it the Muslim teacher? There's something that we must acknowledge about this climate of fear. It has a very real impact on the work in our schools.

Severance: You've been very vocal about this and the prior administration has been vocal about this. Once a student is in a school, they're safe, but so much can happen outside of school. So, what do you do? How do you help these families as superintendent?

Guerrero: One thing we do is we have very clear protocols about what level of cooperation, or lack of cooperation, we will be taking. We need to maintain a close partnership with many community-based organizations and other resources that can support our students, our families.

Severance: The district policy states if ICE were to enter any school, they'd have to notify you in person. Talk about why that is a policy and has that ever happened here?

Guerrero: It is true if an agent were to present themselves at the front door of our school communities, they have to contact my office and they will have a response ready for them. Schools, like churches, should be sanctuaries. We're in the business of taking care of children and youth. We're not a place where agents should come in and make arrests or apprehensions. We're never going to be accomplices in those cases ever, at least not under my watch.

Severance: Woodlawn has said if an ICE official comes to the door, they would go into lockdown. Why is that protocol for you schools?

Guerrero: A primary responsibility we have, and I think every family in Portland would expect, is that we keep a safe school environment. We're not going to have agents coming in and disrupting that peace within our schools. We want everybody focused on learning. They're going to have to do their business elsewhere.

Guerrero: We do not. As a school district we don’t collect track, monitor anybody's immigration status. We are not in the business of checking those things. You don't see that in any documentation that we request families provide. We're going to serve every child that comes through our doors. That's just a matter of practice for us.

Severance: A lot of critics say having undocumented students in a school system is too much of a financial burden. What do you say to that?

Guerrero: I'm a lifelong educator so I'm going to serve any child that walks through the door, whether I'm a teacher or during my time as a principal or now as a school superintendent. I know what's a drain on our country: it's ignorance. So, I can't think of a better antidote than making sure everybody actually has a well-rounded education. It's important that we have an educated populace. I think what's lacking is civic discourse. I think every dollar we invest in children and youth pays dividends in our ability to be a strong community, be a strong state, be a strong country.

When not all students are afforded an equitable, high quality educational opportunity, we see the effects of that. We can talk about the school to prison pipeline. We can talk about what happens when public education educators don't have the supports readily available to offer their students, especially diverse students.

When we don't make investments in all students, in every student, we pay the price later.

Severance: You know, I'm not going to be breaking any new ground with you on this, but a lot of the comments after the story were, ‘Karen's dad broke the law and tell the kids in her class that's why she's not here anymore.’ What do you say to that?

Guerrero: I think we want to have a response to that's developmentally appropriate. I think what we saw in your segment is the struggle that her teacher had in trying to describe why one of their classmates is no longer sitting at her desk. And I think he shared that she's likely going to a new school. And I really hope that that's true because what I would not want is for any child not to have the opportunity to learn.

So for me, this isn't a story about a child having done something criminal. We have many examples of this, of families, who have gone through extreme measures to provide an opportunity for their children, which I think any parent would be willing to take a risk for. I don't consider it a criminal act, that they want their child to be able to read and write.

RELATED: Fear and sadness at Woodlawn when the school was told a student was deported | Inside Woodlawn Ep. 5

Severance: Why is this so personal for you?

Guerrero: It's personal for a lot of different reasons. Part of it is visible as to why it might be personal for me. But it's also been 25-plus years of living and working embedded in communities of color. One of the reasons that I became an educator is to make sure all children – every single student –  some who oftentimes look like me, have the same kind of equal opportunity that is public education's promise. It’s hard to be an effective educational leader if you're silent on issues that are affecting your ability to serve your core mission. If my job is to keep my students safe and bad policies are impacting on that or outside forces are infringing on the school environment, I think any family would expect us to address it.

Not only is it sort of a function of my role, but it also strikes sort of a deep personal belief about helping to support children and young adults grow into critical thinkers who can make this, I believe, a better world. And because sitting in our kindergarten classrooms could be that next engineer that makes life better for all of us, or inventor, or president, or mayor or teacher. And I just don't think we should be robbing children of that opportunity.

Severance: This is such a polarizing issue. I mean, I saw it in the comments, I've seen it online. Just what do you say to critics about this, that schools should not be sanctuary districts?

Guerrero: I'm so appreciative that you've been able to capture the story of one school because I think it has, emerged for folks as a visual description, hearing those stories. I would challenge anybody not to be moved by the episode with Karen or any of the others because it's part of our day-to-day here as a school system. That's one school. We have 80 others and everyday stories like that are taking place.

Our responsibility, our privilege is to make sure every day is better than the last for each of our children and young adults that we serve. I think certainly people fall along partisan lines and believe that schools should not be taking a political stance. Trust me, we would prefer not to. But a superintendent shouldn't be silent on developing legislation. A superintendent shouldn't be silent on his or her advocacy for resources or things that will benefit our students. And certainly, there's an expectation that we keep safe learning environments.

I think this is an example of politics invading our classroom. It's affecting the climate and the safety. It's affecting our ability to deliver educational services as an employer and it's certainly heightening the anxiety that current students, current employees, current families are feeling. And I'm just wondering, when does that get better? Because we seem to be headed down a journey where it appears to be getting worse. And at some point, it seems like greater and greater numbers of people, of students, of the adults who work in our public education system are going to be impacted. And I think that goes to my question, who’s next?