More than 20 Portland businesses have been hit with fake, computer generated one-star reviews on Google for months. 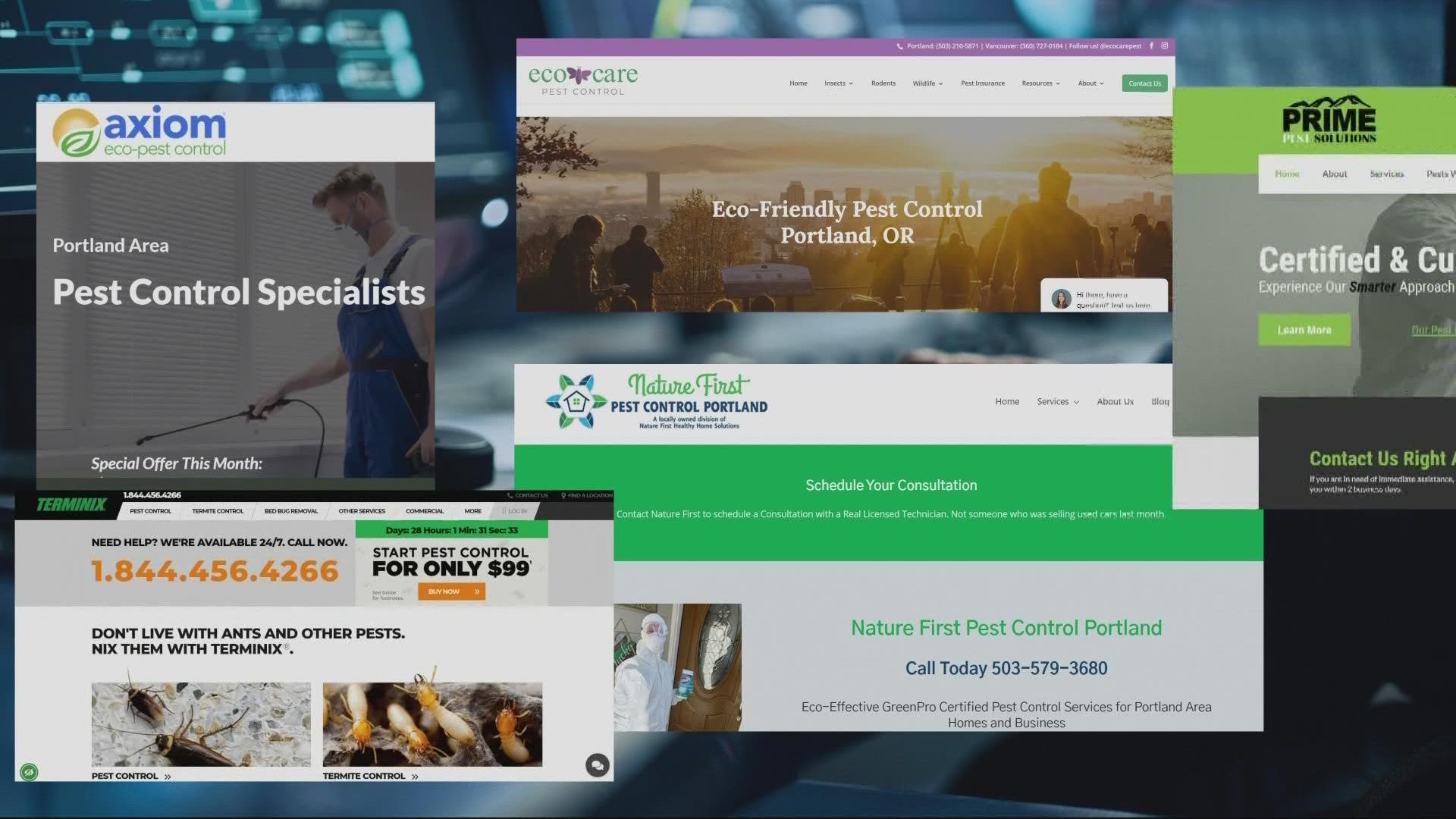 “We’ve truced. I refuse to turn any of his customers,” said Burton who owns Prime Pest Solutions in Beaverton.

The small business owners are competitors in the local pest control industry but have teamed up to try and stop another kind of pest — an online one targeting them with fake, one-star Google reviews.

“We want to focus on our businesses, living our lives and not use every other waking moment trying to get this resolved,” said Funrue who owns Banish Pest Control in Beaverton.

KGW Investigates learned of at least twenty pest control companies in the Portland metro area that have received dozens of fake one-star reviews on their Google business profiles over the last year.

The reviews were not left by unhappy customers with a gripe — they're fake, computer-generated and designed to hurt a company’s reputation.

The fake reviews have lowered the companies' Google ratings, cost them thousands of dollars in lost revenue and tarnished the reliability of the rating system for consumers.

“It’s dropped me down from five stars to 3.6. So, nobody's looking at a 3.6 rated company period and who knows what it did to my revenue,” said David Scott who owns Best Pest Control in Beaverton.

“My searches are down, the hits on my website are down. My phone calls are down drastically from a year ago,” said Waltman.

Burton, who runs Prime Pest Solutions with his wife, has been fighting this fake review problem for months. He’s contacted Google, the Federal Trade Commission (FTC), the Oregon Department of Justice and several law firms but has not received much help.

Credit: KGW Staff
Burton reached out to a number of agencies to get control of the problem but has not received much help.

“There were certain days where I'd just call every single government entity that I could think of that would potentially be in charge of handling this,” said Burton.

Burton said he and the other business owners know these reviews are not from unhappy customers.

Pest control businesses must keep service records for all their clients based on rules by the Department of Agriculture.

“Of these one-star reviews, not one of them is a customer,” said Burton.

Burton has an idea who might be behind the fake reviews. Last year, he had an employee quit, file for unemployment and start his own pest control company in Oregon.

Burton said the one-star reviews really ramped up after he denied the former employee’s unemployment claim.

Burton contacted the former employee, who denied it and then filed a report with the Beaverton Police Department, but nothing stopped the reviews.

Burton didn’t know it at the time but Funrue’s business was also getting hit with fake reviews.

“I just felt absolutely helpless when they started rolling in, especially because I didn't know who it was or where they were coming from,” said Burton.

Both men hired Jason Brown at Review Fraud, a company that tries to help business owners get fake reviews off their profiles.

Google is so big that simply flagging a fake review often is not enough to get it removed, even if the reviews are clearly computer-generated and not a real customer.

Funrue said the bogus reviews are easy to spot if you know what to look for.

“The grammar is not consistent or correct, the punctuation is wrong,” said Funrue.

“This case in Portland, it was just the most interesting one I've seen because even when we identified the culprit it's still not stopping,” said Brown.

Brown said all his research and evidence show Burton’s former employee, who now owns his own pest control company, is the person behind the targeted attack.

Brown said the fake reviews appear to be coming from a company overseas — a company that someone would hire to leave negative reviews targeting competitors.

All seven business owners said Google should do more to stop these fake reviews.

“I can almost handle the kid who's doing this, what I can't handle is Google's indifference to enabling it and without a doubt, they are enabling it. They could do something about it. And I get it, they're so huge. They just don't have time to tinker with 18 companies in Portland, but they've got policies in place that are just a joke,” said Tom Dieringer of All Pest Control Company.

Brown said Google did remove some of the fake reviews for several businesses a few months ago. During that same time period, Google also removed 75 fake five-star reviews from the competitor's business profile. But as quickly as the fake reviews were taken down, new fake reviews replaced the old ones.

Eight of the businesses owners also filed complaints with the Federal Trade Commission but no action has been taken yet.

Burton filed a lawsuit against his former employee, who denied doing this in his written response, but the reviews haven’t stopped.

The former employee told KGW in an email that this is a rumor and there is no proof that he is responsible.

“They're just all at their wit's end because it's never-ending and Google is just not doing enough to come in and stop it,” said Brown.

Brown said fake reviews mess things up for consumers who rely on Google when choosing a business or service.

Google told KGW Investigates it employ teams of trained operators and analysts, as well as, automated systems that use hundreds of cues to detect fake reviews.

Google said in a statement:

“We invest significantly in building technologies and instituting practices that help people find reliable information on Google. Our policies clearly state reviews must be based on real experiences and information, and we closely monitor 24/7 for fraudulent content, using a combination of people and technology. Staying a step ahead of scammers is a constant battle, and our teams will continue to investigate the situation and remove policy-violating content.”

More than 610,000 user accounts were disabled after Google detected and investigated suspicious or policy-violating behavior.

According to Google, the company stopped more than 3 million attempts by bad actors to verify business profiles on Google that did not belong to them.

Google told KGW it has several ways for users to flag reviews that may be misleading or false:

The day after KGW Investigates contacted Google, dozens of the fake reviews were removed from the businesses impacted but not all of them.

The Beaverton business owners feel like this is a never-ending problem that no one wants to fix.

“We’re looking for a resolution and honestly we just want it to stop,” said Funrue.

More from KGW Investigates: The impact of a homeless camp