COVID-19 contact tracing ‘was a complete failure’ after outbreak at KinderCare, family says 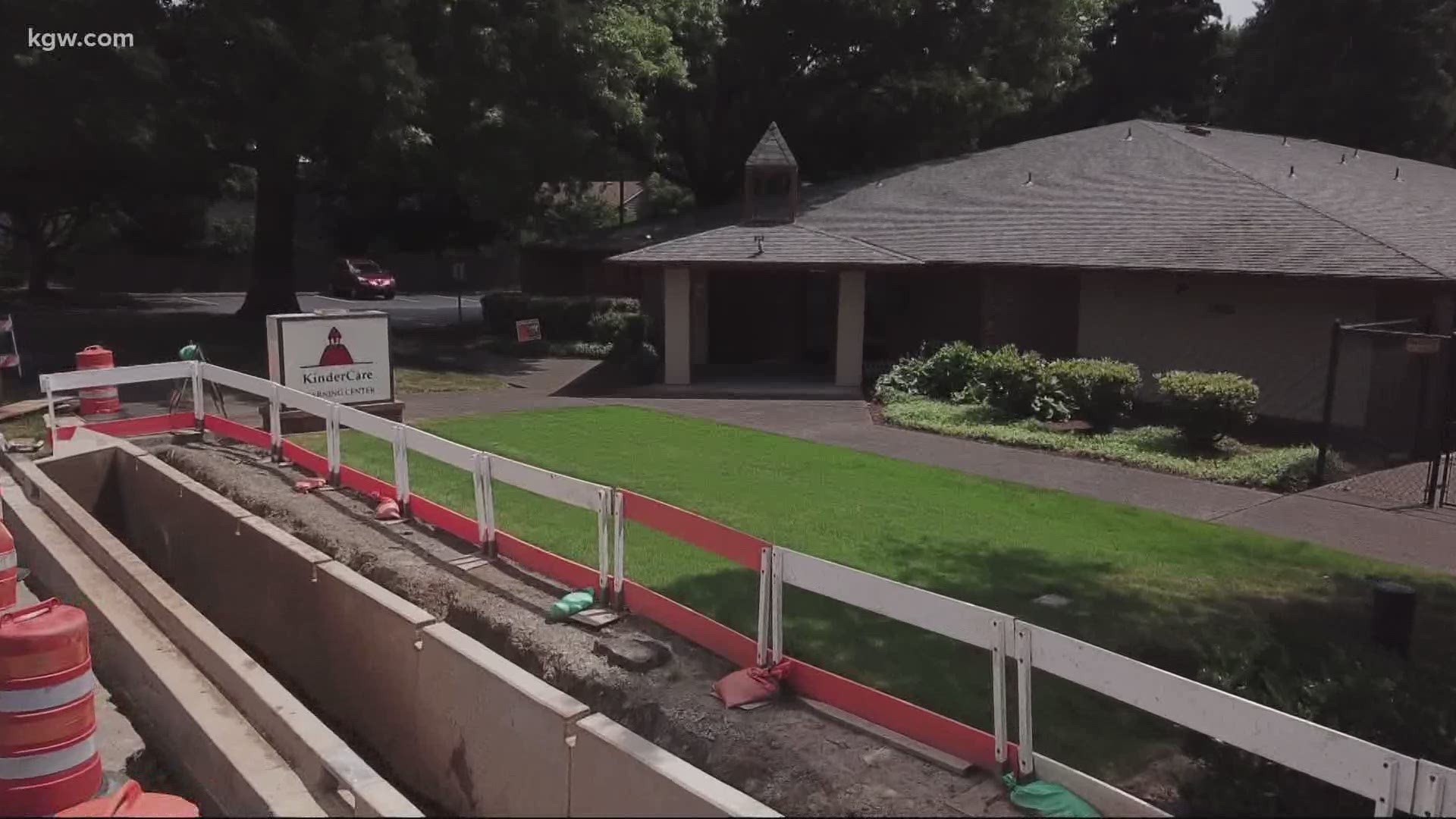 LAKE OSWEGO, Oregon — The first COVID-19 outbreak at a child care facility in Oregon happened in June at the KinderCare in the Lake Grove neighborhood of Lake Oswego. According to the Oregon Health Authority (OHA), 29 people tested positive for the coronavirus.

The outbreak triggered a response from county health officials, including contact tracing for people exposed at the day care. Internal emails, public data from the state and interviews with parents show a better timeline of what happened and highlight what parents call a poor job by the contact tracers.

County health department officials said they reacted as quickly as possible given the delay in which they received pertinent information from KinderCare, such as a contact list.

“I think there are several failures on the health department and OHA’s part," said Lauren Dahl, a mother of four who sent her youngest child to the KinderCare facility in Lake Grove. "I think that people need to know this is happening in our community. The contact tracing was a complete failure.”

Dahl and her husband have been working from home since March.

“It's been difficult, challenging in ways I never thought we would experience. My husband and I are both working from home and we have four children, ages 1 through 9,” said Dahl.

Kindercare is one 2,950 child care facilities that was granted emergency child care status from the state, which allows them to be open during the pandemic. Coronavirus protocols at the Lake Grove KinderCare included masks, temperature checks, small class sizes, hand sanitizer, increased hand-washing and increased cleaning.

“We felt like obviously we weren't completely protected from this," said Dahl. "I don't think anyone is. But we felt like they were doing as good of a job as they could, given the circumstances."

A KinderCare email said, in part, “I want to let you know that a couple of teachers have been out due to having a fever. It is important to us that all staff follow the new sick policy and stay home for 72 hours and must be fever free to return. It is important to note that these staff do not have shortness of breath or coughing but have decided to be tested (for COVID-19) just to be sure. It’s the best way we can ensure that everyone is in the clear. At this time no students in our school have had any symptoms.”

KinderCare administrators followed up with an email on Monday, June 15, alerting parents that Clackamas County had opened a case for the day care.

Parents were sent another email on the evening of Wednesday, June 17, that said, in part, “I finally received a call from our public health caseworker today! He is working closely with contact tracers and epidemiologists and they have decided that our whole school is eligible for contact tracing.”

RELATED: What is contact tracing, and how does it work with COVID-19?

Health officials said a rapid response is critical with contact tracing, so people don’t continue to unknowingly spread the virus.

“Time is of the essence, for sure, when it comes to getting in touch with a person who's had that exposure and getting them the information they need to keep themselves healthy and keep others around them healthy,” said Jonathan Modie, lead communications officer for the Oregon Health Authority.

The OHA came up with its own benchmark to measure the success of contact tracing. Investigators must contact someone who tested positive or has been exposed to a positive case within 24 hours at least 95% of the time. The OHA said it is meeting that benchmark, although an “attempted contact," a missed phone call or voicemail, is counted in that metric.

The Dahls live in Washington County, so contact tracers from that county were responsible for their case even though the outbreak happened at a day care in Clackamas County. Dahl said the Washington County Health Department contact tracer didn’t get a hold of her family until June 23, nine days after they first learned of the positive case at KinderCare.

“He kind of stumbled his way through the questions and didn't really seem to know what exactly he was doing,” said Dahl.

The contact tracer sent an email with a link to an Oregon Health Authority symptom tracker to Dahls on June 26, three days after the initial call. The Dahls were supposed to use the form to record their symptoms every day but at that point, the family was nearly done with their quarantine.

“I feel like on Monday morning, June 15, the day after we were notified that this was going on, every single person in the center should have been contacted. I know that our center director at KinderCare specifically submitted a floor plan of the center along with an hour-by-hour documentation of which staff was in which room with which children. They have it down to that,” said Dahl.

However, Clackamas County health officials told KGW they didn’t receive a contact list from KinderCare until seven days after the first positive test.

A spokeswoman said in an email, “Following receiving the list, Clackamas County switched state databases that aid in contact tracing notification to the counties. The contacts from KinderCare did not transfer to the new database until about four days after we received the contact list to KinderCare. The 24-hour clock for contact notification begins when the information is placed in the database. So, in this case, there was no delay in contact tracing as it relates to the KinderCare outbreak.”

"While we met the 24-hour timeline for contact, it is ideal to have contact information available immediately following an outbreak," said Kimberly Dinwiddie-Webb. 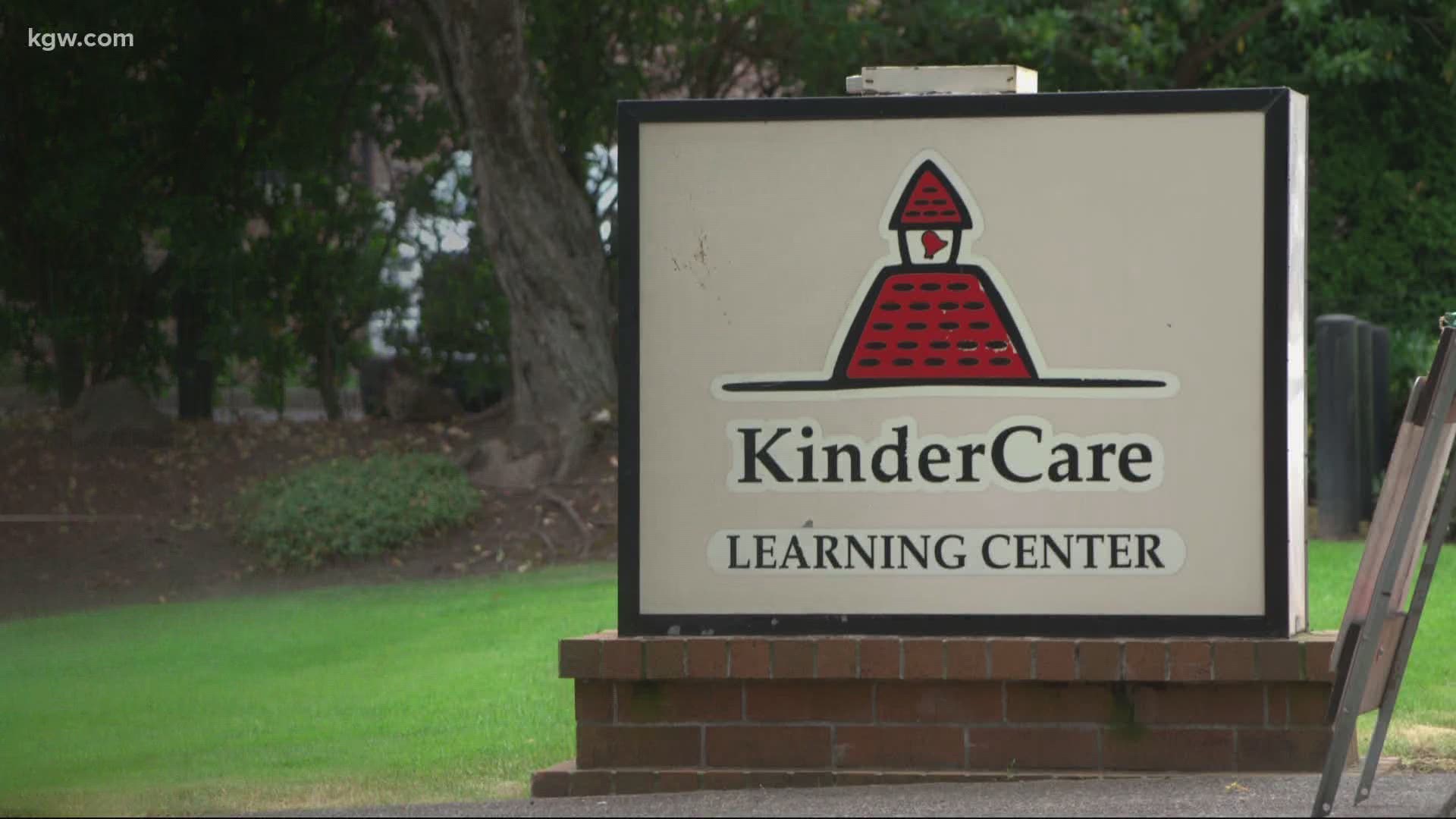 KGW reached out to the Washington County Health Department who said in an email:

"Washington County reaches out to contacts within 24 hours after they have been named or transferred from another county into the state database. Timely notification depends on all community members responding to calls from public health and naming their close contacts so that active monitoring can be initiated. If you have been notified by an employer, worksite, or another facility that you may have been exposed to COVID-19 we ask that you do your part and self-quarantine.

"In workplace outbreaks public health requests, a list from the workplace of correct names, phone numbers, and addresses of people who may have been exposed.  Once received, the names are transferred to each county jurisdiction where the contact resides."

The Dahls completed their quarantine and never had symptoms.

KinderCare would not do an on-camera interview or provide a statement for this story.

The Lake Grove KinderCare is now back open with all the protocols as before and new safety measures, including parents being required to wear masks at pick-up and drop-off.

Dahl feels safe putting her child back in KinderCare but is seriously considering homeschooling in the fall.

“We keep hearing contact tracing and testing is what’s going to get our kids back in the fall. So, it's been very frustrating and I, again, I'm not hopeful,” said Dahl.

Modie said if people have a bad experience, they should contact their public health department and the Oregon Health Authority.

Have you been contacted by a contact tracer? What was your experience? Email us at callcristin@kgw.com.