New regulations meant to stem opioid abuse and addiction are threatening chronic pain patients' access to drugs, leaving them terrified of losing the one thing that protects them from a life of debilitating pain. 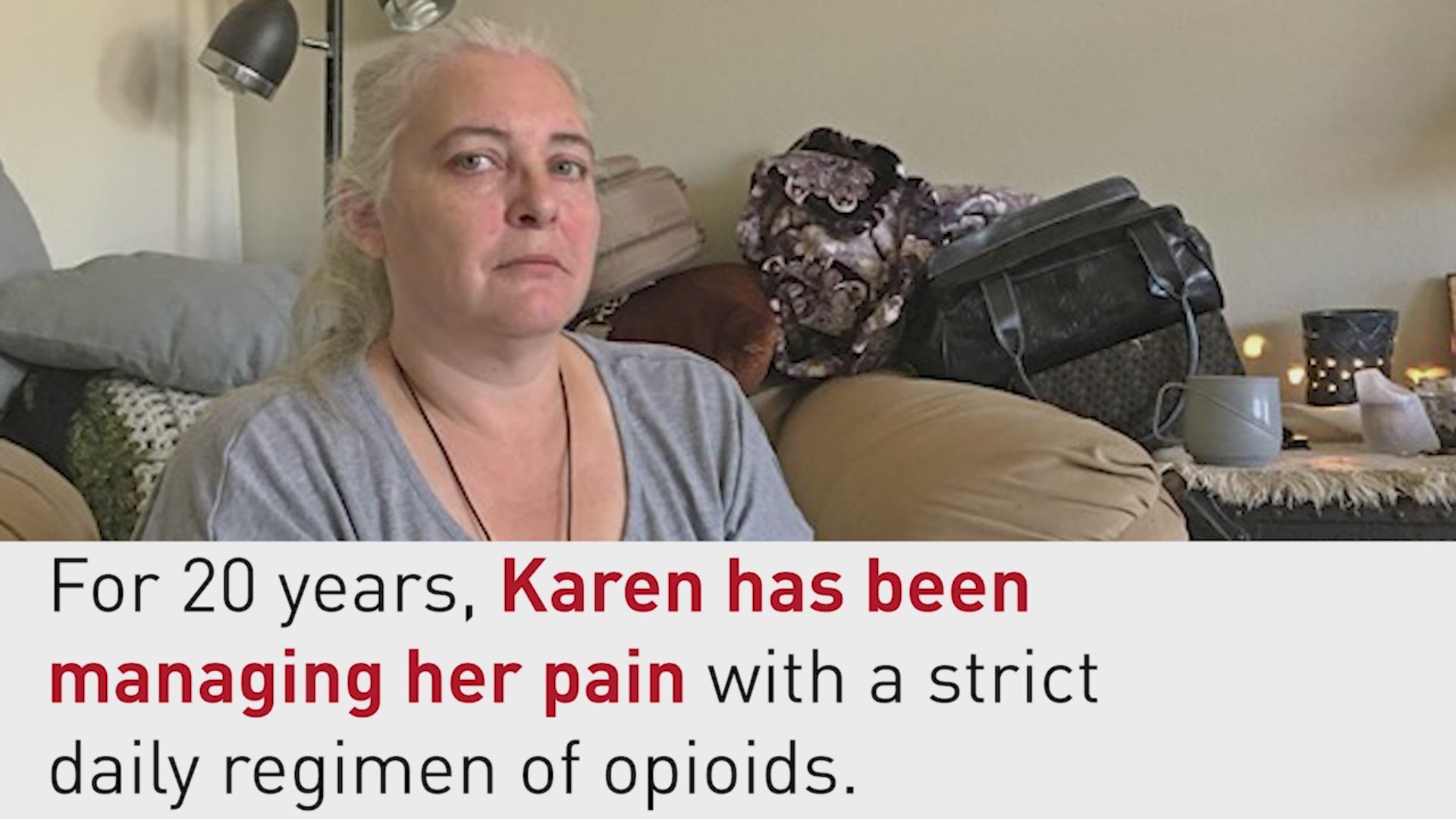 “My nerve damage causes pain, and where the scar tissue wraps around the spinal cord it’s like sandpaper,” said 53-year-old Karen Begeal, who lives in Vancouver, Wash. “Every time I move, it gets worse. I can look fine to you right now. I can walk in the store for a few minutes but if I’m not leaning on a cart, after just a few minutes I get to where I can hardly stand up.”

Begeal says this while sitting in a plush beige easy chair, surrounded by a dozen personal items. Her purse, computer, briefcase, pillow, blanket, sweater, cane, pens and paper, and a cup of water are all within arm’s reach. That’s by design, since Begeal’s chronic, debilitating back pain keeps her in the chair for most of her day, every single day.

For 20 years, Begeal has been managing her pain with a strict daily regimen of opioids.

Karen Begeal in her Vancouver home&nbsp;

Opioid medication can be extremely addicting and deadly. Since 1999, prescription opioids have contributed to the deaths of nearly 200,000 people in the U.S., according to the Centers for Disease Control.

State and federal regulators are now cracking down on how doctors prescribe opioids, in hopes of stemming the deadly national epidemic. Doctors have been told to cut back on the strength and number of opioid prescriptions they write, leaving fewer people who are at risk of overdose or death.

“To live without pain medication – I wouldn’t want to think about it,” Begeal said.

In the early 1990s, Karen Begeal ruptured two disks in her back while she was moving boxes at her job at an insurance company. She managed the pain with physical therapy and was retrained as a computer systems engineer. She loved installing and rebuilding computers.

“I felt it go. The guy sitting next to the desk I was working at heard it pop,” she said.

Doctors discovered extensive scar tissue in Begeal’s back, stemming from her original injury. She has since also been diagnosed with fibromyalgia and a genetic condition called Ehlers-Danlos Syndrome, where her body is unable to properly build connective tissue.

“You’re never going to work again,” she remembers her doctors telling her. “I was allowed up two hours a day – sitting, standing, walking, everything. That was out of bed.”

Begeal was suddenly faced with a lifetime of limited movement and chronic pain.

She underwent her first of multiple back surgeries and her doctors prescribed a regimen of Vicodin, the name brand for hydrocodone, which is an opiate painkiller mixed with Tylenol.

Begeal had to take at least one Vicodin every four hours.

“It was this constant roller coaster with pain meds. You take it and it has to have time to ramp up. It’s OK for a little bit, and then it ramps down, then it’s time for the next dose,” she said.

Since then she’s been prescribed several opioid medications, including oxycontin and a fentanyl patch, the latter of which left her sick for days.

Begeal also had a doctor stop prescribing her medication without notice, leaving her scrambling to find a new physician. At one point, she was driving from Vancouver to Salem monthly for a doctor who would abide by her long-term opioid plan.

Now she has a physician in Vancouver who prescribes what Begeal says is the lowest dose she can handle: two 100-milligram extended-release doses of morphine each day and a few Percocet pills for days when she does something active and her pain is too much to manage.

“I have a condition,” she explained. “I manage my pain condition with my pain meds, and limiting what I do and how I do it, and taking care of myself as best I can. Because there’s no changing it.”

In a perfect world, Begeal would love to be off pain medication but her condition requires a constant stream of opioids for her to have any quality of life.

Begeal says the pain is always simmering and the rare times she forgets to take a dose, her pain and early withdrawal symptoms shock her out of sleep.

“My body is addicted, not my mind,” she said. “I learned a saying long ago: ‘The drug addict takes drugs to escape life. A pain patient takes drugs to return to life.’ We’re not looking to escape. We want to participate.”

Right now, Begeal’s doctor continues to prescribe her the medication she needs. But new guidelines mean he could be punished for the prescriptions he’s writing.

Opioid overdoses have quadrupled over the last two decades. Drug overdoses are now the leading cause of death for Americans under the age of 50. Many overdoses are from opioids including heroin, fentanyl and prescription painkillers.

That led state and federal administrators to take drastic action. In March 2016, the Centers for Disease Control issued stricter guidelines for doctors who prescribe opioids. Among them: Nonopioid therapy such as physical therapy is preferred for chronic pain; when opioids are used, the lowest effective dosage should be prescribed; and providers should always exercise caution when prescribing opioids.

The guidelines were widely adopted by states, including Oregon and Washington. In the summer of 2017, the CDC issued a buoyant update: Opioid prescriptions nationwide had fallen 22 percent from 2010 to 2015, before the new guidelines were adopted. With the tougher recommendations, they were expected to fall even further.

In Oregon, prescriptions also fell by 22 percent between 2010 and 2015 – from 1186 morphine milligram equivalents per person each year to 972 MME (one milligram of hydrocodone equals one MME; a 5-mg hydrocodone pill is five MME). The biggest drops were generally in metropolitan areas, while rural counties still saw high rates of opioid prescribing. 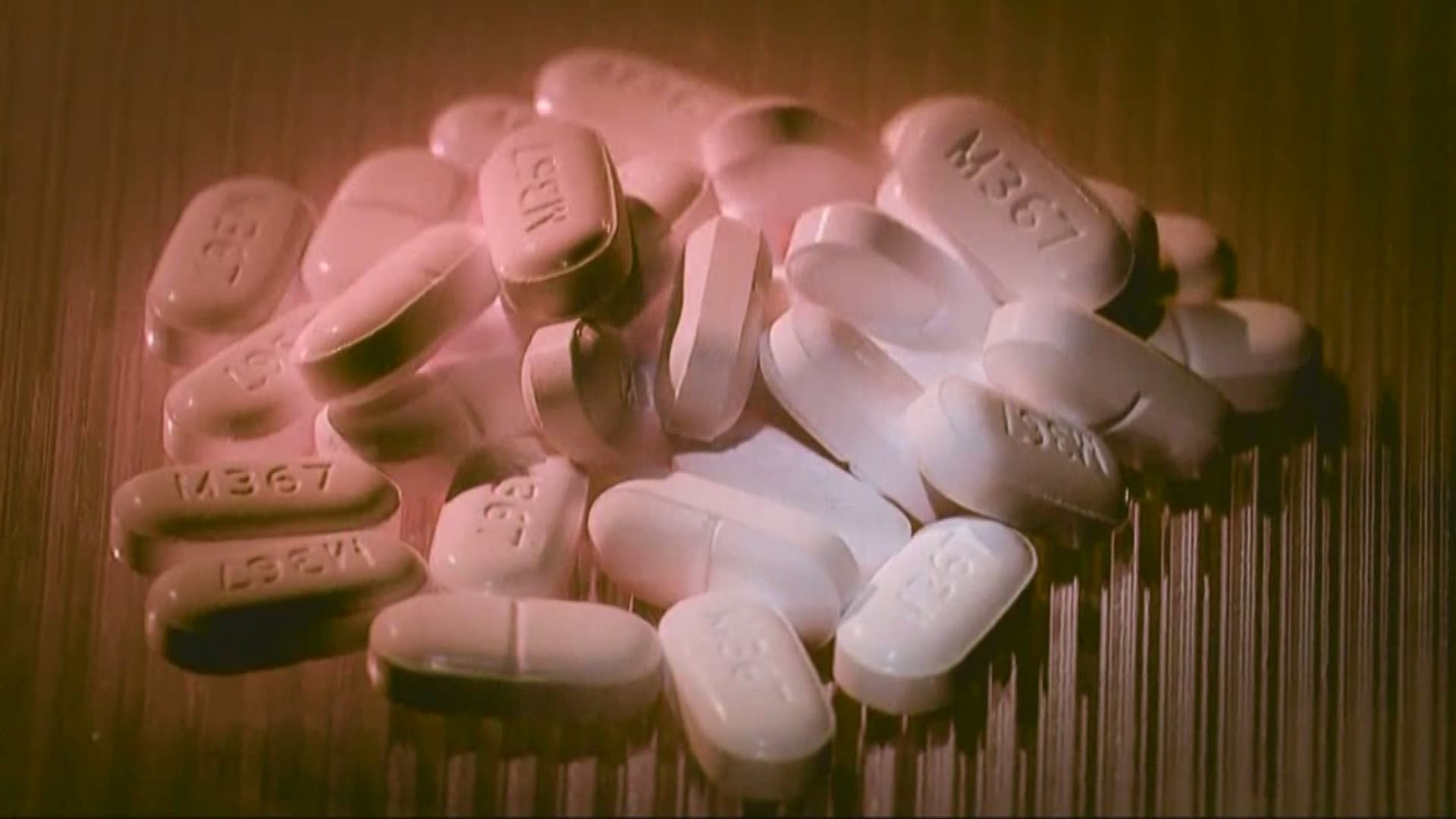 The Oregon Health Authority does not yet know how many prescription opioid deaths or hospitalizations have occurred since the new prescribing guidelines went into effect.

The prescribing guidelines issued by the CDC not only urge doctors to use alternative pain therapies before opioid medications, but reduce the opioid prescriptions for all patients:

The problem with that is, due to increased tolerance over time, many chronic pain patients take far more than 90 MME of opioids per day.

For Begeal, who currently takes 200 mg of morphine each day, the CDC guidelines would cut her daily dose by more than half.

Nicole Krishnaswami, operations and policy analyst for the Oregon Medical Board, explains that the guidelines are not law but the OMB does want physicians to get as close to those guidelines as possible and doctors who prescribe more than the guidelines put themselves at risk of legal action.

“A physician certainly doesn’t want to have a patient overdose on opioids then come to the attention of the board,” Krishnaswami said. “We have the authority to discipline our physician licensees based on providing care that’s inappropriate. It would be possible for the physician to think they are going to be investigated down the road.”

The Oregon Medical Association has spoken out against legal action for overprescribing.

“We do not believe criminalizing prescription writing achieves better patient care,” Mark Bonanno, general counsel for the Oregon Medical Association, wrote in a memo to the Oregon health care committee in February. “In fact, if practitioners fear prosecution for writing prescriptions for opioids or opiates, we expect the pendulum for the public health issue of properly treating pain will swing all the way back to under-treatment of pain."

Bonanno was speaking out against a bill that would have criminalized improperly prescribed opioids and reduced opioid prescriptions to a 7-day supply. A stripped-down version of the bill, without the criminalization or 7-day rule, passed.

Begeal knows at any point her doctor’s office or the state regulatory board could crack down on her prescriptions. She called that prospect “terrifying.”

“I’m in pain all the time. It doesn’t take the pain away,” Begeal said of her opioids. “It just makes it so it’s not putting me in a dark tunnel. Because when the pain comes and it’s really strong, I literally go to bed. I go lay down. I can’t stay up. I can’t focus on anything. I can’t carry on a conversation, it hurts so bad.”

Medical marijuana not an option for many pain patients

Under the new CDC guidelines, opioid pain patients are urged to try alternate therapies such as physical therapy, massage and psychotherapy. One option that is not available to many pain patients, however, is medical marijuana.

Despite its legality in Oregon and Washington, most doctors will not prescribe marijuana to opioid patients, in part because there is no clear recommendation from the medical boards.

The Oregon Medical Board tells doctors to refer to the state’s opioid prescribing guidelines for guidance on marijuana prescribing, but the opioid guidelines do not contain any recommendations for marijuana. Instead, they refer doctors to Oregon’s marijuana guidelines.

The marijuana guidelines don’t state what doctors of opioid patients should do, either. Instead, they refer doctors to the opioid guidelines, creating a back-and-forth with no answers.

Another issue with medical marijuana is that chronic pain patients who are prescribed opioids are required to sign “treatment agreements,” also called pain contracts. The patients agree not to take drugs not prescribed by their doctors, including marijuana, and they are often subject to random drug screens. If they violate their pain contracts, they risk losing access to opioids completely.

“We hear this concern [from patients]. It’s a little bit of a catch,” Krishnaswami said. “It makes physicians uncomfortable because they don’t know how the two are going to interact and how much the patient could be using marijuana. Some physicians do have a rule in their office that their chronic pain patients may not use marijuana if they’re on opioids.”

Krishnaswami referenced a report on cannabis from the National Academies of Sciences, Engineering and Medicine on marijuana research.

“They don’t directly address the concurrent use of marijuana and opioids, but they do conclude that there are some increased risks to consider when a patient uses marijuana,” she said.

The report also determined there is substantial evidence that cannabis is effective for the treatment of chronic pain.

Begeal says she would love to try cannabis for pain, especially the “breakthrough” pain she now treats with quick-acting Percocet pills.

“From what I’ve read and what I understand I think it would help,” she said.

Begeal recalled an evening in early October when she and her husband went out to dinner and window shopped.

“Just that little bit of walking and I was in extreme agony. By the time we got home I was in so much pain I took Flexeril [a muscle relaxant] Percoset and Ibuprofen, and it still hurt so bad I wanted to cry. If medical marijuana had been a choice, it would have acted faster. I don’t know if it would have worked better – I don’t have that as an option.”

While Begeal says marijuana might help her pain, she would never put her opioids in jeopardy.

“The biggest thing is the fear of the opioids being taken away in a snap. They’re what gave me the ability to go out in the first place,” she said.

Despite issues the new guidelines create for chronic pain patients, state regulators say it’s worth it to save lives from opioid drug overdoses.

“Obviously it’s a very troubling situation [for chronic pain patients] and devastating in their lives. Our mission as a state agency is patient safety, so that frames everything we do,” Krisnaswami said. “The guidelines are to ensure people are not given lethal doses of opioids or create addiction to opioids.”