Saul Loeza is being held in ICE's Tacoma Northwest Detention Center after his arrest mid-February in Woodburn. Michelle Loeza said her father has a job, pays his taxes, and is not a criminal. 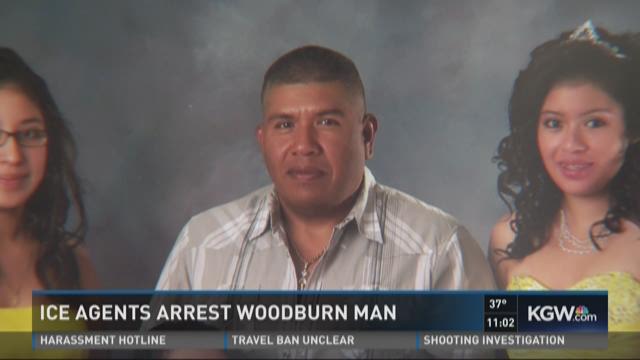 That fear kicked in on Thursday morning, when an Immigration and Customs Enforcement agent pulled over her father, Saul Loeza on Front Street in Woodburn as he was on his way to work.

Michelle said family friends called to say they thought they saw Loeza's car on the side of the road.

"Everything is inside his car. Everything was untouched," said Michelle Loeza.

She said the agent was looking for Loeza's brother who, Michelle Loeza said, had a DUII more than 10 years ago. Her father identified himself and told the agent his brother was in Mexico.

<p>Saul Loeza was picked up by ICE agents in Woodburn and taken to a detention center in Tacoma. The father of two, he has lived in the U.S. for 30 years. (KGW courtesy of the Loeza family)</p>

Still, he was taken into custody and taken to a detention facility in Tacoma, Washington. Michelle said her dad is an undocumented immigrant who has been in the U.S. for about 30 years working and paying his taxes. But now, there's a lot of uncertainty for the family.

At this point, Michelle Loeza said she's scared, and not only for her dad. She has other undocumented friends and family.

"If they are taken away, I don't know when I'm going to see them again. My dad, I don't know if he's going to be with us next week, next month or never," she said.

Immigration and Customs Enforcement stepped up their efforts nationwide.

"The focus of these targeted enforcement operations is consistent with the routine, targeted arrests carried out by ICE's fugitive operations teams on a daily basis," wrote Gillian M. Christensen in a statement, the Acting Press Secretary for the Department of Homeland Security.

"The president has been clear in saying that DHS should be focused on removing individuals who pose a threat to public safety, who have been charged with criminal offenses, who have committed multiple immigration violations or who have been deported and re-entered the country illegally," Christensen continued in another portion of the statement.

Hundreds of undocumented immigrants were arrested this past week across the nation in what authorities insist are "routine" law enforcement operations.

It's bolstering the hopes of many who voted for President Trump because of his tough stance on immigration.

But for many others, there's growing fear of family separation. More than 16 million people in the U.S. live in a household with at least one undocumented immigrant.

Meantime, Loeza's family maintains he is a contributing member of society and is not a criminal.

"He's so confused. He's very anxious. He just wants to be with us right now," said Michelle Loeza.

Loeza's family saw him on Saturday in Tacoma, but they say it's unclear when his case will be addressed and when they will see him next.

To help pay for legal fees, they have set up a GoFundMe account.