PORTLAND, Ore. — Sitting just a few blocks off bustling Southeast Hawthorne and 48th Avenue, the two-story bungalow had a great location. It just needed some work. 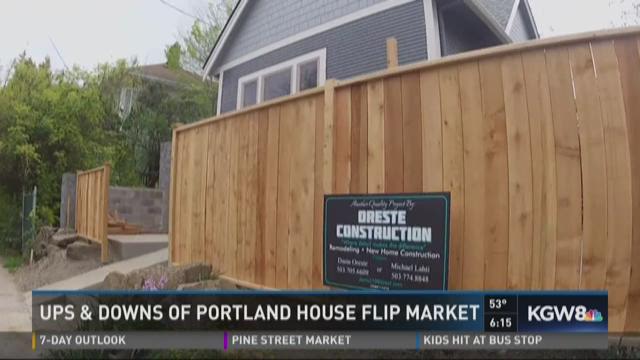 PORTLAND, Ore. — Sitting just a few blocks off bustling Southeast Hawthorne and 48th Avenue, the two-story bungalow had a great location. It just needed some work.

After a full remodel, including a new kitchen, plumbing, paint and windows, it went back on the market. Less than one year later, the home sold for nearly double the original sales price, going for $675,000.

This home is example of why Portland’s Richmond neighborhood is one of the hottest in the country for flipped homes. A “flip” is a home that is bought and sold within one year for a profit.

Last year, ten homes were flipped in the Richmond neighborhood with an average gain of $260,000.

“It’s one of the premier inner Southeast neighborhoods and people are willing to pay a premium to live here. The flippers know that,” said Michael Morris of Redfin.

Portland’s red-hot housing market has spawned a growing number of home flips, which produced record gains. But this trend has consequences, both good and bad, for homeowners and prospective buyers.

“I don’t think people like the feeling that their neighborhood is being viewed as an investment opportunity, but of course it is,” said Dr. Gerard Mildner, director of Portland State University’s Center for Real Estate.

In 2015, 1,198 homes were flipped in Portland, according to the real estate brokerage Redfin. That’s the highest number since the housing boom of 2006.

Last year, investors gained more from their flips than ever before. The average flip in Portland increased $121,044 over its original sale price, according to Redfin.

It is important to remember that gains are not profits. Home repairs such as painting, flooring and siding can be costly. There are also fees and taxes during renovation. There’s no guarantee that flippers will make money.

“There’s always the risk that you are buying high and selling low and not catching the market trends at the right moment,” said Mildner.

For existing homeowners, a renovation down the street can improve the look of your neighborhood. It can also help raise the value of your property.

“Any upgrading in the neighborhood is going to upgrade the price of individual homes and apartments around it,” explained Mildner.

Critics say this redevelopment is replacing some of Portland’s affordable housing.

“The more it happens, the more impact it has,” said Bishop Steven Holt, chairman of the Oversight Committee for the North/Northeast Housing Strategies.

“In terms of somebody coming in and buying a house, flipping it, improving it, and then selling it more, it makes it that much difficult for the average individual to be able to purchase a home,” said Bishop Holt.

“They’re competing against people with long pockets, deep dollars and cash purchases,” said Bishop Holt. “We’re kind of living in a time when the American dream is either a nightmare or an impossibility.”

There was strong backlash from the community when the stars of the HGTV show “Flip or Flop” announced a training seminar Portland last December. Organizers postponed the event after harsh criticism on social media.

“It is not clear to me that the home flipper is really doing the damage,” said Mildner of Portland State. “The damage is really our own supply constraints.”

Home flips make up only a small portion, 4.92% of the Portland real estate market.

With limited supply in inner city neighborhoods - and fewer home sales through foreclosure - experts anticipate flippers will look to new locations. Popular neighborhoods, like Richmond have already been picked over and renovated.

“The outer neighborhoods are now starting to see more homes being rehabbed,” said Morris of Redfin. “We’ll continue to see that trend.”