BUFFALO, NY - At Northwestern Hospital in Chicago, Dr. Richard Burt has been doing what once seemed impossible. He's not just treating, but apparently curing debilitating diseases such as multiple sclerosis (MS), through stem cell transplants. 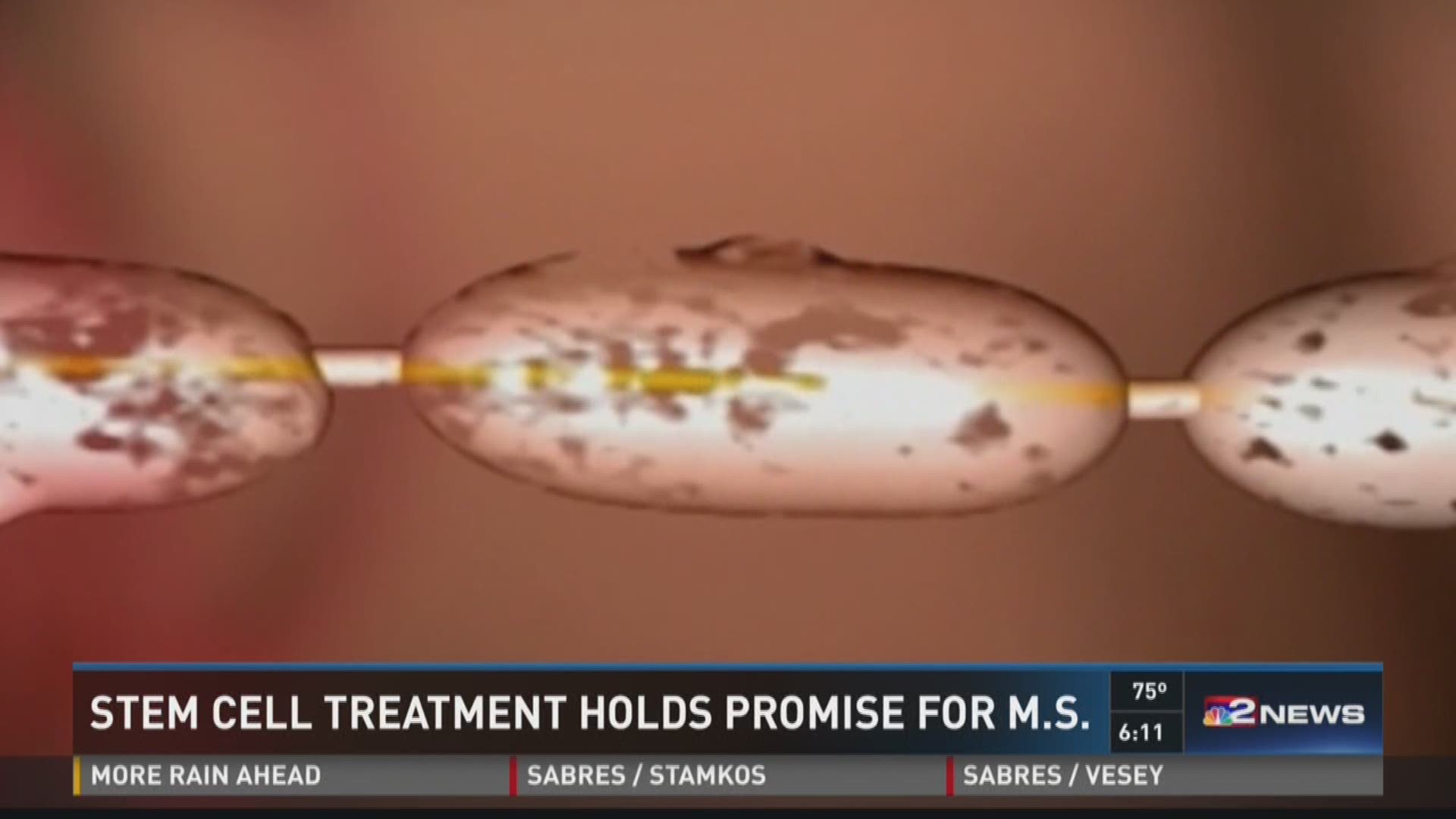 BUFFALO, NY - At Northwestern Hospital in Chicago, Dr. Richard Burt has been doing what once seemed impossible. He's not just treating, but apparently curing debilitating diseases such as multiple sclerosis (MS), through stem cell transplants.

Much like rebooting a computer, the procedure reboots your cells, and with their memory wiped out, they no longer attack the nerve system of those with MS or other auto immune diseases.

Matt Brennan of Tonawanda traveled to Chicago to undergo the treatment, and reports amazing results.
Brennan was afflicted with Chronic Inflammatory Demyelinating Polyneuropathy (CIDP), the so called “cousin disease” to MS.

Prior to having CIDP, Brennan said he was active in sports and at a job that kept him on his feet 12 hours a day.

“Once I had CIDP, I couldn't walk upstairs, I couldn't get out of a chair…couldn't button my shirt or my pants,” he said.

After being accepted into Dr. Burt's program, Brennan went to Chicago in February for treatment and spent 17 days in the hospital.

“I now feel great and have pretty much no symptoms," Brennan told WGRZ during an interview in April. “It truly is a miracle what Dr. Burt is doing out there with modern science and treating these patients."

In Jamestown, 43-year-old Nichole Johnson, a single mom, was diagnosed with MS 8 years ago,

She currently takes a variety of drugs to address it, none of which seem to be stopping the progress of the disease, which has now resulted in active lesions on her brain.

“The hope of our treatment, this one time treatment, is get to get the patient better where they don’t need any more therapy,” said Dr. Burt. “And in the vast majority of patients that's the case."

Johnson also went to Chicago to be seen by Dr. Burt, who also agreed to treat her. However, her insurance company, Univera Healthcare, has thus far denied coverage.

“There is a blanket statement in their policy that says they won't pay for anything that is experimental and investigational,” Johnson explained.

"They’ve been treating MS patients for 20 plus years, so in my opinion I think it's beyond experimental investigational,” said Brennan.

“This has a cure rate of between 85 and 92 percent,” added Johnson. “You don’t get to a phase three clinical trial with the FDA if it doesn't work."

While initially denied coverage, Brennan was able to convince Blue Cross Blue Shield to grant him a one time exemption, and cover the expensive treatment (which can cost up to $200,000) by convincing his insurance carrier it would be financially better for the company.

“If you did the math, my treatments were probably costing about $300,000 per year. I provided a cost analysis which demonstrated to the insurance company that it would save about $3 million in the next decade,” he said.

Johnson tried to make the same case to Univera, without success.

A Univera spokesperson declined any comment on Johnson’s case, insisting that privacy laws prohibit the company from even confirming whether Johnson is an enrolle "even if she showed you her insurance card.”

The spokesperson also reminded us that every customer may avail themselves to an appeal process, should coverage be denied.

However, Johnson was quite aware of this, as she stood in front of a kitchen table covered by paperwork documenting her battle with Univera.

"I have appealed it all the way to the State of New York and they upheld the denial 2-1. It was two doctors that said they agreed with Univera, and one doctor that agreed with me that I should have the stem cell treatment," she said.

Even if Univera were to grant the one time exemption and cover her treatments, Johnson would still have to come up with a hefty co-pay of approximately $30,000.

While Brennan dipped into his 401k to scratch up his co-pay, Johnson has the money ready.

The one thing which she fears she may not have is time.

At age 43, Johnson recalled that her parents were 53 and 49 respectively when they died from complications with MS.

“No one with MS has years to wait. I could wake up with a lesion tomorrow and be paralyzed," she said.