One ONA official said 60% of OHSU’s nurses are considering leaving the profession. He said that percentage is reflected at the national and state levels too. 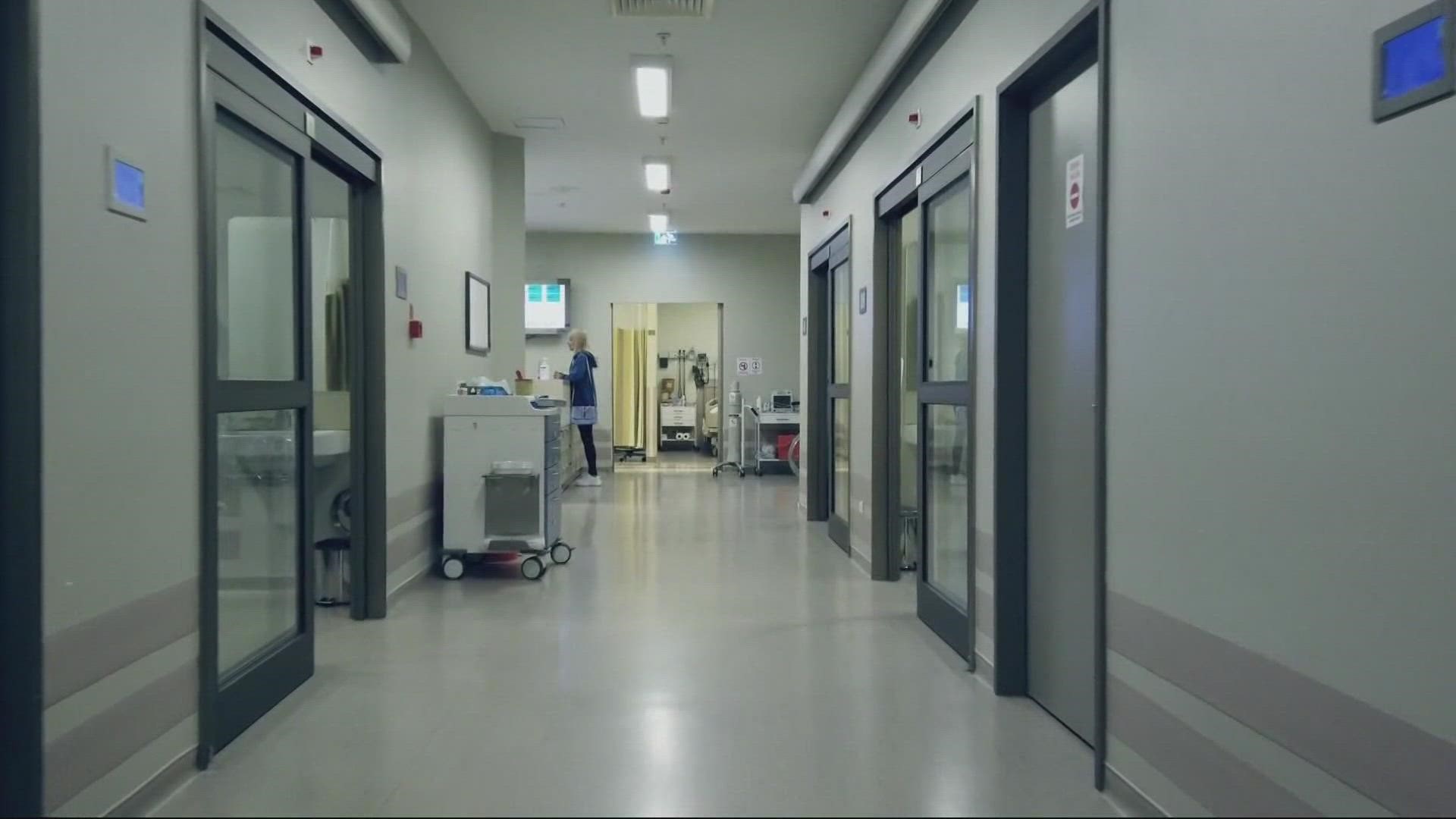 PORTLAND, Ore. — Nurses are calling the nursing shortage in the U.S. and Oregon "historic and catastrophic."

Officials leading the Oregon Nurses Association held a virtual press conference on Thursday and said the staffing issue has been many years in the making, starting before the pandemic. They want hospitals and state lawmakers to step in to fix the situation.

“Oregon’s health care system has been broken for a long time. Our pleas for changes to make the system patient-centered have been ignored by hospital executives for decades,” said Matt Calzia, a registered nurse and nurse practice consultant with the Oregon Nurses Association (ONA).

He and his colleagues say nurses are burned out and longstanding staffing issues have been exacerbated by the pandemic.

“85% of the nurses at OHSU have indicated that they are unable to use vacation time or take a mental health day because there are not enough nurses to cover for those requests. 92% of nurses at OHSU report experiencing mental exhaustion,” said Calzia.

Perhaps the most concerning statistic, Calzia said, was that 60% of OHSU’s nurses are considering leaving the profession. He said that percentage is reflected at the national and state levels too.

“Losing even a single nurse from the bedside will result in greater strain on our health care system,” said ONA board president Lynda Pond.

While Pond said more than 90% of ONA nurses are vaccinated, in recent weeks large health care systems like Kaiser Permanente and Legacy Health have put thousands of staff across the country on leave because of they don’t want to get the COVID-19 vaccine.

“As we see some small number of nurses potentially leaving the profession due to their decision to decline vaccination, we are also concerned that burnout will lead to an even larger number of nurses leaving the bedside. And in Oregon, we will not be able to educate a large enough number of nurses to replace them,” said Natasha Schwartz, a registered nurse who serves on ONA's board of directors.

The nurses we spoke to want two key issues addressed: ways to retain nurses as well as what they called a "nursing workforce pipeline," which basically equates to a need for more support in regard to nursing education and attracting new nurses to the profession.

When it comes to retention of current nursing staff, Calzia said hospitals need to honor legally required meals and breaks for nurses.

He said currently, a “buddy break system” is in place, which significantly contributes to nurse fatigue and impacts patient care.

“Many nurses work 12-hour shifts and never get a rest break. If a nurse wants a break, they must leave all of their patients under the care of another nurse – essentially doubling that nurse’s workload,” Calzia said.

He said the ONA is also calling for hospitals to stop relying on traveling nurses. While they’re an integral part of how hospitals are responding to the hospital staff shortages, Calzia said it’s not the answer to the state’s staffing crisis.

In addition, he said ONA wants more mental health support for nurses is asking Gov. Kate Brown as well as Oregon Health Authority to create a commission to review Oregon’s health care system staffing, with the goal of strengthening staffing.

“Years of neglect by health care system executives has resulted in a near collapse of our system. We can’t allow these health care systems to rush back to the status quo that got us in this situation,” said Calzia.

The bottom line, said ONA officials, is that the staffing crisis needs to be fixed.

“It’s been created and compounded by hospital executives who have consistently chosen to put profits ahead of patients […] it’s cheaper to run lean. It’s cheaper to stretch the people and resources thin,” Pond said.

“Oregon’s health care and social assistance providers are hiring at an unprecedented rate," ” said a press release from the state agencies. "With about 15,000 job vacancies in health care, openings are in direct health care and other positions that support the health care industry, like food service, facilities and business administration."

In response to this article and the data from the ONA, OHSU sent the following statement to KGW:

OHSU acknowledges the immense challenges that nurses and other health care professionals are currently experiencing due to long-term staffing shortages exacerbated by the COVID-19 pandemic. We are grateful for the selfless dedication, care and expertise that these valued individuals provide their patients each day.

Over the past 18 months, OHSU and the ONA have collaboratively agreed upon, and implemented, multiple workplace strategies to support the personal and professional wellness of our nursing teams. We believe that these efforts prove OHSU’s dedication to the ONA, its members and to the patients that seek care at our hospitals and clinics, and we remain committed to the ongoing support of our nursing workforce.

OHSU was not involved with the ONA’s membership survey and is not able to speak to the methodology or recently published data.