Neurologists say the window of treatment for a large stroke is just a few hours, but new technology and research is giving them more time. 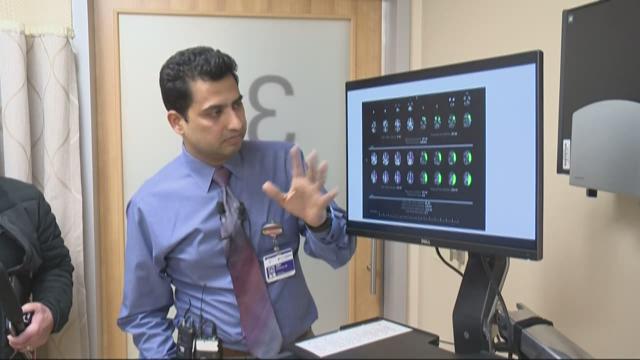 PORTLAND, Ore. -- Every year nearly 800,000 people die from strokes in the U.S., but new research and technology could help reduce that number.

It is research that involved neurologists at Providence Saint Vincent's Medical Center and they say this gives them more time to save lives.

A stroke occurs when something blocks blood flow to the brain. If the blockage is not removed, tissue will quickly die.

Neurologists say the window of treatment for a large stroke is just a few hours, but new technology and research is giving them more time.

“We were able to treat only 10 percent of patients. I'm hopeful we'll be able to treat more now. Up to probably 20 to 25 percent,” said Neurologist Dr. Amit Kansara.

“This software gives us colors too,” said Dr. Kansara. “So we can look at the brain and visually see this part of the brain is still salvageable so we can still offer treatment.”

Previously doctors could not tell the difference between the dead or damaged tissue after six hours. But with the new scan they now can. Studies showed removing the clot that caused the stroke can be effective at saving the damaged area even 16 to 24 hours later. Potentially saving lives that would have previously been beyond help after six hours.

“This study essentially differentiates between salvageable tissue and dead tissue, so on that study we find there is a large area we can salvage. Then the neurologist has 24 hours to remove clot to save that part of the brain,” said Dr. Kansara.

The longer window for treatment will be especially important for people who have a stroke while sleeping and people who don't live near a hospital.

“We can transport patients from smaller to bigger hospitals and this longer window will be tremendously helpful,” Dr. Kansara.

Researchers were so surprised by early results they say they cut the study short to share the information across the country.