While there's a lot of positive feedback for the product, a number of parents have recently posted negative reviews with similar experiences. 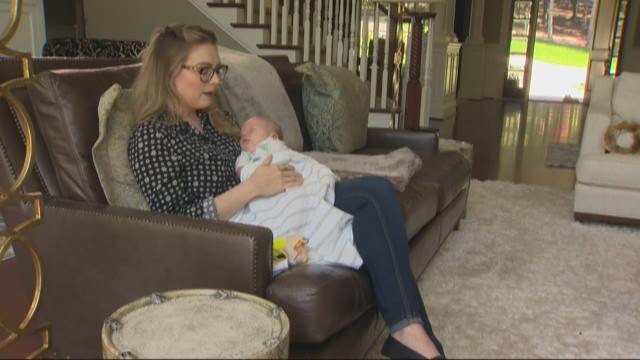 While it's normal for parents to worry about their little ones, she said she recently had a real scare. Her 5-week-old son, Leif, broke out in a rash after using Babyganics Face, Hand and Baby wipes.

“He had really big painful looking bumps on his face,” said Christensen.

So she said she stopped using the wipes on his face, but continued to use them on his body. Then a few days ago, she pulled out another wipe.

“I glanced at them and they had these little black dots on them and I just thought, 'Ew what was that?'”

When Christensen looked a little closer, she said the marks looked more like mold.

“I thought well let me open the next pack and that pack had mold in it as well,” said Christensen.

She searched for reviews online. While there's a lot of positive feedback for the product, a number of parents have recently posted negative reviews with similar experiences.

“I want them to acknowledge there are moldy wipes,” Christensen said.

Christensen said when she and other parents contacted Babyganics through social media, they were told the wipes are safe and were given directions on where else they could buy the product.

“That's when I got upset because you could clearly see by my photos and other consumers photos that there's mold on the wipes,” she said. “We just want answers."

In a statement, Babyganics said:

"A small number of consumers reported concern with the appearance or smell of some of our wipes. We immediately had the affected wipes scientifically tested by a 3rd party laboratory and confirmed that it was not a health or safety concern. We fixed the issue and are replacing the old wipes. Until the new wipes are available, we apologize to our consumers for any inconvenience and are offering coupons along with a selection of our products."

As for little Leif, Christensen said a doctor confirmed the rash but couldn't say what caused it.