Overwhelmed with unvaccinated COVID patients, hospitals turn others away. How do they decide who gets care? 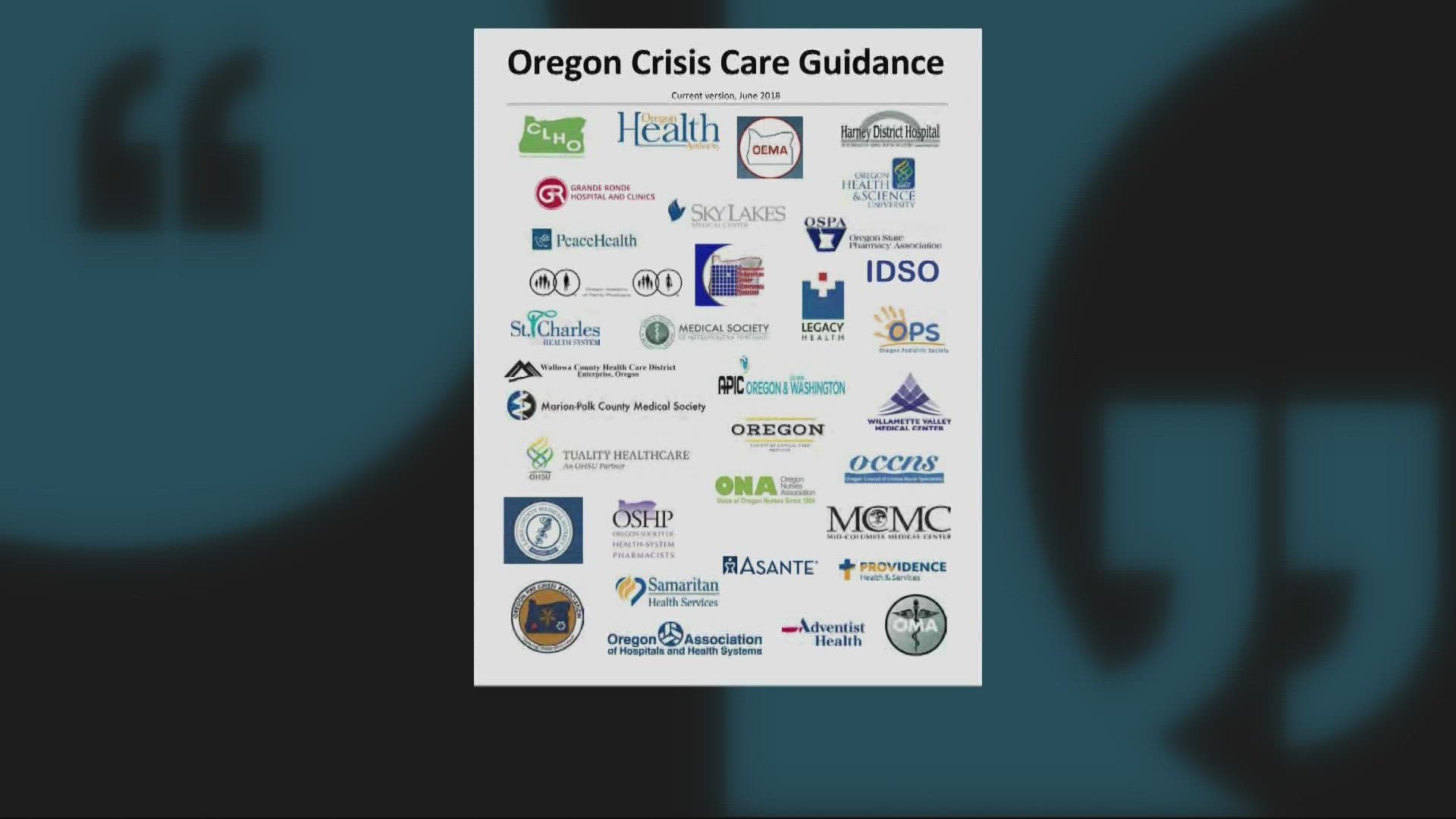 PORTLAND, Ore — State officials and doctors alike say Oregon’s hospitals are full with COVID-19 patients who, largely, are eligible for the vaccine but never got it. During a special KGW series, Overwhelmed: Inside Oregon's ICUs, a doctor at St. Charles Medical Center in Bend said, because of the preventable surge of COVID-19 cases, staff are having to turn away patients, sick with other diseases.

“We know that there are people out in the community that have died because they haven’t been able to get this care,” said emergency department Dr. Gillian Salton. “It’s already happening and I’m very worried that it's going to continue to get worse."

The reality led multiple viewers to ask a tough question about how, in a surge capacity situation like this, medical professionals prioritize patients and care.

A viewer named Stephen wrote into KGW’s team at The Story, asking, “At what point do we consider refusing hospital care to people who are presenting with COVID and who have refused a free, effective, safe vaccine, thereby over-burdening our hospitals and front line medical workers, threatening timely medical response to others, raising health insurance premiums for everyone and fueling a resurgent pandemic?”

“That's a tough one, and I know that there's dialogue about that popping up in the physician ranks and other healthcare areas,” Dr. Absalon said. “At this point in time, that's not happening here in the state.”

Dr. Absalon went on to say “difficult questions” like that may have to be considered in the future. Hours later, via a hospital spokesperson, he clarified, saying he agreed with the state’s stance on the question. Oregon’s state epidemiologist Dr. Dean Sidelinger, at Thursday’s conference, also weighed in on the question.

“While that is a gut reaction to say that people made a choice not to be vaccinated and should fall lower on the list... We have a framework in place that we've worked on with our healthcare partners to prioritize care during these types of crises and emergencies that ensures that we won't discriminate against people because of the choices they've made, because of intellectual or developmental disabilities, or other conditions,” said Dr. Sidelinger. “It won't come down to making a decision based on the vaccine you chose to get or not.”

I warned @TheStoryKGW viewers, this question is jarring... But several people had asked us.

The gist: some Oregon hospitals are so flooded with unvaccinated #COVID patients, they're turning other people with other diseases away. Some have died.

The framework Dr. Sidelinger referred to Thursday is currently being reworked by Oregon’s hospitals and state medical agencies.

For years, doctors and nurses across Oregon were assured that, should a pandemic or natural disaster strike and produce enough injuries or patients to overwhelm hospitals, they could prioritize care based on clear-cut rules laid out in the state’s Crisis Care Guidance.

The more than 60-page guide, which had been approved by agencies like the Oregon Health Authority as well as major hospitals across the state, called for a "just plan" with "evidence-based, objective measures to predict likelihood of survival". It read, “As a general principle, in order to save the greatest number of lives, life-saving interventions should be provided first to those most likely to benefit.”

RELATED: Multnomah County employees will be required to get COVID vaccine

To accomplish that goal, the guidance recommended a team of doctors and healthcare experts, separate from those actually administering the care, refer people with “...confirmed advanced disease or severe injury for which the average life expectancy is less than six to twelve months… to less aggressive care rather than aggressive, critical care.”

Prior to the COVID-19 pandemic, the guidance hadn’t been updated since 2018. In the fall of 2020, state officials announced they were planning an overhaul of the document. They reasoned the old guidance could result in practices that discriminate against people with disabilities, people of color, patients with pre-existing conditions and other groups.

“The principles position Oregon as a national leader in health care justice work, providing a model to other leaders doing this work across the county," State Senator Sara Gelser (D-Corvallis) was quoted saying in the release. "This is only the start of the discussion."

Thursday, KGW reached out to the Oregon Health Authority and other agencies to ask whether a permanent guidance has been released. The agency had yet to respond.

In the meantime, a thorough review of the past and interim guidance templates by KGW revealed no mention of including a person’s vaccine status as criteria to prioritize or de-prioritize their healthcare.

RELATED: Do I need a booster shot if I got the Johnson & Johnson vaccine?