‘We’ve been having 4/20 every day’: Oregon pot shops see spike in business with new curbside delivery

Take-out for weed? In the wake of coronavirus outbreak, OLCC is temporarily allowing marijuana retailers to do curbside delivery. 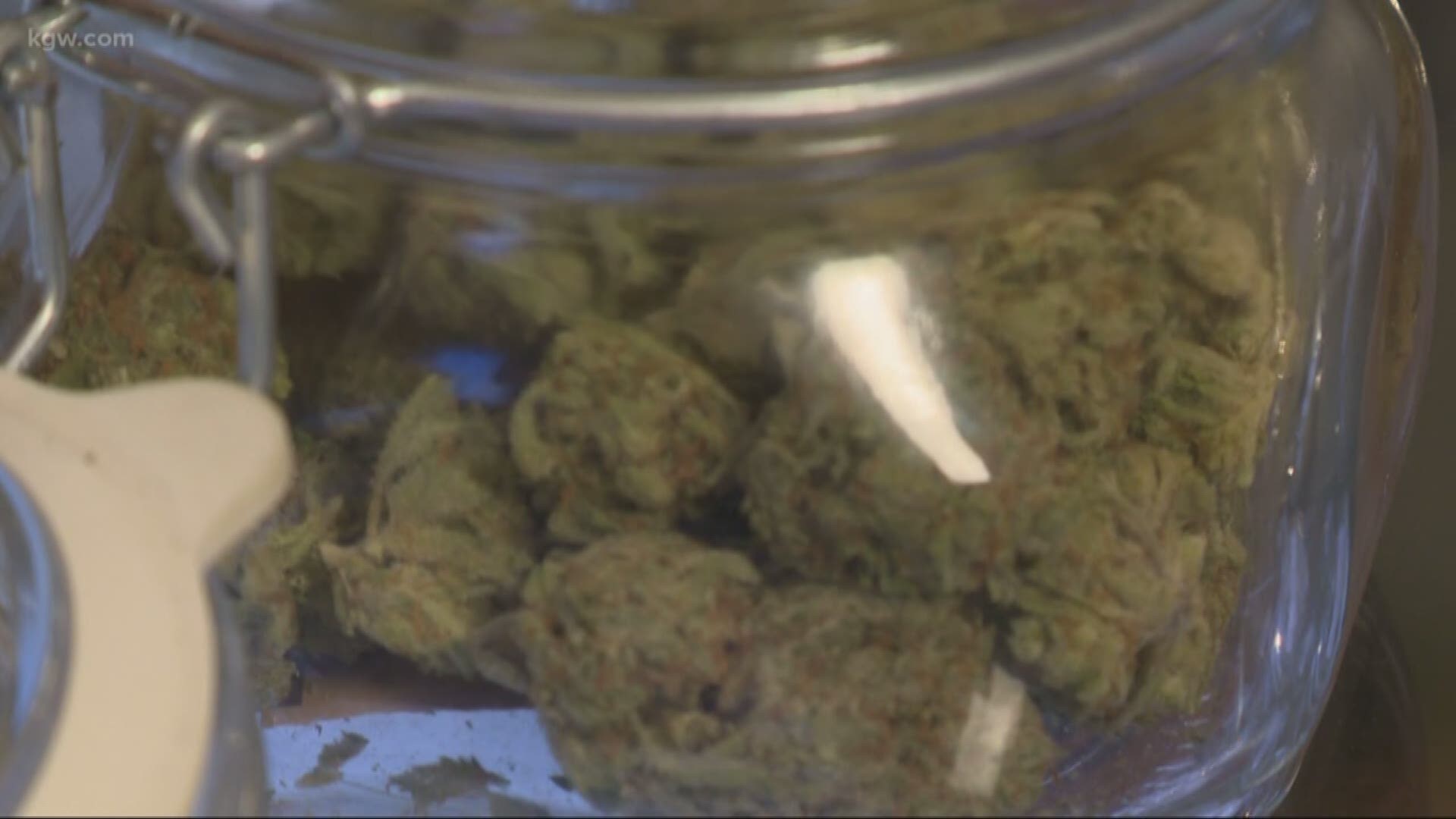 PORTLAND, Ore. — Restaurants, coffee shops, bars, gyms and movie theaters have all been forced to close under Oregon Governor Kate Brown’s executive order, while many other types of business chose to shutter for the foreseeable future to prevent the spread of COVID-19.

But one blossoming industry in Oregon is still up and running, allowed to stay open under the governor's order so long as social distancing guidelines are followed.

The Oregon Liquor Control Commission (OLCC) is temporarily relaxing regulations and letting cannabis shops (and liquor stores) do take-out. They can now provide curbside pick-up in the wake of the COVID-19 outbreak in an effort to maintain social distancing and prevent the spread of the virus.

To mitigate impacts on licensed businesses, the OLCC is allowing marijuana retailers to take orders and deliver products to a person who’s outside the store as long as they’re within 150 feet.

This temporary rule aligns with the governor’s executive order prohibiting crowds of more than 25 and strong recommendations from public health officials to stay three to six feet away from other people. It is meant to balance protecting public health while also helping struggling businesses.

Stores that sell pot are staying open, but this option lets them do business in a way that follows the governor’s executive order and reduces the amount of people inside the store.

What’s more, this new rule ups the amount of flower Oregonians with medical marijuana cards (OMMP) and caregivers can buy to 24 ounces per day, but no more than 32 ounces a month. This temporarily increases the daily limit for cardholders to match their personal possession limit but doesn’t change the total amount they can buy from a dispensary each month.

“Every single decision that this agency is making, both for the liquor and the marijuana industries, are there for the consideration of helping people make a living and continue make a living,” Paul Rosenbaum, OLCC Commission Chair, said in a press release.

Pot shops, and the cannabis industry as a whole, have seen a boon in recent weeks. OLCC data shows during the first two and a half weeks of March, dispensaries saw a 25-30% increase in sales compared to the same time last year.

Cameron Moore, general manager of Bridge City Collective’s North Portland dispensary, says she has seen that spike in business to a “shocking extent”.

The stores are still open for business, with new procedures in place to keep people safe and at a six-foot distance away from other people inside the shop. Moore says Bridge City started curbside pickup services at their two shops in Portland earlier this week and there has been tons of demand.

“I never would have thought ten years ago as a medical patient that one day cannabis would be essential in a crisis like this, but I can see how we are. And definitely patients are happy we’re open. We get a lot of calls every day,” Moore told KGW. “We’re helping people to deal with all the weight we’re all dealing with right now.”

The company is using the same portal for curbside pickup, which is in even higher demand. On Leafly, people can build a profile with personal information, view Bridge City’s menu and build a cart up to the legal amount. Then the dispensary fills the order and is alerted when the customer will arrive. When an employee - wearing gloves - brings the product out to the customer, the customer must present their ID and pay with cash or through a mobile app.

“We’ve been having 4/20 every day for the last two weeks,” Moore said, “And it can be difficult if we have to walk through our entire menu, there is a lot on it. So for people to be able to cruise that on their own then call us to confirm actual pickup or delivery that’s so much easier on both ends.”

Moore says their older clients and those who rely on marijuana for a variety of medical reasons are very receptive and grateful the dispensary is being safe and sanitary.

“People need us to be there. We have older people – people are scared and we’re able to provide something that will help them kind of get through this. It’s not like a liquor store where you really regret it the next day. It’s just really helping people go to sleep and get some rest and that’s why we decided - especially at Bridge City - when that came up as a question it was like, we’re going to be there for our patients. And patients can be a regular customer who’s just trying to feel better.”

But the OLCC says it will crack down and could suspend the rule for the whole industry if any businesses take advantage of it “by disrupting public safety or public health”.

The Commission wants to ensure retailers work with the community so they don’t get in the way of city services.

RELATED: $2 trillion coronavirus deal: Who will get stimulus checks and when?