Lewis County Sheriff on mask requirement: 'Don't be a sheep'

After Gov. Jay Inslee's announcement of a statewide order to wear face-coverings in public, several Washington sheriffs have weighed in on enforcement. 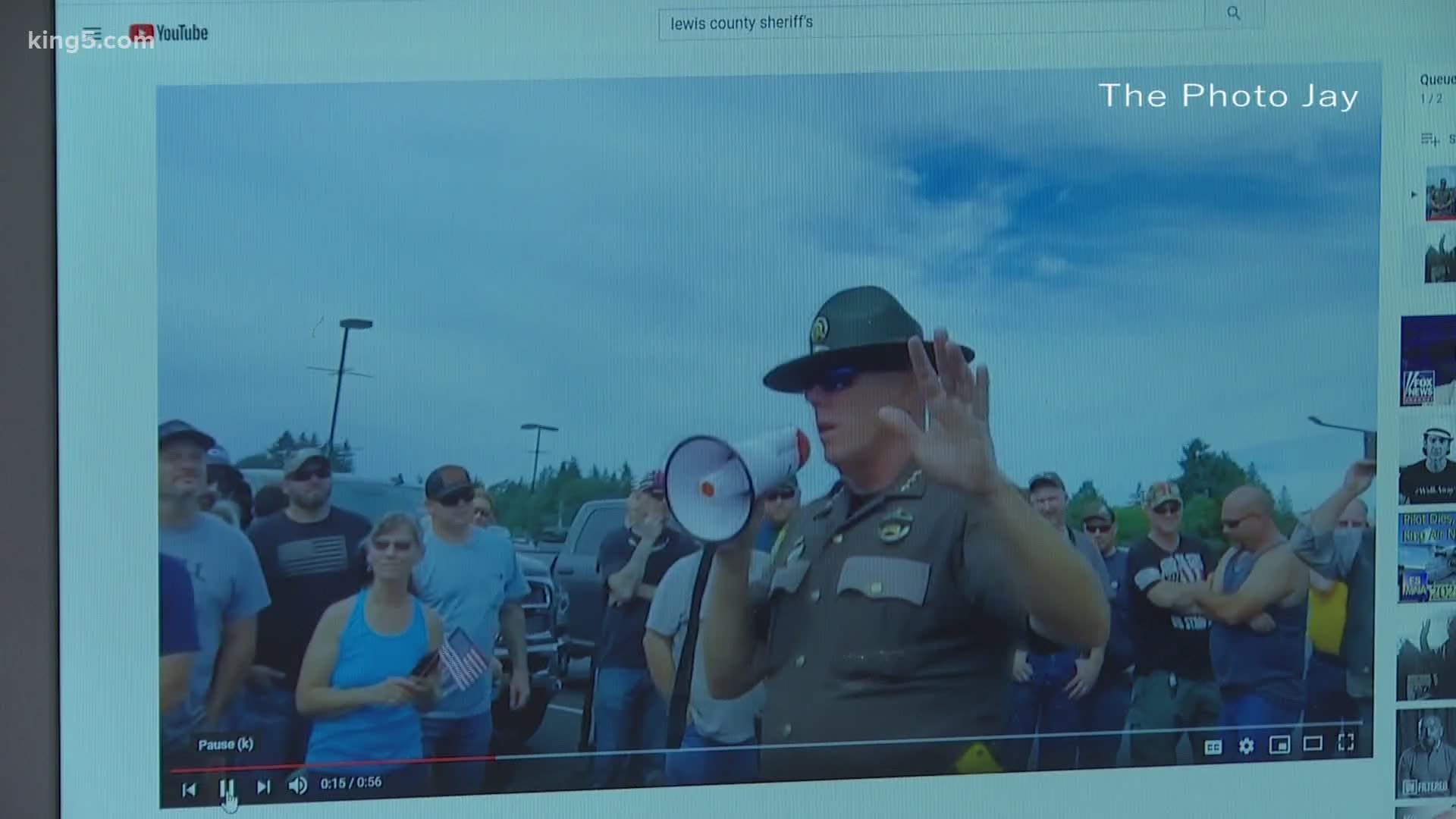 Lewis County Sheriff Robert Snaza was recorded addressing a crowd of people Tuesday night. He said the group had gathered to protect a sign they thought might be burned. He noted some were armed.

“In case you guys didn’t hear, Gov. Inslee in his infinite wisdom has decided after over a hundred and some odd days that we should all wear face masks, inside and out,” he said, in the video. “Here’s what I say – don’t be a sheep.”

Snaza's comments were met with applause.

KING 5 asked him to clarify for those comments Wednesday.

State officials have said that coronavirus continues to spread throughout Washington, but that people can slow the virus' spread by covering their noses and mouths.

The order mandates face coverings in public – with some exceptions.

Inslee’s office has said violation of the order could be enforced as a misdemeanor, though the governor hopes people will comply voluntarily.

Mask and face-covering policies have generated controversy for weeks nationwide – as businesses require customers to wear them, and some governing bodies mull requiring them in public, going beyond previous guidance that only recommended the coverings.

Videos have circulated online of people confronting store employees when asked to mask up.

KING 5 asked Snaza if deputies will enforce the order.

“I’m going to say we’ll take it on a case by case basis,” he said. “I won’t give a definite answer.”

Others sheriffs offices issued statements on enforcement of the orders.

The Thurston County Sheriff's Office said enforcement would not be criminally enforced.

“Due to the minor nature of this offense, and the possibility for a negative outcome during an enforcement encounter and various ways in which the order may be violated, it would be inappropriate for deputies to criminally enforce this mandate," according to the statement. "TCSO deputies will not be doing so, rather, we will continue to engage with people when appropriate, and educate them in partnership with public health staff.”

Thurston County deputies will not be required to wear coverings on emergency responses and mask-wearing will be left to each deputy's discretion.

The Thurston County Sheriff's Office added it has received complaints and concerns from the public about deputies not wearing masks.

The Grant County Sheriff’s Office also said enforcement of mask-wearing was not a priority, and that there wouldn't be room in the jail.

“The Grant County Sheriff’s Office has much larger public safety priorities than writing a ticket for a person not wearing a mask,” said Sheriff Tom Jones in the prepared statement.

“Our jail is on restrictions to prevent the spread of COVID-19, and therefore violations of the Governor’s order will not meet the booking criteria. I have full trust in the residents and business owners of our great county that they will continue to use common sense and good judgment to be safe. Their efforts will support Grant County moving to Phase 3 of the reopening plan.”

Snaza said he doesn't accept that the pandemic is the new normal for Washington.

“I will tell you this, how about if it makes you feel that this will help reduce it, I will say to each individual – if they feel the need to wear the mask, wear the mask,” Snaza said. “But now you’re making it an order, and then you’re saying if you don’t like the order, I’m going to arrest you, or cite you. And I find that we’re going to the extreme. And that extreme, I just have a hard time dealing with.”

KING 5 asked him how that compares to a speeding driver killing someone – a choice to speed that may feel safe for the driver leading to injury or death for another person.

“I think it’s totally different, apples to oranges,” Snaza said. “A citation is an infraction, monetary, small infraction. This is a misdemeanor crime. Totally different. And the average person that gets stopped for speeding, issued citations is 1 in 4, 1 in 5 statistically. So how many times do you get stopped and get a verbal warning? Hopefully, you get more warnings than you do tickets. There are times you get tickets.”

He said more blatant violations of the mask order could result in enforcement, that deputies will "do what they need to do.”

RELATED: These states require face masks be worn in public