County health leaders are directing teachers and those in Phase 1A to a new online scheduling tool, but warned people might have to wait weeks for an appointment. 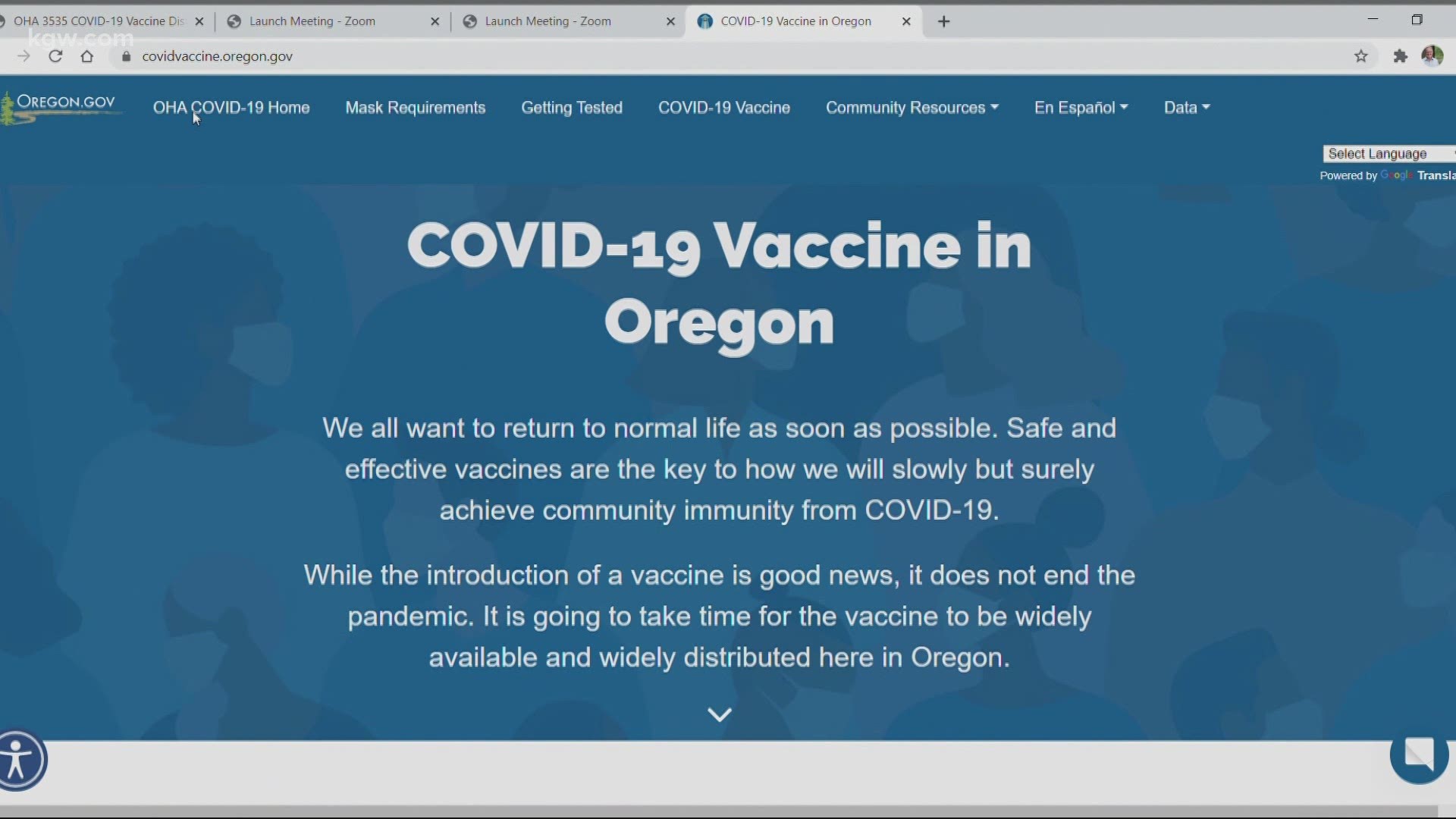 PORTLAND, Ore — Health leaders in Multnomah, Washington and Clackamas counties on Tuesday announced a new online tool where eligible Oregonians can sign up to receive their COVID-19 vaccines but warned it may still take months to vaccinate everyone in Phase 1A.

“We want to emphasize that there are still tens of thousands of people in Phase 1A in the metro counties who have not received their first dose of vaccine and who should be prepared to wait weeks, if not months,’’ said Multnomah County Public Health Director Jessica Guernsey. “We understand people are frustrated and we share their frustration. There is not enough vaccine to vaccinate everyone who is eligible or for everyone who has filled out our survey.”

That initial survey was intended to link Oregonians in Phase 1A to health systems and set up appointments once vaccines were available. It went online Jan. 12, before Oregon Gov. Kate Brown announced a timeline to vaccinate teachers and school staff. Officials closed the survey at noon on Tuesday.

“Oregon Health Authority has said that most people in the 1A priority group are vaccinated,” said Washington County Health Officer Dr. Christina Baumann. "That may be true in other parts of the state, but it’s not true in the metro area. People who signed up using this survey expected they’d receive the vaccine in a timely manner, and local public health expected that as well. Now that seems improbable."

RELATED: Thousands of 1A health care workers still waiting to get COVID vaccine in Oregon

Now health officials are referring everyone in Phase 1A to the new eligibility and scheduling tool on the Oregon Health Authority (OHA) website. Click on the button that says "get started" or the icon in the lower right corner of the website with a white chat box surround by a blue circle.

County health leaders said anyone in Phase 1A who already has an appointment to be vaccinated should plan on going to their scheduled appointment. People who filled out the survey but have not heard back should go to the eligibility tool to schedule an appointment.

Eligible Oregonians still may not get an appointment for several weeks, health officials said.

“The scheduling system can only handle 1,000 people at a time, so people may have to try back several times,” said a news release from the metro counties. “Once appointments are full for the week they will have to try again the next week.”

RELATED: As more people become eligible to get the COVID-19 vaccine in Oregon, supply remains an issue

In Oregon, teachers are now eligible for vaccines. Seniors 80 and older will be eligible the week of Feb. 7. In the weeks that follow, Oregon seniors in younger age groups will become eligible.

The governor has repeatedly defended her controversial decision to prioritize teachers and school staff over Oregon’s seniors. She argues vaccinating educators before Oregon's seniors is the only way schools can safely reopen during this school year. She said students must return to schools for their own mental health.

The Centers for Disease Control and Prevention recommends that people 65 and older be vaccinated after health care workers and before other essential workers.