Oregon will not receive an increased shipment of COVID-19 vaccines, Gov. Brown said Friday. As a result, the state is delaying vaccinating seniors. 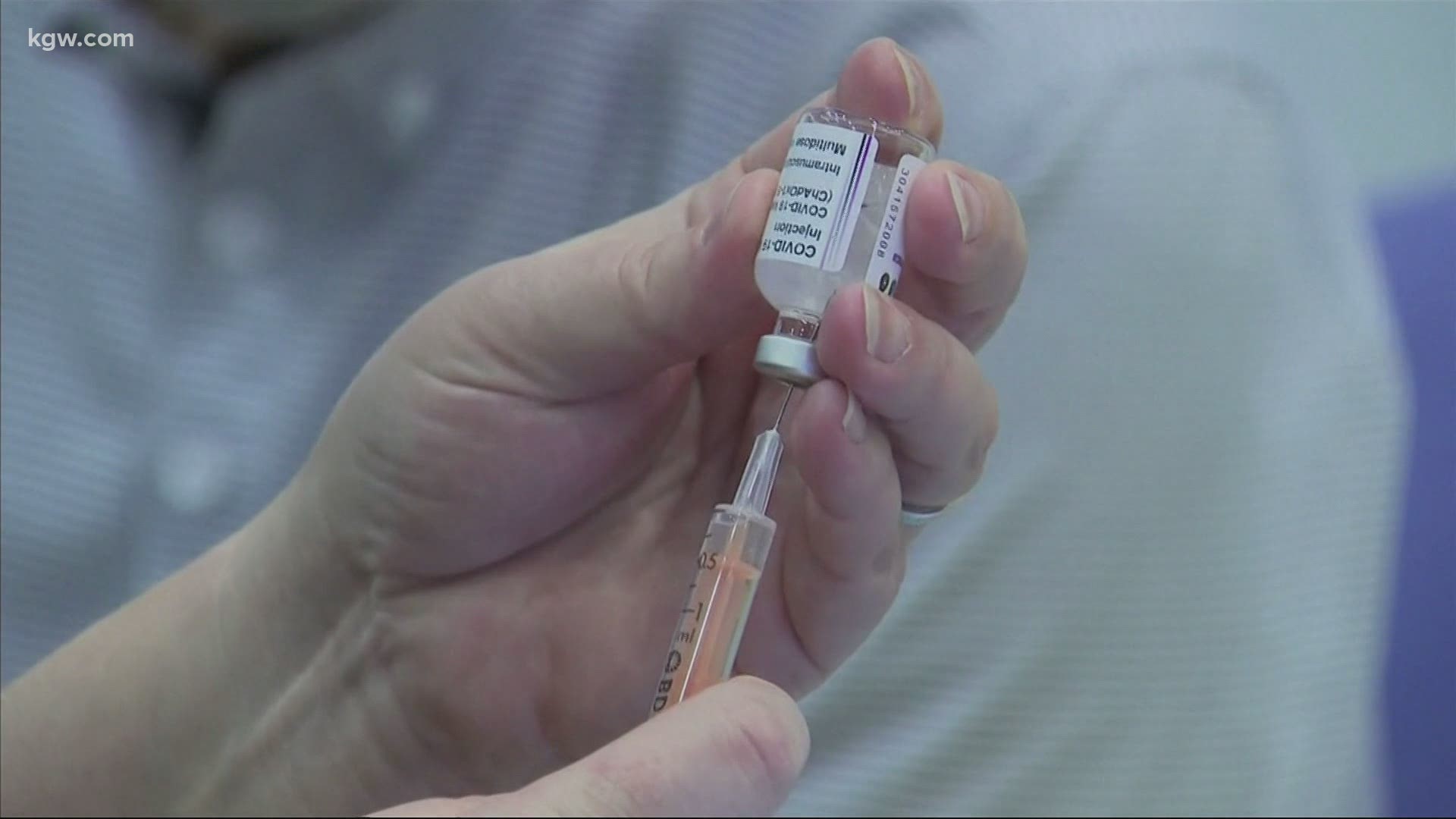 PORTLAND, Ore — Oregon and other states will not receive increased shipments of the COVID-19 vaccine from the national stockpile next week because no such stockpile exists, Gov. Kate Brown said Friday.

Earlier this week, Brown announced that people over 65, teachers and child care providers would be eligible for the vaccine on Jan. 23. The announcement was based on the expectation that Oregon would receive more shipments of the vaccine.

At a news conference Friday afternoon, Brown said Oregon will begin vaccinating educators and other school staff on Jan. 25, but the state will delay vaccinating seniors for two weeks. Oregonians 80 and older will be eligible for vaccines starting Feb. 8. Over the following three weeks, Oregon plans to vaccinate more seniors in waves:

In a series of tweets Friday morning, Brown said she learned there was no federal vaccine reserve Thursday night. The news was confirmed to her by General Gustave Perna, who is the chief operating officer of Operation Warp Speed, the Trump administration’s effort to quickly develop and distribute a COVID-19 vaccine.

“I am demanding answers from the Trump administration,” Brown said. “I am shocked and appalled that they have set an expectation on which they could not deliver, with such grave consequences.”

Last night, I received disturbing news, confirmed to me directly by General Perna of Operation Warp Speed: States will not be receiving increased shipments of vaccines from the national stockpile next week, because there is no federal reserve of doses.

Oregon Health Authority (OHA) Director Patrick Allen wrote a letter to Human Services Secretary Alex Azar after learning about the lack of a national stockpile and demanded an explanation. “If this information is accurate, we will be unable to begin vaccinating our vulnerable seniors on Jan. 23 as planned,” Allen wrote.

At Friday's news conference, Allen said he has not received a response to his letter. Oregon was expecting to receive 200,000 doses from the federal reserve in order to expedite vaccinations for teachers and seniors, he said.

“We intend to fulfill our commitment to educators and seniors, but we’ll need to adjust our timeline,” Allen said.

The Washington Post reports that Azar announced this week that the government would begin releasing vaccines it was holding for second doses. But there were no reserves to release from. Operation Warp Speed stopped stockpiling doses of the Pfizer-BioNTech vaccine at the end of 2020 and took second doses off the manufacturing line.

Brown called the news “deception on a national scale” and said the Trump administration's empty promises are "literally playing with people's lives."

“Oregon’s seniors, teachers, all of us, were depending on the promise of Oregon’s share of the federal reserve of vaccines being released to us,” Brown tweeted.

This is a deception on a national scale. Oregon’s seniors, teachers, all of us, were depending on the promise of Oregon’s share of the federal reserve of vaccines being released to us.

Also at Friday's news conference, Legacy Health chief operating officer Trent Green announced a joint plan by major area health systems, including Legacy, Oregon Health & Science University, Kaiser Permanente and Providence, to create a mass vaccination site at the Oregon Convention Center in Portland, with a goal to be up and running by Jan. 20.

Green said depending on the supply Oregon receives, health leaders will start with a model to vaccinate 5,000 people per day and scale up with the goal of vaccinating up to 25,000 per day.

Washington Gov. Jay Inslee said governors were told repeatedly that there was a federal reserve of vaccines, and the Trump administration "must answer immediately for this deception."

Governors were told repeatedly by @HHSgov there was a strategic reserve of vaccines, and this week, the American people were told it’d be released to increase supply of vaccine.

It appears now that no reserve exists. The Trump admin. must answer immediately for this deception. https://t.co/JJky0NcbPi

U.S. Rep. Suzanne Bonamici (D-Oregon) said without additional supplies of vaccine, more Oregonians may have to wait to be vaccinated.

"The Trump Administration promised Oregon and other states additional supplies of vaccine from Operation Warp Speed reserves," the congresswoman said in a statement. "Now we find out that there are no reserves, which means more Oregonians have to wait longer to be vaccinated. Thousands of people are dying every day from COVID and getting vaccines to the American people is a matter of life and death. New federal leadership can't come soon enough."

“General Perna and HHS Secretary Azar need to immediately answer for deceiving states AGAIN—this time about the supply of vaccines in the strategic reserve, undermining Oregon’s vaccination efforts. This is completely unacceptable. I am demanding answers.”

It’s hard to tell which is worse – the Trump administration’s lies or its incompetence. Either way, its latest failure to provide vaccines is completely unacceptable for Americans counting on them. I'll be pressing for answers. New leadership can't come soon enough. https://t.co/vykIqRdLXE

U.S. Rep Peter DeFazio (D-Oregon) said this was another "shameful and dangerous lie from the Trump administration.

Another incredibly shameful and dangerous lie from the Trump Administration: They promised shipments from the fed stockpile of COVID-19 vaccines, when the stockpile was already depleted, w/millions still unvaccinated. They must answer for this gross incompetence. https://t.co/W0wg1Q4vzZ