Oregon tribes say they have enough vaccine, but many members are skeptical

The issue for Oregon tribes isn't with the vaccine supply they're receiving; it's trying to change historical attitudes of distrust for the medical system 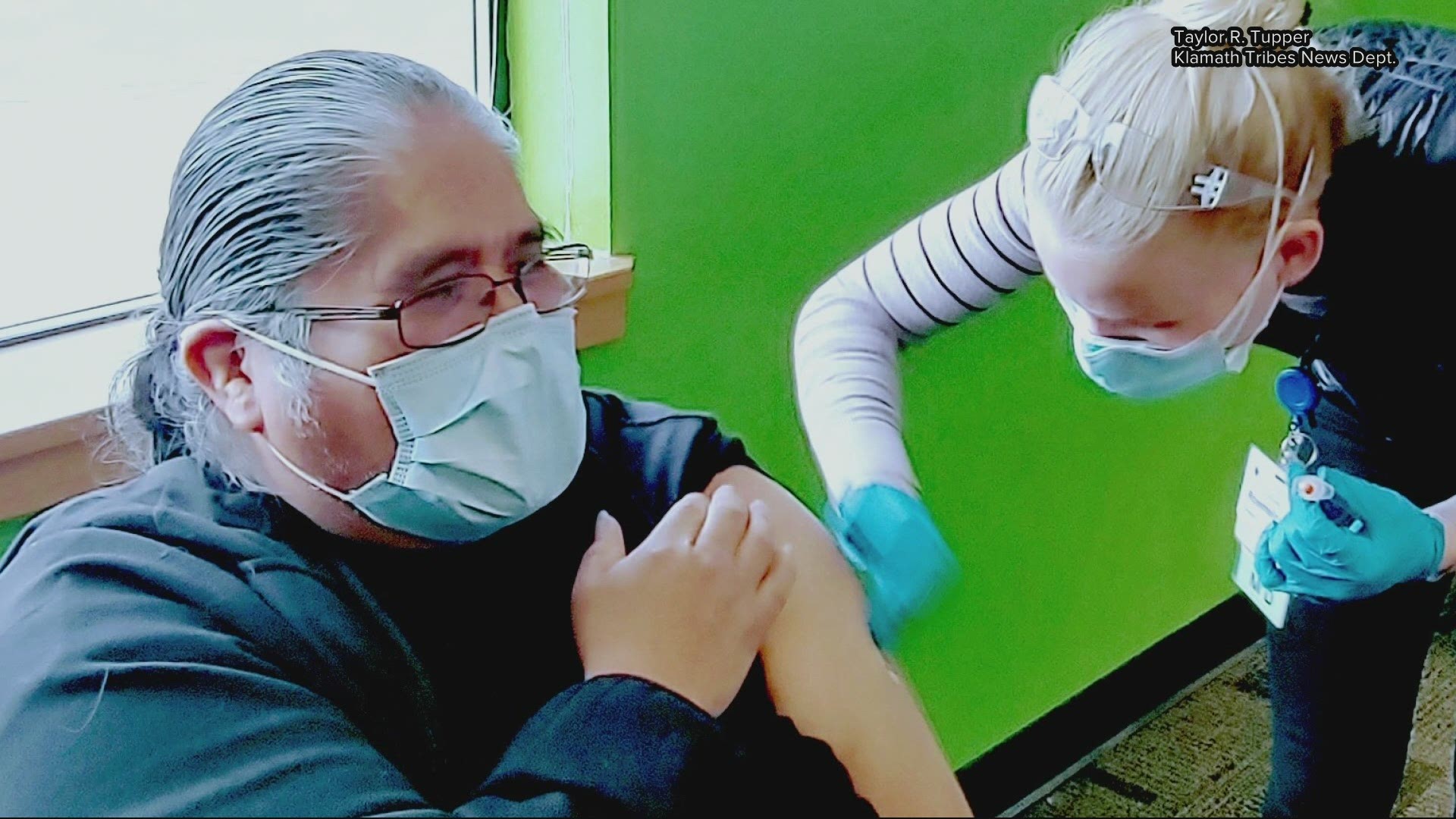 PORTLAND, Ore. — We emailed or called Oregon's nine major tribes to check in on how they are doing with COVID-19 vaccinations. We wanted to know if the state or federal government were giving them enough supplies.

We heard back from four of the nine.

“It’s been a very amazing program we’ve been able to put together,” said Misty Wadzeck, the tribal health nurse supervisor for the Klamath tribes.

She said they're getting enough vaccine from the Oregon Health Authority and not being overlooked.

“We’ve actually been able to reach out and support the vaccination effort in Klamath County," she said. "And even lead the effort with vaccinations in some ways in that area.”

Wadzeck said there is enough vaccine to offer it to any tribal member who is 18 or older, plus all of their contacts.

In eastern Oregon, the Umatilla tribe has vaccinated more than 2,000 people. Lisa Guzman, CEO of Yellowhawk Tribal Health, said that includes about 667 tribal members, which is roughly 23% of the tribe. It also includes more than 400 Native Americans who belong to other tribes, and 950 other community members.

She said it’s a challenge to convince some members that the COVID shot is safe.

“Historically our Indian communities have difficulty trusting health systems,” she said. But as more people get vaccinated, more members see that the shots are not hurting them.

“We have tribal membership that once declined, now stepping in and saying, 'I want the vaccination.' I think it was just a matter of education,” she said.

The Umatilla tribes are getting vaccine directly from the federal government through the Indian Health Service.

There is enough extra right now to offer it to athletes at the five school districts near the reservation.

The tribe will hold mass vaccination events and give shots to 155 teenage athletes Tuesday and Wednesday.

60 miles southwest of Portland, the Grand Ronde tribe has given out the majority of shots in Oregon on tribal lands, 9,000 and counting. More than 5,200 of those shots went into the arms of tribal members, covering 58%, according to Kelly Rowe, executive director of health services for The Confederated Tribes of Grand Ronde.

“We’ve always wanted to be able to spread wider than just to our membership and to our clinic patients,” she said. And so they are holding mass vaccination events open to the general public.

You can sign up on their Facebook page and if there is a slot open you will get a personal invitation email.

As with the other tribes the Grand Ronde are educating members, showing them the vaccine is safe, and hoping more will get the shots.

The Coquille tribe in the Coos Bay area has about 1,100 members. A spokesperson said many live too far away to be vaccinated by the tribe.

But, Clark Walworth, communications director for the tribe, said 80% of all elders and their spouses living in the tribe’s five-county service area have been vaccinated, along with more than 50% living throughout Oregon.

He said the tribe is getting an adequate supply of vaccine and that it has held vaccination events for members in Portland, Medford, Eugene, Roseburg and North Bend.