Although numbers on paper indicate Oregon is nearing the herd immunity finish line, health officials face an uphill battle to really get there. 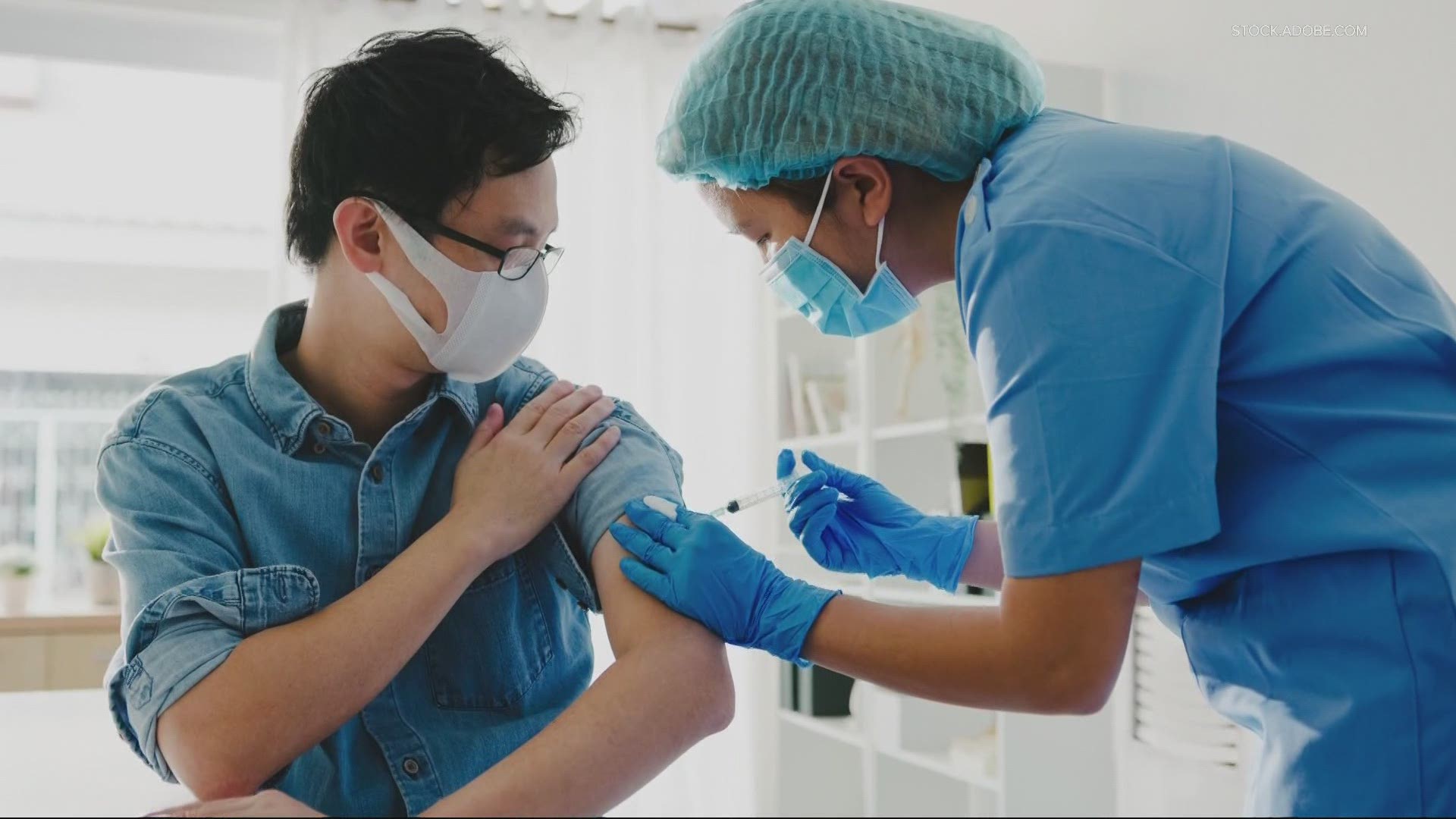 OREGON, USA — Oregon's vaccination rates against COVID-19 are growing, but the numbers don't tell the whole story for each county.

Oregon Health Authority's dashboard shows as of June 1, more than 62% of Oregonians 16 and older had received at least one COVID shot. Nearly 53% were fully vaccinated.

That difference shows the challenge many counties face, including those with higher vaccination rates.

Multnomah County indicates 68% of its 16+ population had received at least one dose, while 57% were fully vaccinated.

"There are communities with low levels of trust for government and for healthcare," Vines explained. "We have to take our time to build those relationships and to give information in a way that people can hear it and take it in...at the right time, from the right person."

Multnomah County has been working with community organizations and faith leaders who have more direct access and trust with these communities. Undervaccinated groups include some communities of color, immigrants, and people wary of the government's involvement in vaccine rollout.

"We're now going to have to work harder for each vaccine," Vines said.

Adolescents are another target audience.

Both Washington and Clackamas County numbers show about 35% of 12-15 year olds have been vaccinated. That number is above 40% in Multnomah County.

Benton County has Oregon's highest vaccination rate, at 69% of its 16+ population and 63% fully vaccinated. Even as it nears the 70% herd immunity threshold, a county spokesperson told KGW last month, work aims to go beyond that mark.

"I'm not sure there is a finish line," said Kelley Locey with Benton County. "I think what you really want to do is to continue increasing our vaccination efforts."

Other counties are struggling to reach even half their populations.

Both Malheur and Umatilla Counties sit between 30-35% vaccinated.

County health leaders in both areas cited an uphill battle against misinformation.

"Make sure we're separating this from politics, and keeping this in health care and public health," emphasized Malheur County health director Sarah Poe.

Klamath County in southern Oregon is faring somewhat better, with 43% of its 16+ population vaccinated with at least one dose, and 37% fully vaccinated.

However, for the last few months, hospitals like Sky Lakes Medical Center have been nearly full while caring for severe COVID patients.

"What was different this time around is that the patients were on average ten years younger than back in the winter," said the hospital's vice president for medical affairs Dr. Grant Niskanen. "We had a 52-year-old gentleman pass away a couple weeks ago."

In mid May, Niskanen published an urgent plea to his neighbors to get vaccinated.

"It is very unsettling for us. It did take a toll on the staff here. We're tired now," he said.

Niskanen noted cases in Klamath Falls appear to be dropping, in part because of community immunity; many people have already gotten ill and recovered from COVID.

That in itself presents a cultural challenge.

"They see [how] their friends did, their relatives did, and if they did relatively well with COVID, it is difficult for them to see why they need a vaccine," Niskanen explained.

In turn, officials in Umatilla County are using the power of encouragement, creating public information campaigns that feature prominent community members who have been vaccinated.

"People are more comfortable receiving it if they see others around them receiving it," said Umatilla County health director Joseph Fiumara.

Niskanen expressed optimism that other incentives have helped boost vaccination rates in rural Oregon counties, including the governor's lottery program. People in less populated counties have higher odds of winning some of the available cash winnings if they get vaccinated.

RELATED: Here are the odds of winning Oregon's vaccine lottery prizes in some counties

Ultimately, from the county health officials to the frontline medical workers, the goal to save lives is the same.

"We don't want this to happen again," Niskanen said.