More than 267,000 doses of COVID-19 vaccines expected to be shipped to Oregon this month 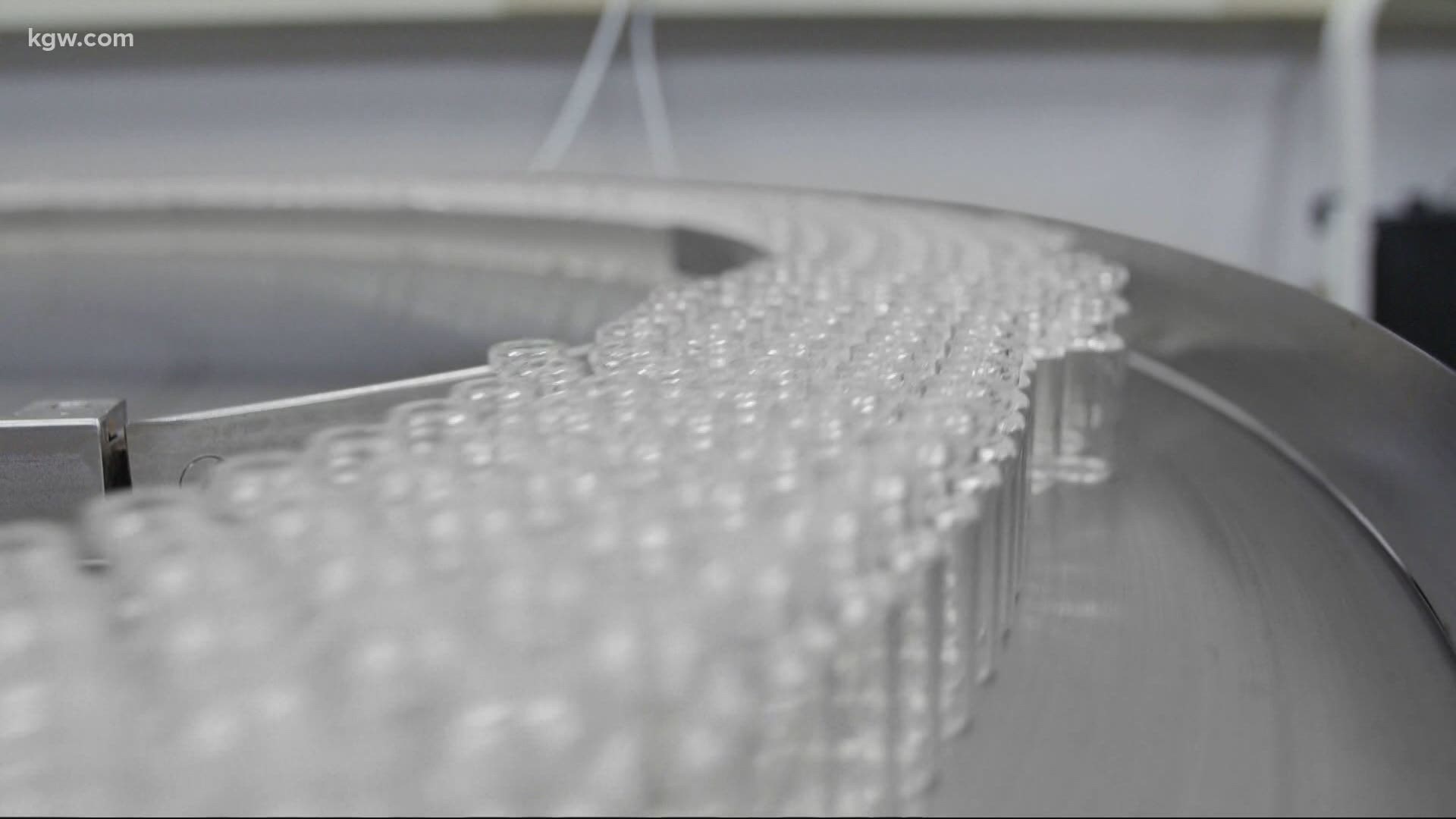 PORTLAND, Ore. — On a day when Oregon set new daily records for COVID-19 cases and deaths, Oregon Gov. Kate Brown offered some hope for the future, saying that 267,400 doses of the Pfizer and Moderna vaccines are expected to be shipped to Oregon this month.

During a media briefing Friday, Brown announced that Oregon set a daily high for deaths, with 30, and a daily high for new confirmed and presumptive cases, with 2,176. With the latest reported numbers, Oregon has surpassed 80,000 known cases of COVID-19 and 1,000 deaths due to the virus.

RELATED: What we know about the COVID-19 vaccine in Oregon

Help may be on the way, though. Brown also spoke about the two vaccines, from Pfizer and Moderna, that are nearing FDA approval. Oregon health officials said that a total of 147,950 first doses of the vaccines would be shipped to Oregon in mid-December, while another 119,450 second doses of the vaccine would be shipped to Oregon later in the month.

Here's a look at when the doses are expected to be shipped:

Brown said that the priority for the first doses of the vaccines will be front-line health care workers, including doctors, nurses and janitorial staff.

"Ten months into this pandemic, when we are all so incredibly tired of dealing with COVID-19, the data is showing that the majority of Oregonians are listening to public health recommendations: You're wearing your masks and staying home," Brown said. "With Oregon slated to begin receiving vaccines in mid-December, there is some light at the end of the tunnel.

"But the introduction of a vaccine does not end this pandemic. Right now and into the foreseeable future, the only way to reduce transmission and slow the spread of this disease is to continue to take safety precautions until the vaccine is both widely available and widely administered."

State health officials said if Oregon remains at its current transmission levels, the state could see more than 2,000 cases per day by Christmas.

"Right now and for the foreseeable future, the only way to reduce transmission and slow the spread is to take safety precautions," Brown said. "This is going to take time."

Oregon's statewide freeze came to an end Wednesday and a new framework of restrictions, based on each county's COVID-19 risk level, went into effect Thursday.

On Friday, OHA announced that 30 more Oregonians died due to COVID-19, marking the sixth time Oregon has reported more than 20 deaths in one day. The state's death toll is 1,003.

Oregon health officials have reported at least 1,000 new cases in the state in 16 of the past 17 days, including a new record of 2,176 cases on Friday. The only day with fewer than 1,000 new cases was the day after Thanksgiving, which health officials attributed to delayed reporting because of the holiday. There have been 81,439 known cases of COVID-19 in Oregon.

The number of hospitalized COVID-19 patients in Oregon continues to increase, with OHA reporting Thursday that 559 people are currently in the hospital because of COVID-19, 10 more than the previous day's report.

Oregon health officials also reported 108 workplace outbreaks as of this week, the largest number since the pandemic began, and OHA has reported six consecutive weeks of record-high weekly COVID-19 cases in the state. The latest report, released Wednesday, reported 9,100 cases of the coronavirus, a 5% increase over the previous week's case count.