A redesign launching Thursday will only allow 3,800 people at a time to use the scheduling site, in the hope it will prevent the glitches people have seen thus far. 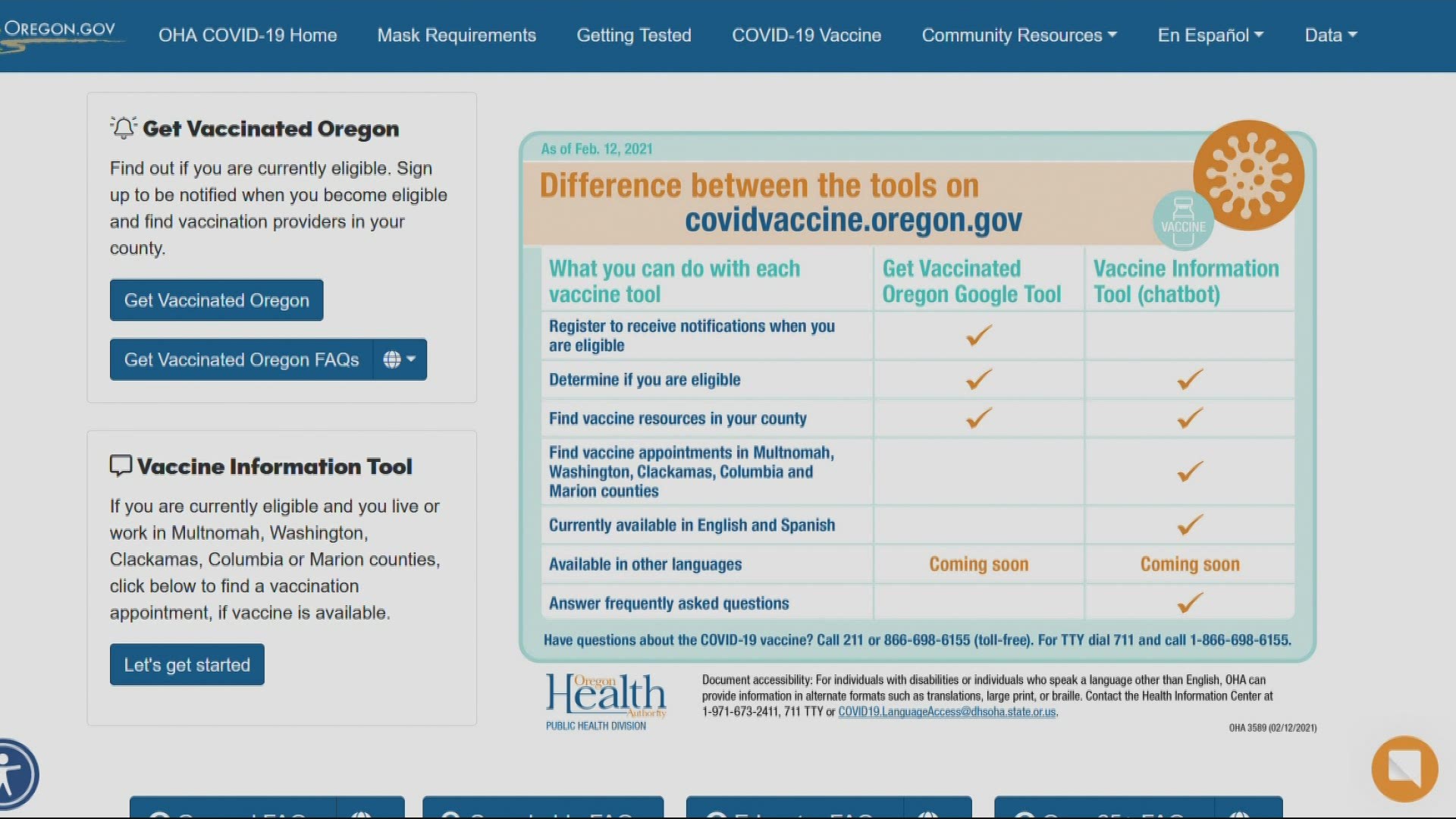 PORTLAND, Ore. — Legacy Health will limit the number of people who can access the online registration portal on Thursday morning to make vaccine appointments at the Oregon Convention Center. It's an effort to prevent the widespread problems we saw when the site was overloaded with users on Monday.

Only 3,800 people at a time will be allowed on the website when it opens for reservations at 9 a.m. Thursday. The convention center is the metro area's largest vaccination clinic.

Additionally, 500 reservations will be held back for people who need to book by phone through the 211 call center.

It is one of the changes Legacy Health, which owns the scheduling website, is making to keep the website from crashing.

The other big change will be a 10-minute timer for each person, which is supposed to reserve the appointment you click on, but only until that time is up.

Legacy hopes it will keep appointments from disappearing, as some have for the last couple weeks, even after people clicked on them. The redesign should also help the Captcha anti-robot screening tool from booting people off the site as they try to finalize their registration.

It means tens of thousands of seniors will be kept out of the site from the first attempt. Many will be frustrated, just like they were Monday when 70-year-olds and above became eligible.

“I would say that they did not test that very well,” said Randy Prakken.

He is one of the frustrated seniors who thought he had an appointment on the site Monday, only to find later he did not.

He's also in a unique position to know just how bad things are with the site. He holds multiple engineering degrees, including one from MIT, and before retirement he created websites designed to expand and handle surges in traffic.

“A system properly designed these days--now this is my opinion it’s not everybody’s I’m sure--would involve having part of the system, or a backup to the system, or a design of the system, so that intensive parts could be done by cloud services like Amazon Web Services, which can be clicked up quickly to provide five or 10 times the capacity,” Prakken said. "Now that doesn’t just happen by clicking a few things. You have to redesign your whole system to do that."

He said that sort of work could take six months. The scheduling site now in use for Portland was adapted in just four weeks.

Legacy Health spokesman Brian Terrett said nothing was done six months ago because it was not yet clear how vaccines would be distributed or who would be responsible for that until the last minute.

RELATED: Here's how to get the COVID vaccine in Oregon

The result is that a system designed to allow medical patients to email their doctors or order prescription refills is now trying to handle hundreds of thousands of vaccine seekers all at once.

There is way more traffic than it can handle.

In the greater Portland area, Legacy estimates there are 230,000 people eligible for shots right now who are still waiting for their first dose. And each week they compete for roughly 15,000 COVID-19 shots.

Next Monday, even more will join them as 258,000 people 65 and older are scheduled to become eligible for the vaccine in Oregon.

“And we’re going to continue to face this challenge as we go through the phases, as more and more people become eligible to be vaccinated and we don’t have the vaccines in our possession to vaccinate them,” said Terrett.

But when asked if the health care systems want Gov. Kate Brown to order a pause in eligibility and push 65-year-olds back a few weeks to avoid putting more pressure on the current group, Terrett deflected the question.

“Our role in this process is to put a vaccine in the arm of a patient who has an appointment," he said. "We are leaving it up to the Governor and the Oregon Health Authority to make determinations as to when the phases start,” he said.

When asked about issuing a pause last week, Gov. Brown and Oregon Health Authority Director Patrick Allen said they would not alter the schedule.

Legacy's spokesman said the health system is doing the best they can with what they have and they are sorry its such a rough experience.

“We are incredibly sympathetic to the experiences people are having, and there isn’t a person who works for Legacy Health or who are a part of the mass vaccination site who haven’t felt that pain, and frankly we owe everybody an apology," Terrett said. "And the only thing we can do is promise to do our best and continue to improve to make this experience better."

Watch the full interview here. Its complete except for a few minor edits for clarity.

Have a comment or question for Pat Dooris? Email him at pdooris@kgw.com