Oregon will draw names at random on June 28. 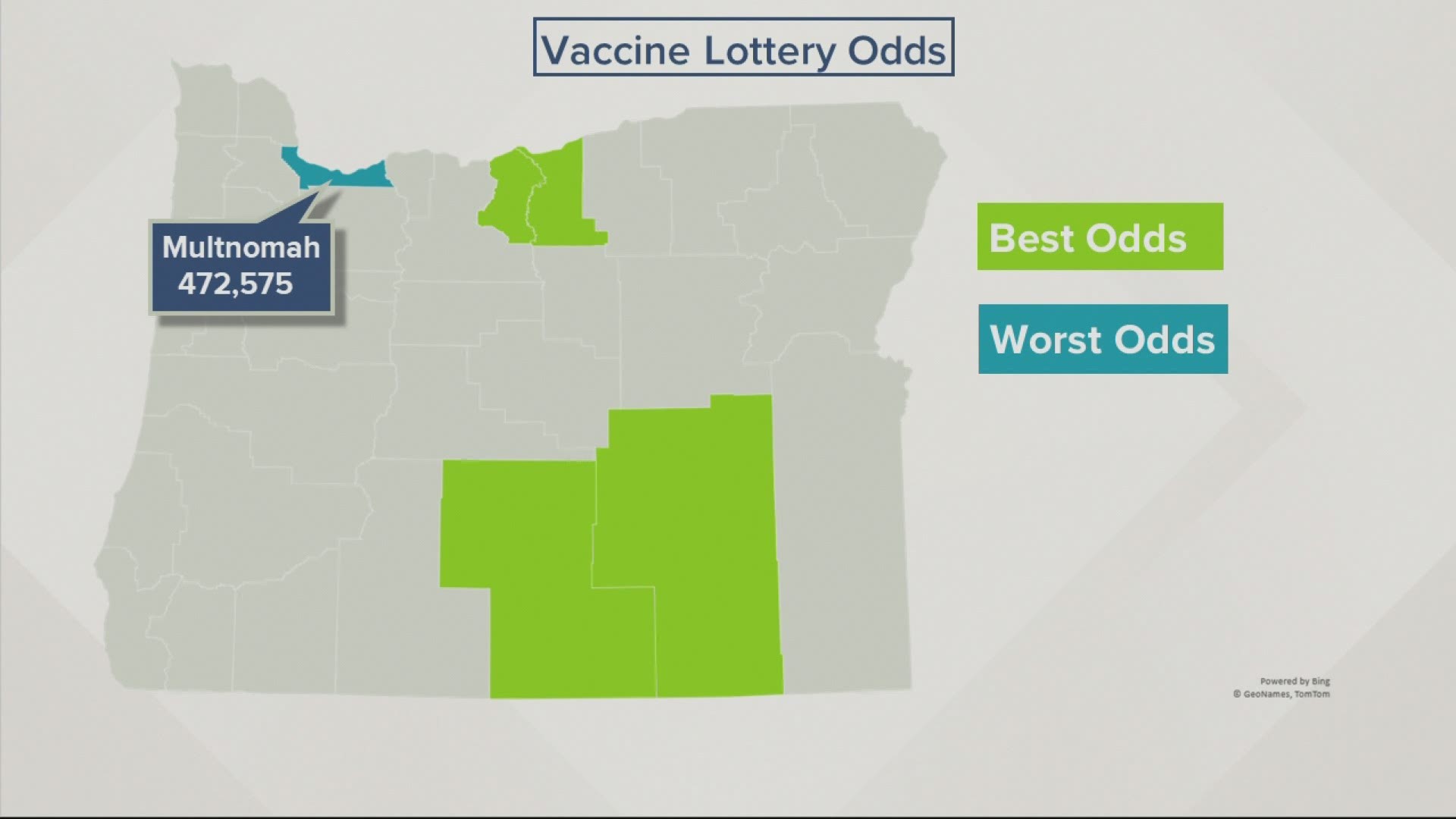 PORTLAND, Oregon — In the rolling hills of Wasco, Sherman and Gilliam counties, the population is sparse and the number of folks who have received COVID-19 shots are among the lowest in Oregon.

The odds look pretty good for the one vaccinated person who will be picked at random in the counties for a $10,000 prize under the state’s new lottery promotion.

In Gilliam County, 616 people are vaccinated as of Monday. That is not a typo. In Sherman county, 716 people have received a coronavirus vaccine shot.

Lake County and Harney County are the other two lowest with just over 2,300 each who were vaccinated for coronavirus.

While we're talking about it, the worst odds for that $10,000 county prize are in Multnomah County where your chance of winning the county prize is one in 472,000 and growing.

Is the county prize, the million dollar statewide jackpot and the five college scholarships of $100,000 motivating people to get their shot now?

Those on the front lines say its too early to tell.

“People didn’t seem to know about the state lottery quite yet Friday night,” said Kathy Schwartz.

She’s an emergency room nurse and a Wasco County commissioner, who is also board chair of the North Central Public Health District, which covers Wasco, Gilliam and Sherman counties.

Schwartz said Friday night the health district held a coronavirus clinic at a restaurant where a vaccination also knocked $10 off the meal. She knows the numbers are low in the three counties.

In southeast Oregon, Harney County now has plenty of vaccines, but not many people are looking for a shot. As of Monday, 2,339 people were vaccinated.

“We have not had a rush at the public health department of people wanting to get vaccinated since the governor came out and said there’s gonna be a lottery available,” said Nic Calvin, Public Health Director for Harney County.

He said most people who want the shot have it and others are trying to convince the rest not to get it.

“The people that do not want it, they're the ones that are on Facebook in our comment section doing everything they can to dissuade people from getting it - calling us every name in the book and and telling us we're doing a terrible job here at the health department,” he said.

He does think the county prize and the $1 million statewide jackpot will motivate some folks who have not yet made it a priority to get the shot.

Nearly everyone in Oregon who has received the coronavirus vaccination will be automatically entered into the random drawings. The last day to get a COVID-19 shot and qualify for the prizes is June 27.