Find updates on the coronavirus outbreak in Washington state from April 24-26. 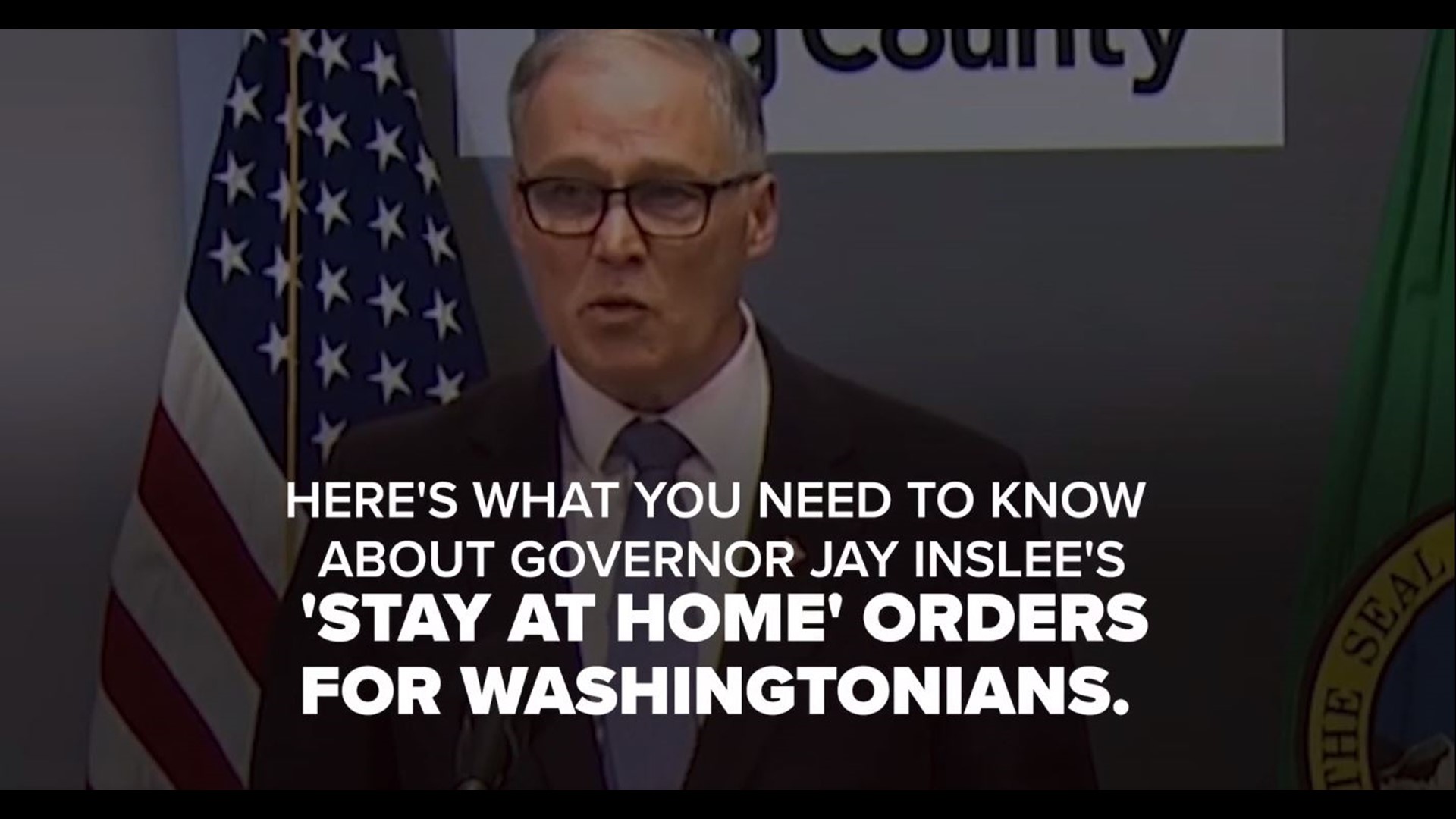 Editor’s note: This story shows updates about the coronavirus outbreak in Washington state from April 24-26, 2020.

Seattle closes streets for those trying to exercise during pandemic

Seattle will close six more miles of residential streets to vehicle traffic to create space for pedestrians and bicyclists during the coronavirus outbreak.

The closures began Friday in the Greenwood, Othello, Rainier Beach, Beacon Hill and Central District neighborhoods. That’s in addition to about 2.5 miles of street that were closed last week in the Central District and West Seattle.

Ultimately, the city wants to close about 15 miles of streets across Seattle in the coming weeks to nonessential vehicle traffic to give more space for people to practice social distancing.

Seattle’s initiative follows efforts from other cities, including Denver and Philadelphia, to provide more space for pedestrians and bicyclists.

China on Sunday reported no new deaths from the coronavirus for the 11th straight day.

The country also confirmed 11 more cases, raising its total to 82,827. Five of the new cases were in Heilongjiang province, a northeastern border area with Russia that has seen a surge in infections. Another was in Guangdong province, a manufacturing and tech region bordering Hong Kong in the south.

The other five were imported from overseas. China has identified 1,634 imported cases in all.

The Washington Department of Health is reporting 15 new deaths from coronavirus as of Saturday, April 25. That brings the total number of deaths to 738 among 13,319 overall cases across the state.

A total of 170,594 people in Washington have taken a test for coronavirus and 7.8% of those cases have been positive.

Dozens of workers at a Central Washington orchard have tested positive for COVID-19 but were apparently not showing signs of the illness.

Stemilt Ag Services, which operates the orchard, and local health officials tested the farmworkers in East Wenatchee after some fruit packaging warehouse workers tested positive. The company said it decided to expand testing to orchard workers as a precaution.

The company says of the 71 agricultural workers who were tested, 36 were positive for COVID-19. United Farm Workers and other advocates filed a lawsuit earlier this month against Washington state, arguing that farmworkers do not have adequate protections.

Seattle will close six more miles of residential streets to vehicle traffic to create space for pedestrians and bicyclists during the coronavirus outbreak.

The closures began Friday in the Greenwood, Othello, Rainier Beach, Beacon Hill, and Central District neighborhoods. That’s in addition to about 2.5 miles of streets that were closed last week in the Central District and West Seattle.

Ultimately, the city wants to close about 15 miles of streets across Seattle in the coming weeks to nonessential vehicle traffic to give more space for people to practice social distancing.

Seattle’s initiative follows efforts from other cities, including Denver and Philadelphia, to provide more space for pedestrians and bicyclists.

The Centers for Disease Control has updated its official list of symptoms people experience when they get sick from the coronavirus.

Previously, the only official symptoms of coronavirus were fever, cough and shortness of breath.

The updated symptoms list also add "difficulty breathing" to the description of "shortness of breath."

The CDC's website mentioned that many symptoms can appear two to 14 days after exposure to the coronavirus.

The U.S. Navy said the sailor is now being treated at a San Antonio hospital after being evacuated from operations at sea.

The U.S.S. Kidd will return to home port in Everett. The ship was on a counter narcotics mission in the Caribbean, according to Reuters.

The Washington State Department of Health confirmed 12 new deaths from coronavirus as of Friday evening. The total number of deaths rose to 723 among 12,977 overall cases in the state.

A total of 160,324 people in Washington have taken a test for coronavirus and 8.1% of those cases have been positive.

Researchers at the University of Washington are enrolling COVID-19 outpatients in several U.S. cities for a randomized controlled trial of the effectiveness and safety of two drug regimens – hydroxychloroquine and hydroxychloroquine with azithromycin.

Hydroxychloroquine is a malaria drug that was touted by Pres. Donald Trump as a potential treatment for COVID-19. He faced criticism for touting the drug, which has not undergone trials for treatment of coronavirus. According to the UW news release, it also has been confused with chloroquine, a drug stopped in a treatment trial in Brazil.

There is conflicting evidence on whether hydroxychloroquine works, which is why the research team at the University of Washington School of Medicine is conducting a rigorous trial to offer answers, according to the university.

The findings will determine whether a treatment looks promising enough for larger clinical trials and whether the drugs are safe.

Along with volunteers in the Seattle area, the trial will include patients in Boston, New Orleans, New York, Syracuse, and Chicago.

For more information about the UW's trial, including who qualifies, go to UW's website. To enroll, go here.

The city of Seattle has expanded its Stay Healthy Street initiative to streets in Greenwood, Othello and Rainier Beach, and Beacon Hill, to encourage outdoor movement while social distancing.

The city had already closed streets in Central District, West Seattle and High Point, and Green Lake to through traffic in the effort.

According to a city announcement, the wtreets were selected to amplify outdoor exercise opportunities for areas with limited open space options, low car ownership and routes connecting people to essential services and food take out.

Residents of those neighborhoods will be able to access essential services, recreate, and walk their dogs near their homes while protecting their neighbors by keeping 6 feet apart.

For more information and a map of the streets that have been closed to traffic, go to the City of Seattle Department of Transportation's website.

Nationwide, more than 88 million people have received payments in the first three weeks of distribution.

RELATED: When will stimulus checks be mailed? What to know if you're still waiting

'Low-risk' construction can resume in Washington

Governor Jay Inslee announced Friday that a deal has been reached to allow low-risk construction to resume in Washington state, marking one of the first steps the state is taking to slowly reopen the economy.

To resume work, existing projects must meet certain safety requirements, including maintaining social distancing, having adequate personal protective equipment and appointing a COVID-19 site supervisor. Sites must also have a coronavirus exposure, control and mitigation plan, and no work can resume until health experts say it is safe to do so.

President Donald Trump signed a $484 billion bill Friday to aid employers and hospitals under stress from the coronavirus pandemic.

Anchoring the bill is the Trump administration’s $250 billion request to replenish a fund to help small- and medium-size businesses with payroll, rent and other expenses. This program provides forgivable loans so businesses can continue paying workers while forced to stay closed for social distancing and stay-at-home orders.

The legislation contains $100 billion demanded by Democrats for hospitals and a nationwide testing program, along with $60 billion for small banks and an alternative network of community development banks that focus on development in urban neighborhoods and rural areas ignored by many lenders. There’s also $60 billion for small-business loans and grants delivered through the Small Business Administration’s existing disaster aid program.

Inmate released who was positive for coronavirus

The Lewis County Prosecuting Attorney's Office says it learned Tuesday that an inmate with COVID-19 symptoms was released as part of the program to ease crowding in prisons and curb the spread of the virus.

The Department of Corrections was aware of the inmate's symptoms, but didn't provide testing, according to the prosecutor's office.

The inmate was tested at a hospital after his release and the test came back positive. That person is now in isolation.

Masks may be used until a vaccine is available

The Kittitas County Incident Management Team asked residents to use cloth masks to prevent the spread of COVID-19 and suggested they may be in use for the near future.

"People should prepare now, for wearing cloth masks in public until enough people have received a COVID-19 vaccination to stop the spread of this disease,” Dr. Mark Larson, Kittitas County health officer, said in a statement Wednesday.