The head of the Oregon Restaurant and Lodging Association said it's time to return to 'business as normal,' even if the 70% goal isn't met 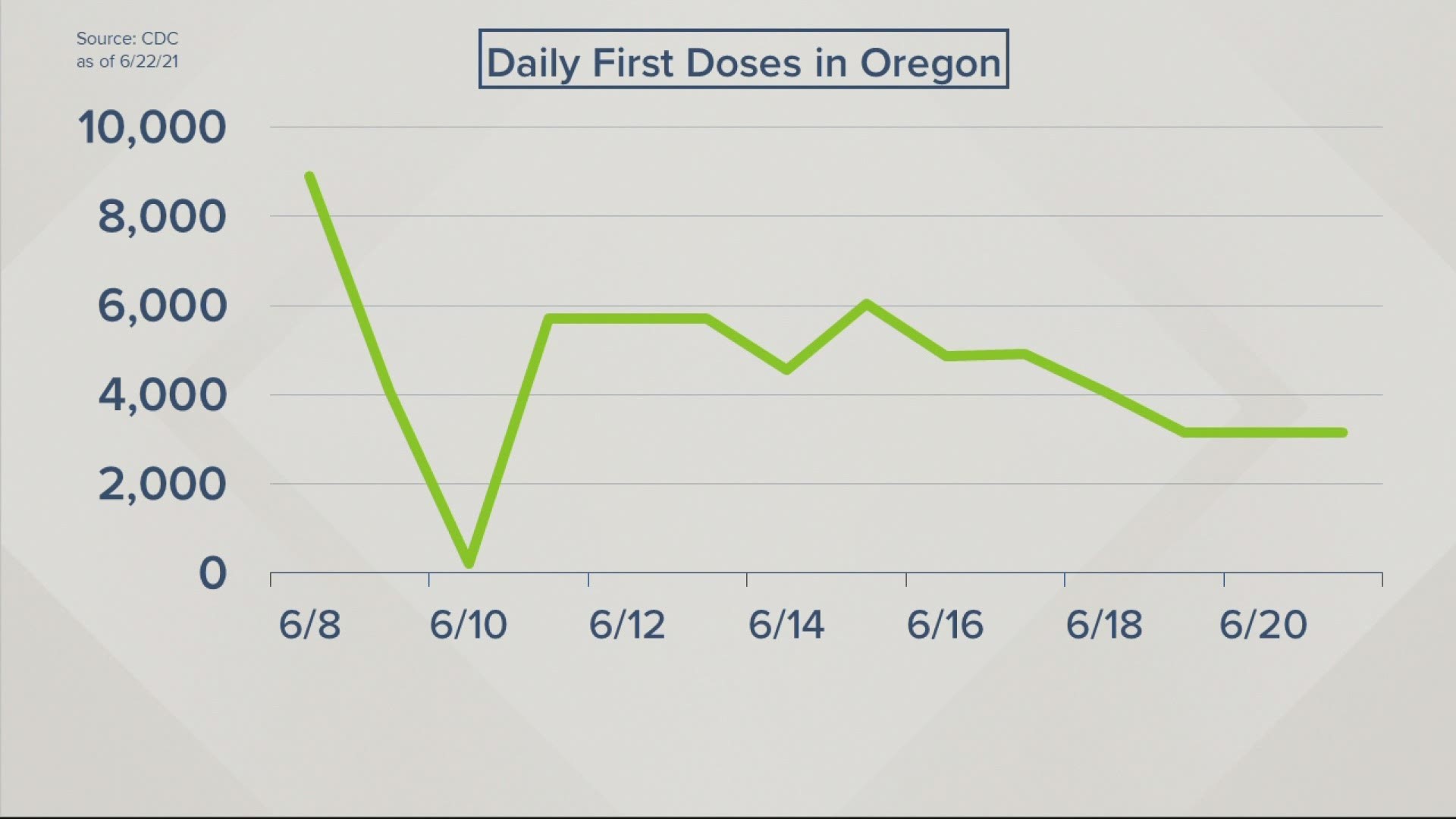 PORTLAND, Oregon — The leader of the Oregon Restaurant and Lodging Association on Tuesday said Governor Kate Brown should scrap her 70% goal for COVID-19 vaccinations and reopen the economy by June 30.

”At this point, based on how we’re seeing vaccinations pace down, a June 30 date in stone that everyone can rely on, that everyone can plan for... would be the best thing we could do to get our small businesses back on track,” said Jason Brandt, President and CEO of the ORLA, a trade organization that represents food service and lodging businesses.

Washington Governor Jay Inslee has said his state will drop most pandemic restrictions June 30, regardless of whether the state hits its vaccination goals.

On May 11, Governor Brown announced her goal to have 70% of Oregon adults get at least one dose of a COVID-19 vaccine. The governor said she'd drop nearly all restrictions when the target was met.

RELATED: Final week to get vaccinated for Oregon's vaccine lottery

According to the CDC, as of Tuesday, 2,304,729 Oregonians 18 and older have at least one shot, 68.8 percent of the adult population. The state is roughly 41,000 new people away from reaching the governor’s 70% goal. The pace of new vaccinations has slowed drastically in Oregon. Since June 8, the average daily number of new people getting a shot fell from roughly 9,000 per day to 5,000 per day, then 3,000 a day. According to the CDC only 1,082 people got their first shot on June 21.

Even at the pace of 3,000 new vaccinations per day, its highly unlikely Oregon will hit the 70% goal by July 4.

Brandt, from the restaurant association, said enough is enough. He said many people are vaccinated—and its time to return to business as normal.

“It does feel like we’re getting to the point of splitting hairs,” he said.

Not everyone thinks that is a great idea.

“I see it as important milestone," said Daniel Lopez-Cevallos, a professor at Oregon State University who studies health equity. "In terms of communicating and continuing to motivate the population to get vaccinated. But in my opinion, it has to go well beyond that."

He and others at OSU worry that efforts to vaccinate groups like migrant workers will fade after the state reaches its goal. Oralia Mendez, part of OSU’s Center for Health Innovation, said the state needs to keep working with health workers who understand the migrant population.

RELATED: Cherry harvest in the Gorge brings in hundreds of workers

“It’s really partnering with those community partners that are local and know the communities so we can reach our most vulnerable populations,” she said.

How should leaders use advertising try to motivate those who are not yet vaccinated? Professor Aimee Huff studies marketing around controversial things like the gun culture. She said the key to reaching remaining unvaccinated people is reminding them what they will not be able to do if they skip the vaccine.

“This late majority is motivated by peer pressure, by a sense they are             going to be left out if they don’t get vaccinated – so the messaging to that group needs to be really different than it was to the front group,” Huff said.

KGW asked Governor Brown’s office for comment on calls to scrap the 70% goal. They did not answer our question, and instead said the governor is "incredibly encouraged" over the millions of Oregonians who are vaccinated.

Have a comment or question for Pat Dooris? Email him at pdooris@kgw.com