Four months into the coronavirus pandemic and Oregon is seeing a rise in cases and health officials are expecting a decline in tests in the coming weeks. 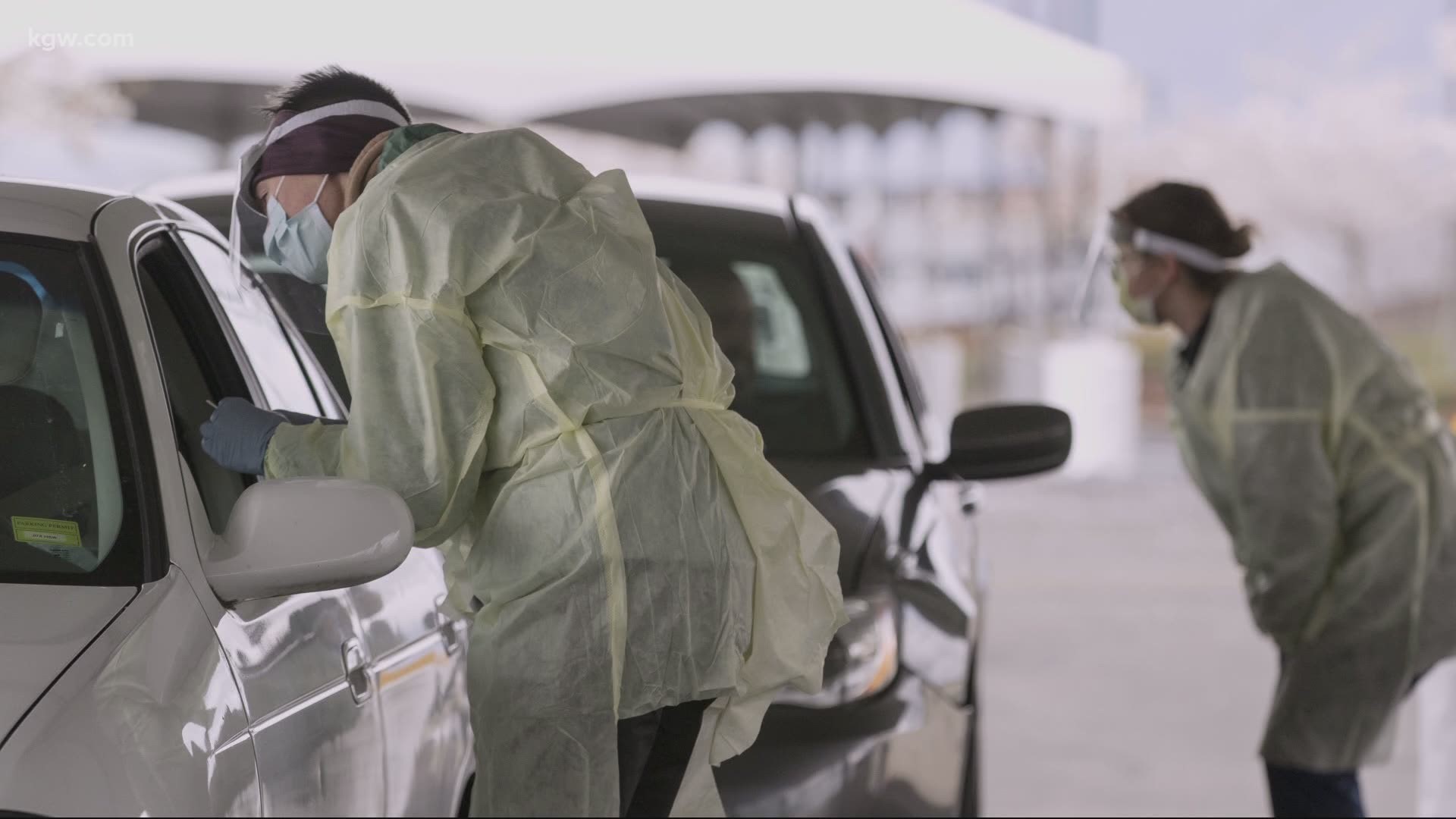 PORTLAND, Ore. — Oregon Health & Science University (OHSU) provides free, drive up testing for anyone who wants it without an appointment or a referral from a doctor, as long as they meet Oregon Health Authority guidelines on who should be tested.

They set up tents at the Portland Expo Center and Hillsboro Stadium, offering tests Monday through Saturday 9 a.m. to 4 p.m.

With the surge of COVID-19 cases in Oregon, it’s now a busy place. Just ask Kelly Primrose, who took her 23-year-old daughter to the testing site in Hillsboro Monday morning. Primrose snapped pictures of the experience because it seemed to take forever.

“As time passed, it became pretty evident we were moving less than a snail’s pace,” she said.

Credit: Kelly Primrose
Kelly Primrose with her daughter as they wait at an OHSU COVID-19 drive-up testing site

The hours stretched as their car crept from one tent to the next. Kelly said by the time her daughter finally got the test, they’d been waiting nearly four and a half hours.

“I did mention it to the swabbing guy. And he said, 'Yeah, tell our bosses,'” said Kelly.

Tamara Hargens-Bradley, a spokeswoman for OHSU, sent us a statement that read in part:

“Unfortunately, the increased demand has resulted in longer than usual wait times – frequently up to two hours and beyond."

The OHSU site is part of an effort that now gives Oregon a testing capacity of around 41,000 people per week, the most since the outbreak began. Still, that number is not where many think the state should be. On Monday, state health leaders said about 35,000 people a week are actually getting the test.

The number sounds big until you see national reports like the one in The New York Times showing Oregon is one of 34 states testing way below where it is supposed to be, according to the Harvard Global Health Institute. It shows the state testing about 48% of the number of people the institute thinks should be tested.

The Oregon Health Authority has a different goal, testing 2% of the state population each month. The OHA reports it hit that goal in early June.

In Multnomah County, leaders have noticed a change.

“What we’re seeing is there’s been a real increase in demand for testing. I think that’s probably both for people with symptoms but it’s also for a whole lot of people who are concerned but don’t necessarily have symptoms right now,” said Kim Toevs, the communicable disease director for Multnomah County.

She is asking people without symptoms to avoid getting tested.

As the number of cases in Oregon and nationwide surge, there is a sudden shortage of chemicals needed for the tests, which means the national labs are slow to report some results.

Local labs are still fast. OHSU said it can get results through its lab in one to two days. Legacy said its labs will report results in two to three days.

But Quest Diagnostics said it is overwhelmed on a national scale and most results will now take seven days or more. It’s a time frame that would be helpful to the person who is sick and the public health agencies trying to track and slow the spread of the coronavirus.

“You can imagine if we don’t get that test result for seven, eight, nine or 10 days, we may be getting the test result when they're actually almost done with the quarantine period and the infection has spread two to three more times since then,” said Toevs.

For all who have family flying in for vacation and thought you could get a quick test to make sure no one is a carrier? Think again.