Oregon thought it had controlled COVID-19, then came the surge

Over the past month, the confirmed case count more than doubled – surpassing 9,600 total cases. 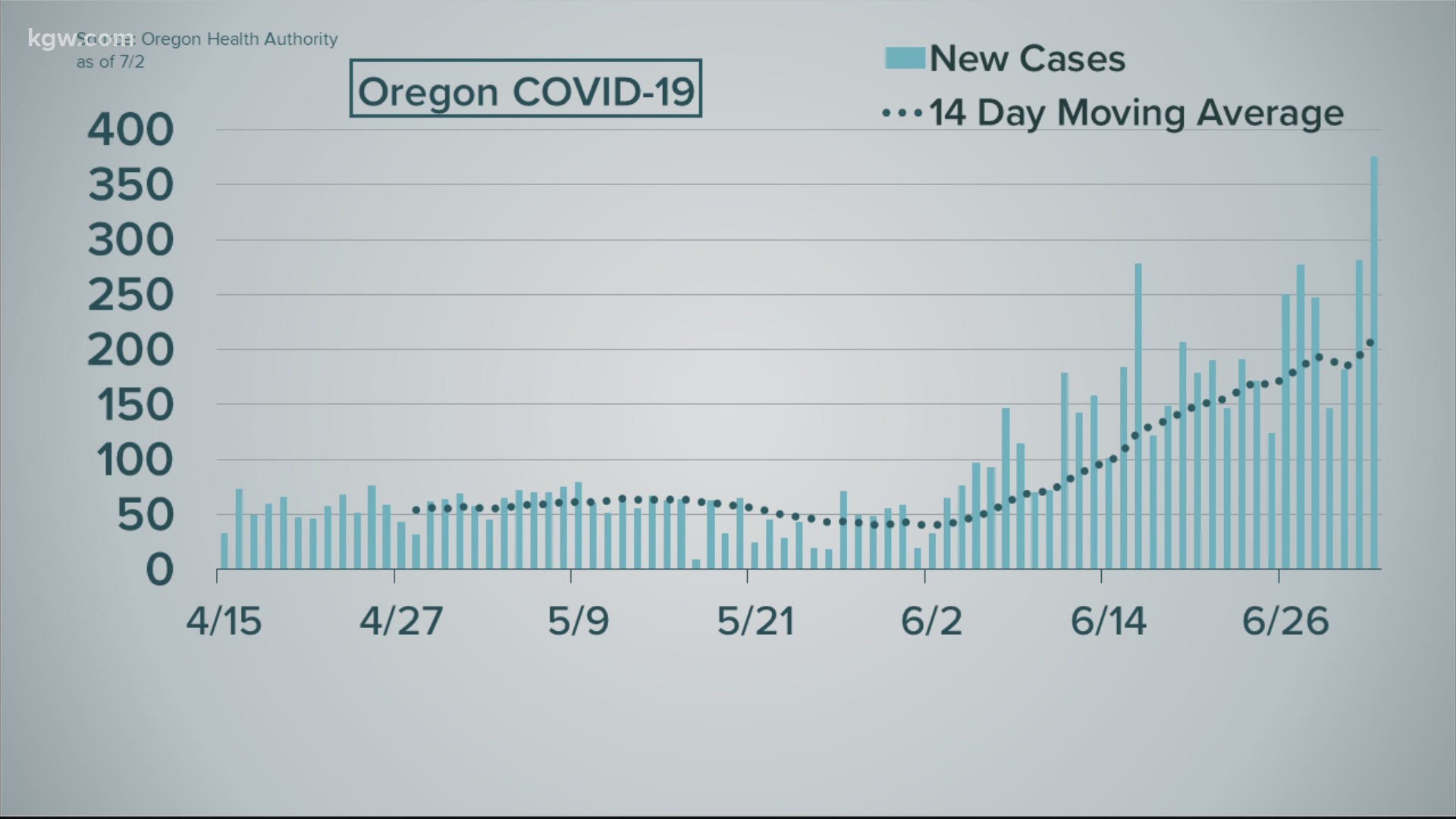 PORTLAND, Ore. — It was early June when the mayor of Newport, a small city perched on Oregon's coast, received a phone call that he had been dreading.

It was the county commissioner — two workers at a local seafood plant had coronavirus and others were being tested.

“When he told me that I thought, ‘Well… we are going to have a boatload of cases,’” Dean Sawyer said.

Up until then, Lincoln County, where Newport is located, had had fewer than 10 cases — overnight the number increased by 124. The rise escalated Lincoln County to the top of the list for highest cases per capita in the state at the time. News of the outbreak left residents and officials shocked and alarmed – COIVID-19 had struck home.

RELATED: Over 300 people have COVID-19 in Newport, OSU study finds

It’s a situation that has been happening during the past month across Oregon — coronavirus numbers surging and stretching into small communities that at the start of June had had few cases. The situation has Oregon teetering on the line of controlling the pandemic or becoming overwhelmed.

Throughout the pandemic state officials have boasted having one of the lowest infection rates in the country, which remains true. At the end of May, Oregon only had about 4,200 cases and until June, daily confirmed new case numbers never hit triple digits.

Some officials said the pandemic seemed “distant," as Oregonians watched the disease clobber other states, such as California and Washington where far more people have tested positive.

The Oregon Health Authority said Thursday there were 375 additional confirmed and presumptive cases of the coronavirus statewide. The previous record was 281 cases.

Over the past month, the case confirmed count more than doubled – surpassing 9,600.

Dr. Paul Cieslak, the medical director for Communicable Diseases for the Oregon Health Authority, called the numbers concerning. But, the numbers may get worse.

Researchers warn of the possibility of “exponential growth in new infections” in July.

Dr. Dean Sidelinger, the state’s epidemiologist, said Wednesday projections indicate that daily confirmed cases of COVID-19 could rise over the next month to more than 900 per day, with daily hospitalizations rising from 8 to 27.

The worst-case scenario, based only on increased transmission rates, projects that confirmed daily cases could rise as much as 20 percentage points, to 4,852 new infections a day, and hospitalizations could increase by 74 per day for a total of 82 daily hospital admissions.

While the case count has been increasing across the state, Cieslak said there have been significant increases in rural counties.

As of Thursday, counties with the highest cases per capita – Union, Umatilla and Lincoln, Morrow and Jefferson – are not home to Portland, Eugene or Salem, but rather have populations ranging from 11,600 to 75,000 people.

The sudden increases is overwhelming to the counties, Cieslak said, as the state sends help for contact tracing.

Union County, which has 129 cases per capita, is the center of the state's largest outbreak, after more than 235 cases were connected to a church.

RELATED: Here are the 10 Oregon ZIP codes that had the most new COVID-19 cases last week

Oregon also is affected by a coronavirus outbreak along its border with Washington.

On Friday, the Clark County Public Health Department in Washington said it is investigating a COVID-19 outbreak at a Vancouver restaurant and fears people who visited the facility June 19 to June 25 may be at risk of getting sick.

The surge in cases is not solely caused by workplace outbreaks or large gatherings.

These activities, Cieslak said, are the “most efficient transmitters" of COVID-19.

Health officials said this is especially concerning with Fourth of July around the corner.

While most events and fireworks displays have been cancelled or postponed, officials are mainly concerned with family and friends gathering for parties — urging them to keep it small and local, wear masks, practice physical distancing and wash their hands.

“If too many Oregonians continue to ignore these precautions, we could see an exponential growth in cases, and newly reopened communities and businesses could close again," Gov. Kate Brown said. "We have a chance, now, before the Fourth of July weekend, to make sure that Oregon’s COVID-19 numbers don’t follow the same skyrocketing trajectory of states like Texas or Florida or Arizona."

Cieslak had another piece of advice — if you are having a party with people from multiple homes, cancel it.

“Hold your backyard barbecue with members of your own family and have a Skype call with the rest of your family,” Cieslak said.

If people don't listen, the spread of the coronavirus could be detrimental, officials reiterated.

“A year ago at this time, around Fourth of July and graduation time, you could undertake these activities, but in the time of COVID-19 it is just not a wise thing to do,” Cieslak said. “These are the kinds of things that are going to drive our case count up and make us have to rethink whether we can safely reopen the state.”