New employment director plans to get Oregonians their unemployment benefits 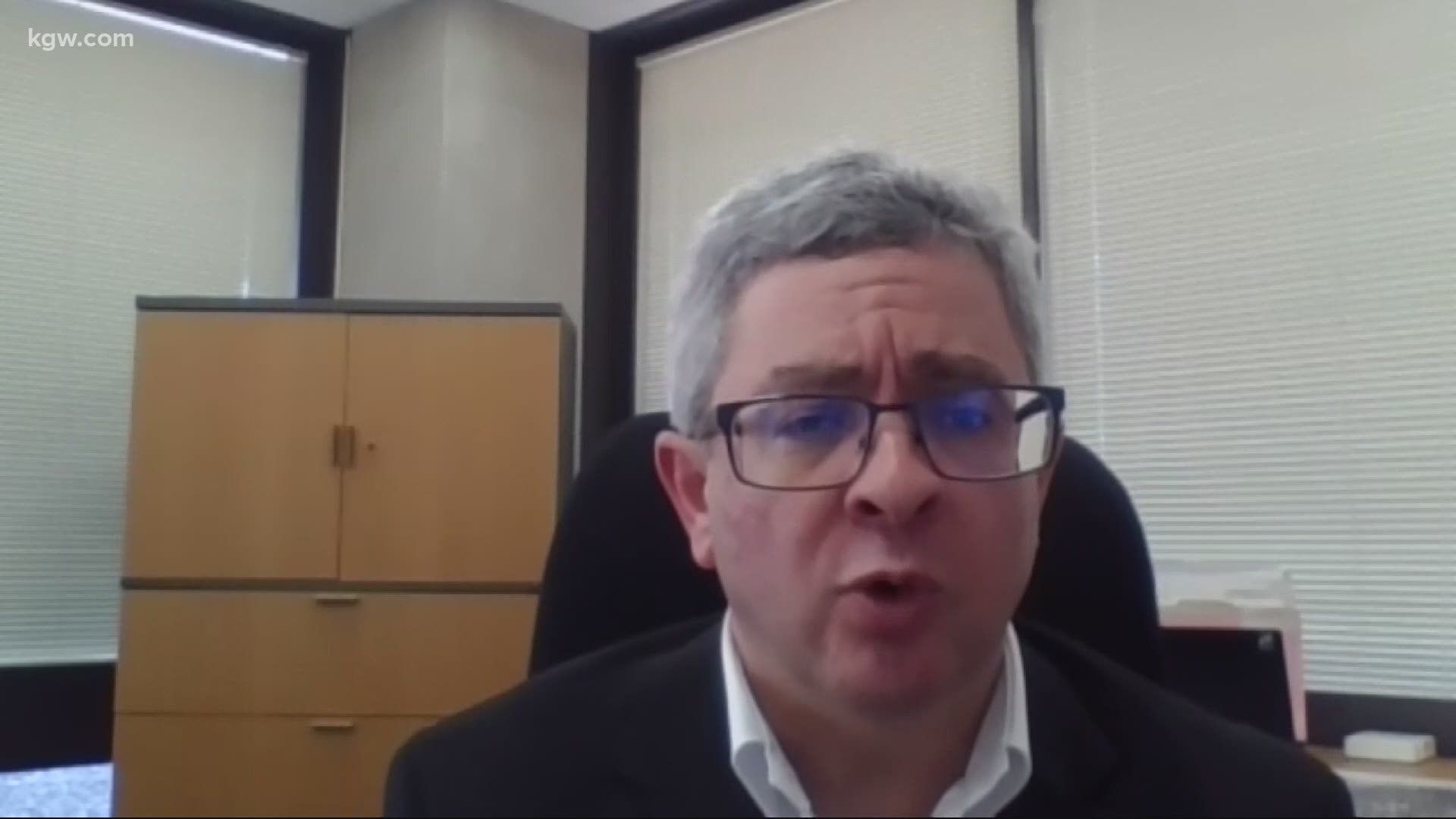 PORTLAND, Ore — A new interim director took over the helm of Oregon's employment department this week, while thousands of Oregonians still wait for their unemployment benefits, more than two months into the coronavirus pandemic.

KGW's Morgan Romero spoke with David Gerstenfeld about his plans to fix the broken system. He previously served as the Paid Family and Medical Leave Division Director in the Department. Prior to that, he was the Unemployment Insurance Division Director for several years.

Gerstenfeld said first and foremost, he plans on improving communication and transparency with the public. Through a new strategy called Project Focus 100, they plan to keep hiring more staff, call Oregonians to update them on their claim status and put the most experienced workers on the oldest, most complex cases in order to process all backlogged claims as quickly as possible.

RELATED: Survey: 2.76 million layoffs in May, far fewer than expected

So far, Oregon Employment Department has increased staffing by 600 percent in just a few months.

As of June 3, OED said around 461,000 traditional unemployment claims had been filed since mid-March. About 93 percent of those had been processed, but that doesn't mean all have been paid out.

Nearly 28,000 initial claims are still backlogged, which is lower from roughly 38,000 at the end of May.

But numbers don't include the tens of thousands of people who've filed for Pandemic Unemployment Assistance (PUA) for gig workers and the self-employed.

Gerstenfeld said the agency has started proactively calling people to notify them when their PUA applications have been received. They've added phone lines and infrastructure so more people can contact OED at once; they are hiring people rapidly and getting them trained up so they can answer at least some questions; and they've brought on volunteers from the state's legislative and executive branches to make outbound calls.

OED is also in talks with the National Guard about staffing to help with outbound calls.

Below are some questions and answers from KGW's interview with Gerstenfeld.

Q: Do you feel like that’s been one of barriers for people, is just not even knowing where in the abyss their claim lies?

A: I think the lack of communication for some people has been a big challenge. And we hear that frustration every day. Some of this is because the processes themselves were being built, some filed claims back in March before federal programs had even been created in law. Then, once they were created in law, we had to start implementing them, creating applications, waiting for federal guidance. While that explains the wait, for the people that don’t know that that have filed a claim, that are desperate to get benefits, they didn’t know. And that is really what we’re trying to do is both process benefits as quickly as possible and keep people up to date so they at least know where they are in the process."

How can we still be in this situation? How can people still not be receiving unemployment insurance in June?

It is incredibly frustrating and well beyond that. We know that people really need these benefits. I think the context is important. So if you go back to the beginning of March - the unemployment insurance program - we were dealing with record-low unemployment in the state. The economy was growing, it was the lowest unemployment rate on record. And that’s what we were staffed for. We receive federal funding to administer the unemployment insurance program and we have had several years of not receiving adequate funding from the federal government even under their own funding formula.

We have taken a lot of actions but we were not prepared, and frankly no state was prepared, for the volume of claims and complexity as all these new programs were created.

OED has a trust fund and is sitting on $80 million-plus worth of funding to help improve its antiquated system. What’s that money going toward right now and could it not be used previously or retroactively?

So the trust fund money that we have - and that’s where that 80-some-odd million is held - can only be used for certain purposes and the vast majority of it is only allowed by law to be used to pay benefits. The 80-something million was money the state received to improve the program. Oregon was actually able to hold on to that money. Most other states had to use their share to pay benefits to workers. Because Oregon has good trust fund model we didn’t have to do that. We’re holding on to that money, it’s been ear-marked for some time and we are spending it to modernize our technology systems. That’s an expensive endeavor to do and we wanted to make sure we had funding to do that.

But have you upgraded the technology? Because we keep going back to this antiquated computer system.

We haven’t upgraded it, we’ve made a number of additions and we are in the process of selecting the vendor who will do the work to give us the new technology. This is a complex system to replace and one of the things we’ve done is spend a lot of time looking at what other states did when they upgraded their systems. And some had projects that went pretty well, a number of states spent millions or tens of millions of dollars trying to upgrade their systems and had failed projects, or at the end had systems that worked but didn’t work sufficiently to deal with the current crisis.

Could we have maybe avoided some of the really problematic situations we’re dealing with in Oregon had we spent that money on modernizing our system earlier?

I really don’t know. It really depends on how it turned out. Again, if you look around the nation there are many states that modernized and some of them had to resort to paper applications during part of this process because their systems weren't stable or couldn’t keep up with the volume of claims, or had other problems.

Why are people still getting busy signals or getting disconnected?

Both of those relate to people not being able to get through because we don’t have enough people there to answer all the questions. We had multiple hurdles to overcome to let everybody who needs to contact us get through. Our phone system was designed for really high claim levels like we saw in the Great Recession and this is dwarfing that. So it wasn’t built to withstand the number of people that are calling on us now.

It’s been a balancing act of wanting to make sure people can get through to us, but also when they can get through to us that we can do something meaningful to give them some information. And we were just overwhelmed until we could get all of those pieces aligned: the infrastructure, the phones and the training. We’ve been working on that and we are continuing to scale up quickly. And the early results so far from Project Focus 100 of re-dedicating people towards those calls is showing initial promise. We know we need to get the phone lines even more stable and wait times much lower, but it seems to be helping so far.

Why didn’t we have a PUA number set up when the program was rolled out? We could have bypassed all these jammed-up phone lines.

I don’t think it would have helped the phone lines. I’m not going to say we did everything in retrospect would have been perfect. We stood the PUA program up in about four weeks from not even being a law that existed.

What would you tell people about your new leadership?

I’m committed to communicating as much as possible about where things are. That’s why we’re working on some of those outbound calls and other efforts to at least inform people about the status of their claims as much as we can even if we can’t process all of them overnight - which really is not feasible with just the historically never-seen-before number of people filing claims.

It will still be a challenge but I’m committed to making it work and being very open about what we’re doing and what the results are.