Since they can't test every patient, nurses assume everyone is sick. But if a health care worker gets COVID-19, they may struggle proving where they got it. 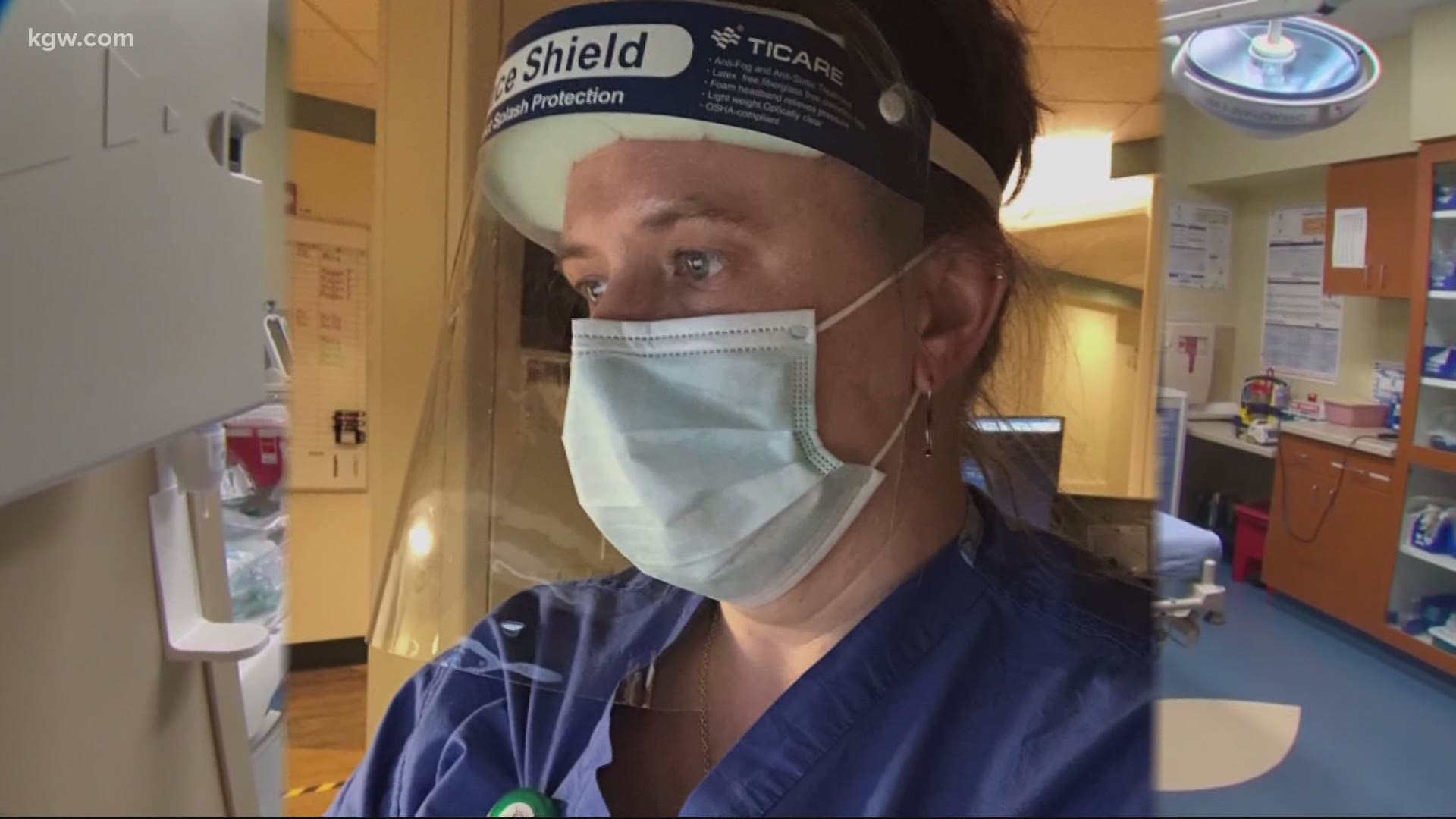 PORTLAND, Ore — One in 10 Oregonians diagnosed with COVID-19 works in health care. It's why nurses want to expand workers' compensation coverage during the pandemic, as many other states have in response to the health crisis.

Every day during the pandemic, health care workers like Virginia Smith risk their own health and safety.

"It's just, like, high anxiety. But as long as I have PPE - that's what we keep telling each other: as long as we have PPE," Smith said. “Knowing who to test when they come into the hospital has been a challenge.”

Since they can't test every patient, nurses assume everyone is sick. But that means if a health care worker contracts COVID-19, they may struggle proving where they got it.

"Therefore, it puts staff in a position where they're being expected to prove where they were exposed and whether or not it was in the hospital is unknown,” Smith said.

She said that becomes tricky when her colleagues get sick, or believe they were exposed, and try to file for workers' compensation.

"It puts them in sort of an unsupported position where they’re like, ‘Well I'm going to have to make a decision for my family and for myself to make sure that I'm not exposing coworkers and my patients but also take care of my family and pay my bills,'” Smith said.

The Oregon Nurses Association (ONA), a union for nurses, is calling on the state to give essential workers presumptive coverage, similar to what first responders have.

“The need is now,” ONA Communications Manager Kevin Mealy said. “For Oregon's nurses and other essential workers who cannot stay home, the people we're relying on to get us through this, we're asking for a presumption.”

Presumptive coverage extends workers’ comp by presuming certain workers, typically exposed to people with the virus, who contract COVID-19 got it at work.

"The core question is when you get COVID and it was most likely at work, will your employer be there for you, to ensure you get tested and get the treatment you need? That's what workers are asking for at the legislature,” Mealy said.

As it becomes harder to know where they got sick due to community spread, the union said the burden of proof shouldn't fall on nurses.

Oregon Consumer and Business Services data shows health care workers and nursing home staff are filing the vast majority of COVID-19 workers’ compensation claims. SAIF Corporation, the insurer for many business in Oregon, including a number of health care systems, had the highest volume of claims. Data as recent as early July shows they reported 515 claims. Self-insurer Providence Health & Services Oregon comes next, with 87 reported claims.

Of those people who were denied, Providence said the vast majority tested negative for COVID-19 and the others either didn't get tested or admitted they contracted the coronavirus in the community.

“We highly encourage nurses or any caregiver who feels like they've had a situation happen at work that had an impact - so I feel like I have COVID-19 illness or exposure - we encourage them to report that to Caregiver Health Services,” said Providence Health Oregon Chief Nursing and Clinical Officer Jennifer Burrows (RN).

Providence tells KGW that encouragement could be why their denial rate is higher than others'.

“We are seeing a lot more of caregivers becoming ill or testing positive because of interactions in the community,” Burrows said.

But for some of her colleagues, Smith said bearing the burden of navigating the system itself can be a nightmare and should be easier given the unprecedented circumstances front-line workers are facing.

“Getting to the bottom of it takes more time," she said. "Meanwhile, they're wanting to just be at home taking care of themselves and getting better, right? And having to navigate through why their claim has been denied is just very challenging.”

Last week, the Management-Labor Advisory Committee (MLAC), under the Department of Consumer and Business Services, submitted its report to Oregon Gov. Kate Brown, in part explaining why members were split on how to expand workers’ compensation during the pandemic.

The committee couldn’t agree on the best way to proceed. Members on the management side were concerned presumptive coverage is too broad. Instead, they prefer to go the administrative rule route. They feel there's another solution to create a more consistent approach to handling COVID-19 workers’ comp claims.

We're told the Legislature and governor are expected to take it up in the next few weeks.

RELATED: Here are the 11 Oregon ZIP codes that had the most new COVID-19 cases last week