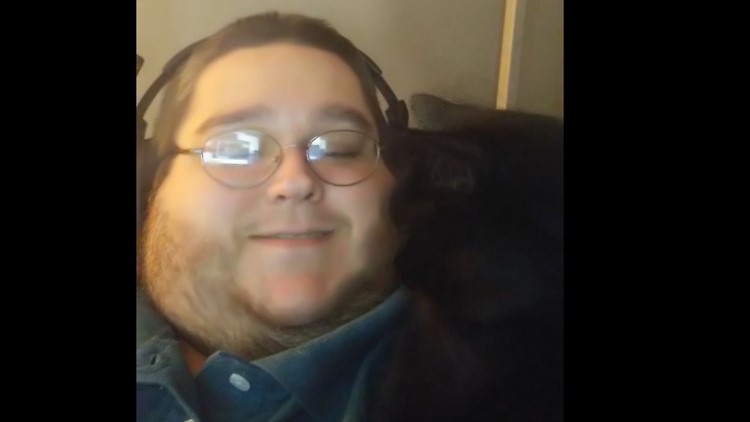 Photo by: Nathaniel Rankin
Portland resident Nathaniel Rankin, 34, waited 13 days to get his coronavirus test results back from a lab. He's pictured here with his cat, Jaina.

The lag reflects the chaos at some private labs that have become inundated and unable to handle a deluge of tests amid a global pandemic.
Author: Brad Schmidt | The Oregonian/OregonLive
Published: 8:14 PM PDT March 25, 2020
Updated: 10:44 AM PDT March 26, 2020

Nathaniel Rankin hunkered down in his Portland apartment after being tested for coronavirus, hoping to outlast a headache, fever and dry cough.

Rankin, 34, felt fortunate to get one of the scarce tests even though he fit the high-risk profile: He’s disabled and uses a walker to get around. He has underlying health conditions. He became sick with COVID-19 symptoms.

Rankin visited his doctor, submitted a swab, and figured he’d get his results back in a couple of days. Maybe five at most.

Rankin’s long delay may seem surprising – but perhaps not to those who have reported waiting six days, nine days or even longer to obtain their coronavirus results from private laboratories that now represent a growing share of all testing among Oregonians.

The lag reflects the chaos at some private labs that have become inundated and unable to handle a deluge of tests amid a global pandemic.

Through Tuesday, nearly 4,600 Oregonians and 345,000 Americans had received coronavirus results, according to state numbers and data collected by the COVID Tracking Project, a website aggregating state and national testing totals.

Countless others cannot yet be screened. The United States lacks enough tests to go around, suppressing the real tally and making it easier for the virus to spread from people with mild symptoms who do not know they’re infected.

Delays in confirming lab results leave people with the virus at risk of exposing family members if they don’t take precautions in shared households as they await diagnosis. At the same time, those delays leave people who aren’t actually infected facing unnecessarily long quarantines, unable to shop for groceries, see family or go outside.

Rankin’s extended wait exposes enormous challenges at ARUP Laboratories in Utah, which was name-checked during a recent White House briefing as one of the places that would help expand testing capacity nationwide.

In reality, ARUP ran out of supplies within days of accepting samples and stopped accepting new tests. ARUP sent some of the samples it already received – like Rankin’s – to other labs across the country.

Some of those labs, in turn, became overwhelmed and sent samples to third locations, The Oregonian/OregonLive has learned, adding days upon days to wait times for people throughout the United States.

The news brought both a sense of relief and frustration.

“The fact that there are so few testing supplies, and how hard it is to get a test result back – even if you can get a test – is ridiculous,” he said.

Thirteen days feels like an eternity in the age of coronavirus.

Rankin hadn’t been feeling well but put off going to his doctor’s office until March 12, hoping his bug would pass. That was the same day Gov. Kate Brown ordered the closure of all schools in Oregon through March, before later extending it through late April.

Rankin’s fever had risen to 100.4, he said, and he had a persistent, dry cough. He had body aches, fatigue and “a really bad headache.”

A physician assistant used a nasal swab to collect a sample from Rankin to check him for the flu. Then he went back to his apartment in outer Southeast Portland’s Powellhurst-Gilbert neighborhood.

Rankin learned after midnight that his flu test was negative. Checking his doctor’s online portal, he read a message from the physician assistant.

“We sent your test to be tested for COVID 19. We are waiting for this result to come back.”

Rankin didn’t necessarily think he was sick from coronavirus. At the time, just 347 Oregonians had been tested, with 30 of those confirmed infections, and no one had died.

“I thought the likelihood was small,” he said.

But Rankin wondered if he could have gotten sick from his sister, who fell ill before him. Rankin’s sister is a caregiver who spends time around vulnerable populations, who could have unknowingly been infected with coronavirus.

So he couldn’t rule it out.

Rankin’s situation posed a dilemma. He lives independently but, because of his disability, he requires assistance from a caregiver who visits three times a week.

He said he told the caregiver about the situation and she kept coming, pending the results of his test. He said he didn’t see the caregiver take any extra precautions or arrive wearing any specialized protective equipment, like a gown, gloves or mask.

In the days that followed, Rankin said his symptoms got better, then worse. On March 19, he still didn’t have his coronavirus results and had a virtual visit online with a doctor, complaining of shortness of breath.

By then, three Oregonians had died and Portland Mayor Ted Wheeler was drafting a stay-home order for city residents.

Rankin said he awoke this past Saturday with a coughing fit that left him on the verge of vomiting. He said he was told by a medical advice line to go to a local emergency department, which he did, via ambulance.

He spent about five or six hours in the emergency department before being told that doctors believed he had viral bronchitis, at the very least, he said.

On Monday, the governor announced a statewide stay-home order. More than 200 Oregonians had confirmed infections. A total of eight people had died.

Rankin called his doctor’s office, hoping for an update. He was told “there was no ETA on when I would get my test results” but the office “had my name written down as a high priority.”

Rankin said he has nothing but praise for his medical team in Portland.

The delay, he said he was told, stemmed from the lab where his test had been sent: ARUP Laboratories.

ARUP in Salt Lake City had been eagerly taking steps since at least early March to begin processing samples for coronavirus in the wake of the Centers for Disease Control and Prevention’s national testing failures.

The lab’s chief executive, Dr. Sherrie Perkins, was among those to meet with Vice President Mike Pence and the coronavirus task force in Washington, D.C., on March 4.

“ARUP has been following the evolution of the spread of COVID-19 closely, and we are using our extensive expertise and industry collaborations to bring diagnostic testing online very soon,” Perkins said in a statement after the event.

The lab later announced it would begin testing on March 12 – the same day Rankin got his sample collected.

ARUP is a nonprofit enterprise of the University of Utah. It accepts samples referred from other labs and, according to its website, serves more than half of the country’s academic-medical centers and children’s hospitals.

After just four days, ARUP announced it would no longer accept test samples because of extraordinary demand and supply constraints, including the chemical reagent used to extract RNA from nasal swabs.

“When demand exceeds our ability to deliver timely results, it’s in patients’ best interest for clients to send tests to laboratories with sufficient supplies to deliver fast turnaround times,” Perkins said in a statement accompanying the March 16 shutdown on new tests.

In a Q&A-style explanation online, ARUP wouldn’t say how quickly it would process the test samples it already received.

The full scope of patient delays at ARUP isn’t clear. But the lab acknowledged on its website that it referred “a number of specimens” to other laboratories for processing.

Rankin’s coronavirus test initially had been sent to ARUP, his medical records show. It’s unclear exactly what happened to Rankin’s test from that point forward.

But ARUP sent at least some of its samples to a different national company, LabCorp, according to a local medical official with knowledge of the situation. The official requested anonymity because the person wasn’t authorized to comment.

LabCorp also became overwhelmed and sent some of ARUP’s tests to Quest Diagnostics, the local official told The Oregonian/OregonLive.

LabCorp, which operates facilities in Arizona, New Jersey and North Carolina, didn’t respond to a request for comment Wednesday.

The negative test results arrived on Rankin’s computer screen Wednesday just a few hours before the Oregon Health Authority disclosed its latest results: 10 Oregonians have now died from coronavirus and at least 266 people have been infected.

It was a long two weeks, emotionally.

“The waiting and the uncertainty and seeing people who are asymptomatic get tested in the news, getting their results back in hours, was incredibly frustrating for me,” he said.

Learning that sports teams, such as the Philadelphia 76ers, could quickly score tests for players struck a nerve.

“If you’re a basketball team or celebrity, or rich and powerful, you can afford to get tested,” he said. “But the disabled and sick are waiting days or weeks. It seems backwards to me.”

Rankin is now feeling mostly healthier and looking forward to telling his sister and mother that they, too, can stop self-quarantining as a precaution, after each spent time with him.

No longer needing to remain inside, Rankin said he plans to go to the store to buy some eggs so he can make a favorite meal: a breakfast sandwich.

Meanwhile, other Oregonians are still waiting.

Mike Miller, 55, said he has been self-quarantining at his home in inner Southeast Portland since being tested for coronavirus March 16.

Nine days later, he’s still without test results and can’t even get a clear answer where his labs are being processed.

Miller said he’s had body aches, fatigue and a cough – but not a fever. Miller said he tested negative for the flu.

As a precaution, Miller has locked himself inside the master bedroom, while his spouse, Heather Poehler, took her clothes from the closet and moved into their 16-year-old son’s room. The son moved into the upstairs TV room.

Heather Poehler brings food to her spouse, Mike Miller, who has been waiting for his coronavirus test results for nine days. Poehler is a physician assistant and has been quarantining at home as a precaution until Miller gets his results back.
Heather Poehler

Poehler is a physician assistant at Portland State University. She hasn’t been taking any chances, wiping down the shared bathroom with disinfectant and sanitizing the doorknobs.

“My spouse puts on gloves, a mask, full safety glasses, to pass me food at the door,” Miller said.

Poehler, too, has been staying home from work in case she was exposed to the virus.

All they can do is wait.

“It’s very frustrating,” Miller said. “It’s just shocking that here we are, in what is defined as a pandemic, and you can’t get results back.”

RELATED: Three new people, all in their 40s, test positive for coronavirus in Clark County